A two-month visit from our 20-year-old granddaughter was filled with surprises and delights! 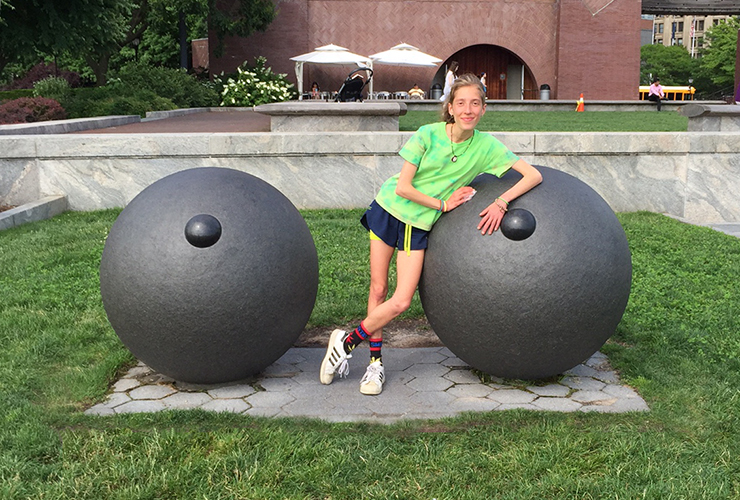 “Is that your grandbaby?” asked the gate agent at Kennedy Airport as she checked Rachel through to the area designated for Departing Passengers. “Sure is,” I said. For long seconds, my husband Noel and I remained at the gate, waving goodbye. And then she was gone. Hard to believe that our first-born grandchild was now a 20-year-old student heading back to Scotland and her classes at the University of Edinburgh. Otherwise, Rachel lives with her parents and younger brother Jonah in a rural village outside of Geneva, Switzerland, where she was born. Given the distance, we see the family as often as we can but not as often as we’d like.

Imagine our surprise and delight, then, when the phone rang last spring and it was Rachel, asking if she could come and stay with us in New York when school was out. It would be for a couple of months. “I hope to get a job,” she said, “but mostly I want us to spend more time together.” There were lots of ways she could help: “shopping for groceries, cooking some meals, seeing to it that Grandma gets out more and does her exercises….” The list went on. We didn’t need convincing. “How soon can you be here?” we asked. “Mid-June,” she said. We pulled out the trundle bed, laid out the welcome mat, and began counting weeks, then days, then hours ’till she arrived.

We were excited but wary as well. It had been a long time since we’d had a young person living with us. Would we find ourselves waiting up until we heard her key in the door? What were the rules? What were our roles? And what if something happened to her while on our watch? Would we be up to it? Relationships are not static. The increasing life span means that many grandparents have the opportunity to be in their grandchildren’s lives for many years, yet there are no guidebooks on how to be a grandparent at different stages of your grandchild’s life. We would have to play it by ear.

We worked things out. Take the matter of navigating the city. Her first week with us, Rachel had an appointment to meet someone in Brooklyn. We offered to drive her. “No thanks,” she replied. “That’s one of the best things about this city. I don’t have to drive or be driven around. Just tell me how to get there.” On a piece of computer paper, Grandpa Noel drew a crude sketch of the subway system—highlighting the route she would have to take. They went over the instructions. “Wish me luck,” Rachel said. When she reached her destination she was to give us a call. The excursion went off without a hitch. Day by day, Rachel grew more comfortable in roaming the city and we grew more comfortable with having her roam. We had much to learn from—and about—one another. Being with Rachel helped us renegotiate the grandparent/grandchild relationship on a more equal basis.

We admired her resourcefulness. A help-wanted listing that she found on the Internet turned out to be for a job that was tailor-made for her: summer counselor at a children’s day camp program on the Upper East Side. Monday through Friday, rain or shine, she would leave our apartment at just about the time the morning paper was being delivered, return home at half past three. Rachel loves to cook—a skill she picked up from her mom and maternal grandmother. About once a week, she would hit Trader Joe’s to shop for and then prepare a delicious dinner. (I actually asked for a second helping of tofu.)

Mostly, she wanted us to be up and doing. We had become far too sedentary. Her energy challenged our complacency, and that was good. “What’s the plan?” our granddaughter would want to know within minutes of stepping through the front door. Sometimes we had a plan, but more often we were less ambitious. “Is there a movie that you’d like to see?” we might respond. Or: “How about going to 16 Handles for a frozen yogurt after dinner?” We were open to suggestions. “I read about a great music group called Banda Magna performing in the summer garden at MOMA later today,” she announced one Thursday afternoon. “The museum is open until nine tonight. It’s okay if we don’t arrive there until six.” Now that was a plan. We got to the museum with enough time to tour the Rauschenberg exhibit, then inch our way into the crowd at the concert. The music was stirring, the weather perfect, and the setting magical, an oasis within this busiest of cities. Only in New York, I found myself thinking, and began falling in love with our city all over again.

New York has always been my kind of town. It’s where I was born and raised, went to school, met and married my husband and brought up our three boys. (The oldest is Rachel’s father.) When others were heading for the suburbs, we headed for Central Park. “How can you raise a child in the city?” our suburban and out-of-town friends frequently challenged my husband and me. I was tempted to reply, “How can you raise children anywhere else?” To underscore my point, I wrote a guidebook called A Great City for Kids. What I learned from Rachel’s visit is that it’s A Great City for Grandkids as well, especially when they’re old enough to do some exploring on their own.

What you need is a Metrocard and a good pair of walking shoes. Toting an enormous backpack, Rachel would walk New York from the High Line to the Hudson, Chelsea to Chinatown, East River to the Upper West Side, every step leading to a possible adventure. “What do you like most about the city?” I asked her one day. “Its diversity,” she answered. “You never feel like an alien because you’re surrounded by people from all backgrounds and all walks of life. You’re seeing different neighborhoods and you connect with certain places, discovering things about yourself and other people. I never get bored with it.” Listening to her, I remembered having felt the same about wanting to explore the city. I would take the Number 5 bus, which then ran the length of the West Side from the Cloisters to South Ferry, exit at any stop according to whim, and then walk up and down the streets, trying to find each neighborhood’s special rhythm: What kind of people live here? Where do they work? Where do they shop and play? Rachel made me want to explore again.

“It’s also great that there’s a ton of free and unexpected events,” she continued. “You can find what’s happening on Facebook or the Internet—and even specify what area of the city you’re interested in. For example, on a Sunday when you and Grandpa were away, I caught a performance of the break dance group, Rock Steady Crew, in Central Park and, in another part of the Park, also came upon a comedy event that I hadn’t found listed. Later that same day I attended the finals of a Double Dutch Competition held on the plaza at Lincoln Center. It was incredible. When you go to an event like that as a bystander, you’re able to partake in someone else’s culture. It’s very enriching. You get to be yourself but you also get to be a little bit of everybody else who’s there. That’s what I love most about New York.”