Sorting out the belongings of your parents’ home can be daunting and upsetting, but hiring estate appraisers and other professionals can expedite the process. 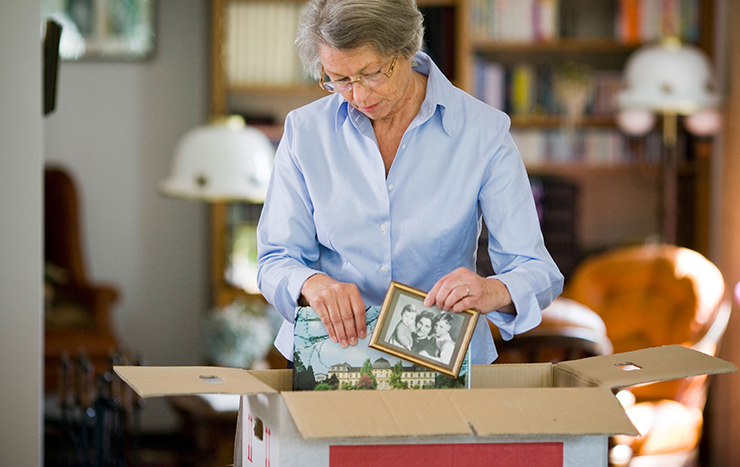 I am six years old and the family has gathered in the home of my beloved grandma, Bubbe Chana, recently deceased, to sift through her belongings and decide who would get her samovar, who the collection of her china cups, and what to do about her well-worn sofa. While the grownups deliberate and decide, I tiptoe into my bubbe’s bedroom, half-expecting to see her there. In a partly open drawer of her night table, I find a bar of soap decorated with a colorful decal and legend reading: Jack jumped over the candlestick, and I know for a certainty that my grandmother wanted me to have it. I slip the soap into my pocket. It is my first experience of clearing out a loved one’s home.

Clearing out your parents’ home shortly after their death or recent relocation to an elder care facility is a task that many of us shudder to even think about. And then one day we’re there—sorting through a lifetime. It is an emotionally draining experience. “There are decisions, decisions, decisions, and they all have to be made yesterday…under a cloud of grief,” says a woman who has been there. “Going through your parents’ closets and dresser drawers, riffling through their papers is invading someone’s privacy even if that person is no longer alive. You have the feeling that you ought to knock before entering.”

I recently spoke with people who’d gone through the process within the past year and a half and asked them to shed light for others. Though each person and family is different (as is each estate), I do believe we can learn from one another and, in our own homes and families, start a conversation.

“People let go in their own way,” says Ellen, a friend who excels at getting things done, “My way of dealing with things is that I gird myself to doing what needs to be done and then it’s after the fact that I have the emotional consequences.” And so, when her mother entered a senior residence at the age of 96, what needed to be done was to empty the house in Boston that she’d lived in for 53 years (the home in which Ellen and her brother grew up) and prepare it for sale. “I lived 220 miles from my mother,” says Ellen, whose home is in Riverdale, NY, “so I tried to get as much done as possible as quickly as possible. Distance is a factor.”

Step #1 called for culling through her parent’s papers. “My husband Bill helped with sorting, identifying the papers that needed more attention while I set aside others to be kept in perpetuity, like my parents’ ketubah (marriage contract) plus one bag that I filled with photos that are really irreplaceable.”

Step #2 was calling the local realtor. “This is something I highly recommend,” says Ellen. “He gave us the names of people who buy things from estates (this one for furniture; that one for costume jewelry) and then sell them at local flea markets. So far, so good. The buyers came and chose what they wanted. Then my brother arrived and basically undid everything I’d arranged. And let me tell you, the merchants were upset, I was upset, and the realtor who had recommended these people wasn’t too happy.“ 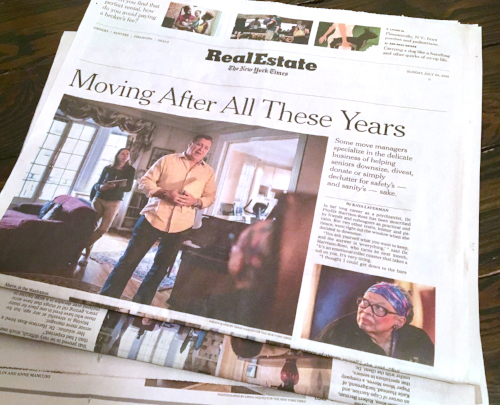 “It’s not unusual in my practice to see siblings disagree,” says Katie Hustead who owns, with her husband Joseph Weston, Paper Moon Moves in Park Slope, Brooklyn. Hustead is the incoming president of the National Association of Senior Move Managers. [About 70% of our work is helping older people move and the rest is clearing out estates.] “You may have one child who is closer to the parent for whatever reason and that child engages us to help clear the estate. Then the inactive one swoops in and says, ‘Why did you send that piece to auction? Why did you make those decisions without me?’  It’s strange. You’d think they’d be fighting about valuable stuff, but that’s seldom the case.”

Clearing out a home is easier when brothers and sisters (and don’t forget the grandkids) share the task. Rhonda, oldest of four siblings, lives a short drive away from the gated community where her parents lived. A sister also lives nearby; her brothers live at a distance, but they are all in close communication, so they were well aware of what awaited them when the time came.

“Dad had always been a bit of a hoarder, which only got worse as he grew older,” Rhonda explains. “Wherever you would look in the apartment there’d be piles of books, CDs, paper, bags, bottles, cans—and I don’t mean cans dated last month! He would get very aggressive if any one of us ever went near his stuff and that would upset our mother, so any cleanup would have to wait. Mom died a little more than a year ago and Dad moved to assisted living. We then began the process of digging out, getting the apartment ready for sale. There was no serious dissension among the siblings. We kind of had a motto that went: if there’s anything anyone wants, you’re welcome to it.”

Where to begin? “We initially had a conversation with the broker who suggested hiring a liquidator: You pay a company, say, five hundred dollars and they take everything. They either sell it for you or dispose of everything. His points were, 1) time is money, especially if you want to place a home on the market soon; and 2) sometimes people have an unrealistic expectation of what their items can sell for. We decided against taking his advice. That meant we’d have to go through everything by ourselves, closet by closet, room by room. One of my brothers found a company that would buy Dad’s CD’s, another found a customer for his vast book collection. The rest pretty much went to the Salvation Army or the dumpster. It was months and months of hard, physical work. To an extent, you expand the work to the time that you have.”

Says Katie Hustead, “People think they’re going to fly in for three days and they’ll be able to get through with everything they need, and they go a little crazy ’cause they’ve worked so hard.  It’s very time-consuming. Going through the paper work alone takes forever.”

“I ended up taking three large plastic boxes filled with papers to my home to be gone through later,” says Rhonda. “I just couldn’t deal with them at the time. When I did get to go through them, I found playbills and programs from events that I had taken Mom to. She had saved them. I remembered the many good times that we’d spent together. And it was bittersweet.”

Part II:  Where to turn for help

Before you start pulling things from cupboards and closets and separating them into piles marked “Keep,” “Sell” and “Give Away,” you might want to hire someone to assess. what items have value. “If your realtor recommends somebody or your estate attorney recommends somebody, by all means look into that,” says Julie Hall, an estate expert and appraiser based in Charlotte, North Carolina, and author of The Boomer Burden: Dealing With Your Parents’ Lifetime Accumulation of Stuff. “These people know who we are in the community and they know who’s good and who’s not good. Once you identify the person, it’s important to do a little research and check them out.”

Everyone seems to have a favorite story. Julie Hall’s may be about the time she rescued two vases from a box of items that were to be donated to charity and sold them for $57,500. (Shades of Antiques Roadshow.) Fees for appraisal services range widely, depending on where you live and the credentials of the professional. Hall charges $125 an hour. The average cost for senior move management services is $40 to $70 an hour; in New York, it’s more likely to run $90 to $125 an hour. Check the credentials of anyone you’re considering hiring.

“So supposing that I have to clear out a house…my parents had nice-enough things, but nothing that stands out as special; how can I justify the expense of calling in a consultant?” I ask Hall. “If you get someone to walk through the house for an hour or two,” she answers, “consider it an insurance policy.”

A model move
“It was sort of a three-stage move,” says Brian, the youngest of three sons. “When our father and mother downsized from a house to a 4-bedroom apartment, they spent a lot of time deciding how to divvy up stuff. When they moved to a 2-bedroom apartment in an assisted living facility, they again spent time deciding what they wanted to keep, what they wanted to give away and what they wanted to throw away. They did the bulk of the work. Clearing out their final residence was more like a trip down memory lane than a chore. Sad, but affirming. It’s a heritage I hope to pass on to my children.”

You may enjoy other NYCitywoman stories by Claire Berman: Peggy is Still Mom’s Favorite, What Aging Parents Don’t Want to Hear, Learning to Ask Others for Help, and Soldiering Through Your Child’s Divorce.