Sibling rivalry often escalates in your 50s and 60s when issues of eldercare and inheritance develop. 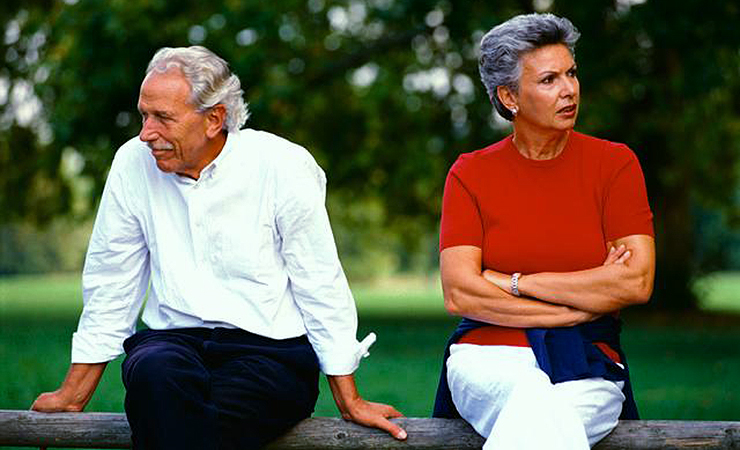 “My sister Doris and I haven’t spoken for years,” says Helen, 62, a dealer in fine prints who lives in Connecticut. “Although she’s 5 ½ years older, we were very close as kids and even as young adults. Then we both became busy with marriage, careers, and children, so I didn’t really notice the distancing. One day I realized that I was always the one who initiated contact. When I’d suggest getting together, no time seemed to be convenient. ‘What’s wrong?’ I asked. She never answered; she just pulled away.

“Perhaps she felt that I made a more successful marriage,” Helen says. (The names of all siblings have been changed.) “Perhaps she resented that I was much closer to our mother. I don’t know. Looking at our photographs as kids, I realize that my sister’s sense of alienation started early. You see our brother, Dave, tall and handsome. You see me, ‘the baby,’ looking adorable. And you see Doris, the middle child, always with an angry look on her face.”

For most of us, sibling relationships are marked by closeness as well as rivalry. Brothers and sisters play together, squabble, support one another, push each other’s buttons, kiss and make up. The competition can be healthy. In many ways, our siblings define us. If brother Johnny’s the daredevil and sister Suzy’s the artist, we may (in a process known as de-identification) be spurred to find our own identity, what makes us special, and mark our own arena. Sibling envy becomes edgier, however, when Mom or Dad plays favorites—singling out one child for special attention or treatment and thus setting up a situation where the less favored sibling becomes resentful and the golden child defensive. In the best of circumstances, such feelings of jealousy are left at childhood’s door. Unresolved grievances carried into adulthood, however, can (and often do) lead to sibling quarrels, cutoffs, even to the courts.

“Who Does Mom Love Best?”

To be estranged from a brother or sister can be very uncomfortable, even painful, but it’s not unusual. Some years ago, psychologists Helgola Ross and Joel Milgram conducted a noteworthy study of adult sibling relationships and found that over half of subjects aged 22 to 93 still felt rivalry with their brothers and sisters, primarily over parental favoritism. For Jeremy, 44, a book editor who lives in a Boston suburb, parental partiality for his sister Marjane, 40, still plays a dominant role in their disintegrating relationship.

The seeds of their conflict were sown early. “I wouldn’t say that my parents preferred Marjane to me,” Jeremy says, weighing his words. “I will say that as a child my sister was—and still is—the focus of all their attention. Marjane is an athlete—she’s good at everything, but gymnastics was her sport. This meant that our parents were constantly busy driving her to and from practice. On weekends I’d be dragged along to interminable competitions. Everything revolved around Marjane’s needs. If I never see another balance beam, it’ll be too soon.”

Years went by. Jeremy, “the studious child,” found his niche in academia, earning a BA and PhD with honors at top schools. Marjane attended a less rigorous college on a gymnastics scholarship, then was shocked when she wasn’t accepted by a top law school. “As an athlete, you can’t just turn that competitiveness off when you leave the arena,” Jeremy says. “My sister was not used to being a failure. She became very bitter. She took her wrath out on everyone, and I felt she begrudged me my success—although she got into law school later. That was a turning point in our relationship.”

Marriage, too, is a common trigger point for adult rivalry, and it has complicated their fractious relationship. “Marjane never had positive feelings for my wife,” Jeremy says. In turn, he has no use for his brother-in-law. “The man has no drive, no ambition at all,” he says. “It’s my sister’s legal job with a small firm that supports the family, which now includes three kids, along with generous child-care and financial help from our parents.”

For Jeremy, it’s still all about Marjane. “Part of my reluctance to have a better relationship with my sister is that any time I see my parents, the conversation is only about my sister and her husband and their kids,” he says. “If you’d ask Mom and Dad how my daughters were, you’d probably get a one-word answer: Fine. Because they have no idea what our kids are doing. I’ve been through various stages of grief and anxiety and all that, but that’s the way it is, and at this point I just accept it. I don’t hate my sister. What I feel about our failed relationship is a deep-seated regret.”

Caring for an Aging Parent

As parents age, longstanding tensions between siblings can resurface. My friend Sue, a graphic artist, has been flying from her home in New York City to Florida almost every other weekend to oversee the care of two ailing parents. This is not just taking a toll on her work and well-being; it’s also extremely expensive—a fact that is lost on her two older brothers, who see her role, as does her mother, as “what daughters do.” The situation has reopened some wounds of childhood. “As boys, my brothers were always given more freedom than I was,” Sue says, “and here we are again.” Sue has begun to see a therapist to help her deal with the anger.

Even close and caring siblings sometimes find themselves at odds over inequitable involvement in a parent’s care, finances, “what’s the best plan for the folks.” One sister may suggest finding a senior residence because “Dad needs to be around other people.” Another says, “Over my dead body will I agree to place our father in an institution.” It’s not unheard of for sibling relationships to be permanently severed by harsh words uttered when all are under stress. This explains why many people are now turning for help to the growing field of elder mediation: using a trained, impartial, conflict-resolution specialist to keep them from getting bogged down in their positions.

Elizabeth Clemants, a Tribeca-based social worker with a busy mediation practice, explains, “You want to be able to look at the issues from everyone’s perspective. If the parent is still with it, he or she can be part of the mix.” In Clemants’s experience, most family conflicts are emotionally based. When an experienced professional helps people get to the heart of the emotion, they are in a better condition to make a logical decision.

“A brother and sister came to see me because they inherited a house,” Clemants says. “Neither could afford to buy the other out, but they were unable to reach agreement about what to do with it. If they got along better, they would just sell it, split the money, and it would be easy, but because they carried a lot of resentment about who was Mom’s favorite and who had the more advantageous life, the house simply provided them with another area of conflict. What a mediator could do (and the courts cannot do) is say, ‘Okay, let’s set the house aside for a second. It looks like you guys have a lot of bad feeling about other things.’ Then the brother brought up last year’s Thanksgiving. ‘My wife spent a lot of time cooking, and you arrived late and never thanked her.’ And the sister responded, ‘We always have to have Thanksgiving on your turf, with your friends.’ Once they got to talking about what was actually driving the conflict, they were able to turn a corner where they could logically approach what to do about the house.”

Legacies of Ill Will

Following a parent’s death, many siblings face a new crisis: dividing up the parent’s estate. It need not be a large estate to cause contention. “By the time my mother died, she had run through her cash,” says Florence, 59, who had also served as her parent’s primary caregiver. “There was a $20,000 life insurance policy and the belongings of her modest home in a small town in Wisconsin. The will basically left everything to me and my sister, without specifying who gets what or recognition of who did what. My sister hired a lawyer, which surprised me. It wasn’t as if we had family heirlooms to divvy up. I think the two of us could have solved things like who gets the Wedgwood vase, but now everything had to be valued and accounted for. Plus there was the lawyer’s fee, which came out of the estate. Family ties dissolve over stuff like this.”

Certainly that’s evidenced in the antagonism that’s arisen between brother Leonard and sister Beth, both in their sixties and convinced of the rightness of their claims. Beth is upset because her adored mother left a house and considerable money to her younger brother. It’s not that Beth needs the money for herself, her children, or her grandchildren, she will tell you. She’s angry because, as she sees it, her brother took advantage of their mother’s generosity for many years. “There was a time when he needed help,” she admits, “but then he married into money. He never told our mother about his wife’s inheritance. He was going to get everything and I was not going to get any reward for my good work. So, yes, there were enormous problems with my mother’s will.” Both hired lawyers. “We offered deals; Leonard wanted everything. Five years later, there are issues that are still not resolved. I doubt that I will ever speak to my brother again.”

“The most classic challenge that I come across in wills is where one person is treated differently than their siblings,” says Jordan Atin, a Toronto-based specialist in estates law and co-author of The Family War: Winning the Inheritance Battle. “What we often see is that the roles in a family are re-created in the will. You have the victim, you have the controlling sibling, you have the person who’s caught in the middle—often it’s a daughter who finds herself between two brothers. People think a will challenge is all about greed. It is not about greed. It’s all about settling the score. And once lawyers are involved, it is very difficult to get back that initial relationship.”

Atin recommends steps that you can take now to prevent conflicts from developing after you are gone:

Understand the importance of a will to your children. It’s more than just giving away your property.

Understand the expectations of your children, and keep in mind that dividing your property makes for a complex situation.

If you’re not going to meet the expectations of your children, then have the guts to talk to them while you’re alive and explain to them why you’re doing what you’re doing. Example: “I don’t think that you’re good with money, and so I’m putting your money in trust.”

Don’t ever put one child in charge of another child’s money. That is a terrible dynamic.