All too often, parents and grandparents can be devastated when their kids call it quits. 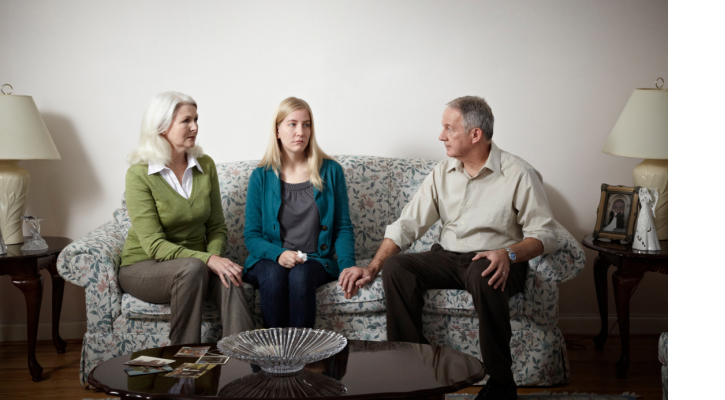 For the last six years, Sue and Stan Howard have been going through a tough divorce. During that time, they confide, they’ve spent “an outrageous amount of money” on legal fees, plus support costs for a second household; suffered many a sleepless night over custody and visitation concerns; been forced to reschedule business and social appointments to meet the vagaries of court calendars. And yet, Sue and Stan recently celebrated their 42nd wedding anniversary. It is the breakup of the marriage of their daughter, Pamela, that has turned their lives upside down. (All names of family members in this article have been changed.)

The Howards’ story is a tale of our times. The Census Bureau has not collected data on divorce in America since 1996; still, it doesn’t require a statistician to make the case that a lot of marriages (some put the figure as high as over 40 percent of first marriages) are legally severed. When this happens, the parents of the couple involved in the divorce often find themselves devastated as well. Consider Kate and Phil Bressler’s shock and anguish on the night, a decade ago, when their daughter Liz’s phone call jolted them awake at 2 in the morning. “My marriage is in trouble,” she told her mother, sobbing. Kate was shaken. “Liz and Mark had been married for three years. The business they had started, a small French restaurant, was doing well. More importantly, they had a beautiful, healthy child, Gideon. Phil and I thought that they had a wonderful marriage. What had happened?”

At 5 a.m., Liz called again. “‘Mark’s fucking somebody,’ she told her parents, long pauses separating the words. “It was as if she couldn’t quite believe what she was telling us,” Kate says. “We were nonplussed. You want your children to be happy and they’re not, and you’re powerless. It’s a terrible, terrible feeling.

“That was ten years ago, but in my mind it’s as fresh as yesterday. Everyone loses innocence when there’s a divorce in the family. We become hardened. Even if things eventually work out [Liz is now happily remarried and has a second son], divorce changes us—parent and child.”

When Your Child Is “the Guilty One”

When parents learn that their child’s marriage is coming apart, notes Marsha Temlock, the mother of two divorced children and author of Your Child’s Divorce: What to Expect—What You Can Do “some are angry; some become depressed; others are confused, anxious, or fearful. Some are relieved that their child is escaping a bad situation. Whatever their reaction, parents must be reliable.”

That means loyal, even if, to the parents’ dismay, it is their son or daughter who did the betraying, had the affair, walked out. “Loyalty is a big issue for people who are going through a divorce,” says Temlock. “They want their parents’ undivided support. In divorce, as your adult children see it, neutrality is treason.” But, she quickly points out, “Showing loyalty is not the same as saying, ‘I agree with what you’ve done.’”

How do you support your “guilty” child, but also express your feelings of distress and disapproval? I pose this question to Shelly Goldklank, Ph.D., director of the psychodynamic track at Ferkauf Graduate School of Psychology at Yeshiva University, who specializes in couples and family therapy. “the best thing to do, even if called upon to side, is to first listen to your child and to imagine the two sides of the story,” she says. “Of course you love your child and you want to be supportive, but you also want the child to understand that an affair is a stupid solution to a real problem in the marriage. (Sometimes the affair is meant to be a way to stay in the marriage—it’s what we call a ‘distance regulator’ or a ‘place- holder.’ It keeps the marriage intact, but [the one who strays] is not fully in the marriage.) If your child is the guilty one, I do think he or she needs to learn what that real problem is, what his or her contribution was to that problem, and how to find a better solution. You want to encourage your child to get into therapy—to understand the underlying reason for the betrayal so as not to repeat it in their next relationship.”

For some parents, their shame and sadness over a child’s wrongdoing simply can’t be tamped down and turned into loyal support. Deborah Merrill, a sociologist at Clark University, tells me about a woman she met while doing research for her book, When Your Children Marry: How Marriage Changes Relationships With Sons and Daughters. “Her son had been divorced three times, and the second time he was abusive to his wife,” she says. “His wife actually stayed with the mother-in-law when she left her husband. The mother-in-law could not condone what her son had done, and she and her son did not see each other for a couple of years, until he married again and got back in touch with his parents. But the mother-in-law remains in contact with the second daughter-in-law, whom she loves, and sees the grandchildren from that marriage fairly regularly.”

“When the divorcing family includes children,” says Arthur Kornhaber, psychiatrist and president of the nonprofit Foundation for Grandparenting, “senior family members have two levels of involvement—to try to offer sanctuary for the grandchildren and support for the divorcing parent.” Nice work, if you can get it. But far too many grandparents can’t get it, for animosity leads many custodial parents to deny their ex- in-laws access to their grandchildren.

“There are so many variables that keep grandparents and their grandkids apart,” says Richard Victor, a family-law practitioner in Bloomfield, Michigan, and founder of the Grandparents Rights Organization. He runs through a few: “Grandparents are limited to seeing grandchildren when their own child gets parenting time; a grandparent does not get along with his own son or daughter, but loves the grandkids; since your child’s parenting takes place in a state where your grandchild resides, you have to file a request to see your grandchild and, if that’s denied by the custodial parent, you then have to file an action in the courts. The court is the last place these issues should be resolved,” he says. “They should be solved in mediation or in any place where it’s not acrimonious, because if there’s going to be a confrontation between the parent and the grandparent, it’s the child who loses.”

But even if the custodial spouse doesn’t try to keep the kids from seeing their grandparents, the time-constraints imposed by a joint-custody arrangement can do the same thing. Carla Janson, whose daughter, Lauren, shares joint custody with her ex-husband, laments, “When a mother is with a child all the time, she’s probably thrilled to get rid of the child sometimes and have him visit with the grandparents. But if Lauren has only two weeks a month with her kids, she doesn’t want to give any of that time up to us. And her ex-husband, Hank, certainly won’t let us cut into his time. It might not be a problem if we lived nearby (as Hank’s mother does), but when you live at some distance and want the grandchildren to spend time with you, it’s an issue.”

When you do see your grandchildren, refrain from disparaging either parent. Some years ago, I wrote a book called A Hole in My Heart, about the long-term effects of divorce on its children. I’ll never forget one young woman who said to me, “My mother would say terrible things about my father, and my father would say terrible things about my mother. Since I am a combination of my mother and father, I would often wonder: Which part of me does each one hate?”

Grandparents, too, can cause invisible damage to the same people they’re trying to help if they speak ill of the ex; experts advocate continuing relationships with former in-laws whenever possible. “It is helpful for the grandparents to recognize that an ex son- or daughter-in-law is still the parent of the grandchild and that they would be best served by keeping as positive a relationship with them as possible,” says Adam J. Berner, a lawyer with offices in New York and New Jersey who specializes in matrimonial mediation.

“Unless your child is firmly opposed to it, a good thing to do is invite the former in-law to meals and to holiday festivities,” says Berner, adding, “Grandparents are able to model a more mature, wiser approach of how to deal with a divorcing spouse, recognizing that there still are family bonds, that it’s a transition. When managed wisely, divorce can be seen as a restructuring of a family, not as its destruction.” Kate Bressler has learned that lesson. Ten years after her daughter’s 2 a.m. phone call, she’s able—at least at get-togethers—to suppress her dislike of her son-in-law…because there are birthdays to celebrate; holidays, graduations, and Grandparents’ Day at the children’s schools. “So you’re able to get together with Mark and his family?” I say.

“You just do it,” she answers. “I have nothing against the in-laws. Mark’s mother is a lovely woman. We have a very cordial relationship. What her son did was not her fault. It’s harder to act warmly toward Mark, but when I see him I’m polite. My husband still cannot handle it.”

“Yes, because I have to. Even if you don’t want to, you do it. He’s my grandson’s father. We’ve got a very large family, and there are many gatherings where he’s invited and we’re likely to run into one another, so it’s politeness and ‘How do you do?’ I tell Phil he has to be cordial, but he goes elsewhere. I tell him, ‘If you cannot be civil, you’re hurting the kids.’ I mean, it’s a different thing if somebody is an abuser or something like that…but if you’ve got two people who for whatever reason it just didn’t work out…We know what Mark did, but he’s in our life. What can I say?”

“Liz made a happy second marriage, so it’s easy to be forgiving,” I say.

“We’re not saying we’re forgiving,” replies Kate. “We’re forgetting. Well, we’re not forgetting, either. But we’re making it work for the kids.”

“It’s tougher to stay in the lives of grandchildren when your son or daughter is the non-custodial parent,” says psychiatrist Arthur Kornhaber, M.D., author of The Grandparent Solution, “but you can still say to the ex in-law, ‘You and my child got divorced, but you and I don’t have to get divorced.’”

Continuing relationships with the ex-spouse’s family is in the younger parents’ interest as well, according to Jeanne Hilton, Ph.D., on the faculty of the University of Las Vegas, and Karen Kopera-Frye, Ph.D., at the University of Louisiana at Monroe, who co-conducted a study of the support provided by grandparents to single and married-parent families. [Journal of Divorce & Remarriage]. The researchers found that single custodial mothers were more likely than custodial fathers to distance themselves from former in-laws, depriving themselves and their children of an important source of support. The authors’ conclusion: “Custodial mothers should be encouraged to broaden their definition of the extended family following divorce, and to view former in-laws as a resource rather than a threat.” —C.B.

Claire Berman has written nine books on such topics as caregiving, divorce, step parenting, and adoption. She was a contributing editor at New York magazine and has written for the New York Times magazine, Parade, Reader’s Digest, and other national magazines.

Women in Film: A Foot in the Door