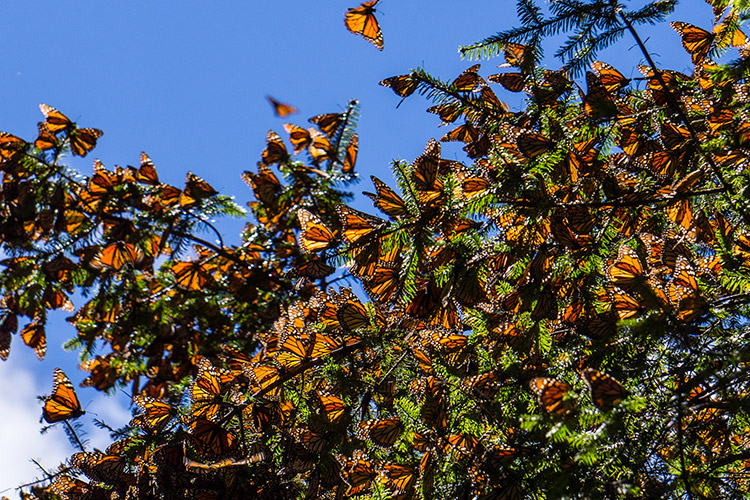 I had magic on the brain: I was expecting to spy Harry Potter, at the very least. Maybe our hotel would resemble Disney’s Magic Castle. I was, to be clear, entering a Pueblo Mágico (Magical Village), the town of Valle de Bravo in the Mexican State of México, one of Mexico’s 100-plus Magical Villages. But, of course, I knew that what was on display here represented a different kind of magic. I was chasing monarch butterflies on a quest to witness a part of their legendary annual migration: Millions of monarchs make a demanding, 2,500-mile odyssey from the Canadian Maritime Provinces and the northern United States to two Mexican states—Michoacán and México.

I was with a small group tour of eight travelers from the US, Canada, and Switzerland (!), led by Marina Aguirre, who runs Marina in Mexico. I knew several people who had taken her trips and all had raved about the educational and exciting experiences she provided. Our trip was nine days, with the first few focused on butterflies, butterflies, butterflies. We visited two sanctuaries, one each in the states of Michoacán and México, where there are five main sanctuaries, each with several sub-colonies and preserves. The Mexican government has allocated close to 140,000 acres of richly forested land as the Monarch Butterfly Biosphere Reserve, which is a UNESCO World Heritage site. (Only certain sanctuaries in the biosphere are open to the public.)

At its height, the monarch butterfly migration population was over a billion, but in the last 20 years, the number has dwindled to under 100 million, something that experts are carefully monitoring, as the decrease is alarming. The butterflies commence their journey in the fall, gliding over the eastern United States and then turning westward, soaring over Texas toward Mexico. They reach their destination in November, and then in March, they take flight to return north.

Monarchs—the only butterfly known to make a two-way migration as birds do—are an enchanted marvel of Mother Nature. Somehow, their route is imprinted in their DNA—researchers are investigating directional aids such as the magnetic pull of the earth and the position of the sun. Monarchs that voyage south are known as “super” monarchs; hatched in the late summer or fall, they fly the entire 2,500-mile distance to Mexico, where they cluster in colonies to stay warm, breed, and lay eggs. Unlike the “super” monarchs, butterflies that migrate north from Mexico do so in successive generations. Sometimes it can take four or even five generations to reach the northern United States and Canada. These new generations know the way and follow the same routes their ancestors took—a truly remarkable phenomenon. 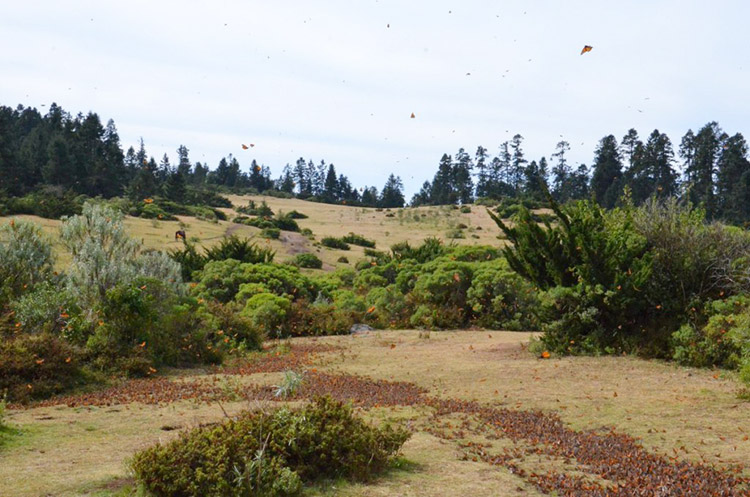 In the El Rosario Sanctuary meadow, thousands of monarchs seek moisture and minerals from the frail stream that cuts a narrow swath across the grassy area. Photo by Frametoframe.ca.
. . . . . . . . . . . .

Marina chose two different biospheres for us to visit (each requiring a full day), the Piedra Herrada Sanctuary (México) and the El Rosario Sanctuary (Michoacán). “Visit” merely describes arriving at the parking lot, after an hourslong drive from Valle de Bravo. After a short walk to the trail that leads to the Piedra Herrada staging area, we climb—an ascent of about 10,000 feet, to the actual home of these itinerant butterflies. The mile hike along the dirt pathways easily takes an hour and there are sharp, switchback turns. Horses led by “gauchos” are available, but they cannot go all the way, so you will still have a trek on foot.

The El Rosario biosphere is the more welcoming of the two, but it is also arguably the most commercial of all of the sanctuaries and is a few hours’ drive—depending on traffic—from our home base. At the entryway are countless well-organized shops, filled with butterfly trinkets, as well as with walking sticks, scarves, shawls, and snacks. The hike up at El Rosario is somewhat easier than the climb at Piedra Herrada, but the altitude may make you slightly out of breath. The reward is the butterflies and they are overwhelming.

Renee Lane, a retired psychologist from Minnesota in our group, was overcome by the splendor and magnificence of the enveloping lepidoptera: “You feel as if you are inside a swirling snow globe.” No matter where we looked, phalanxes of monarchs flew in formations, then landed on the branches of the fir trees. As I looked at one towering oyamel tree, I thought it was dead—then suddenly the foliage took flight: Russet and ginger ribbons of butterflies blanketed the azure sky, in undulating unison. 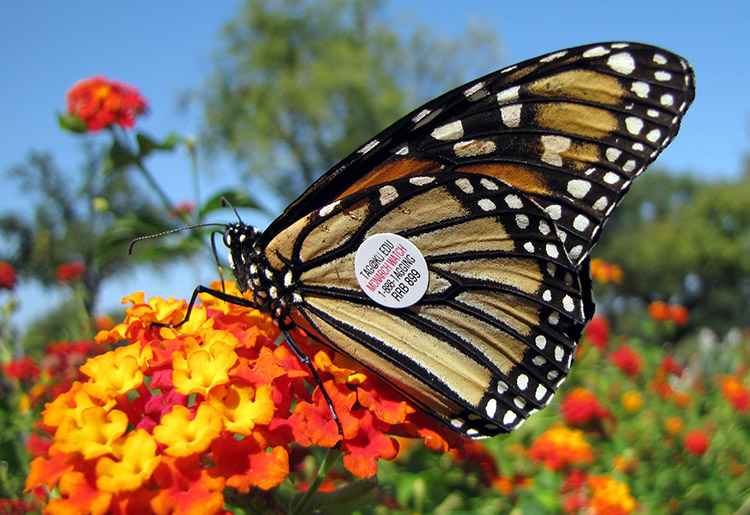 The balance of the trip was also thrilling. First and foremost is the impressive Morelia Cathedral, an imposing Baroque-style structure, the seat of the Roman Catholic archdiocese. We arrived just as a lively, fantastical parade was being staged and le tout Morelia was out Saturday night, enjoying a brilliant fireworks display around the church. It was a celebration of the bull, during Holy Week. Everywhere we went in the following days we found parades and festivals honoring the bull! We also visited the Government Palace, the Sanctuary of Guadalupe, the Clavijero Palace, the Church of Santa Rosa de Lima, the Morelia Aqueduct, and the Regional Museum of Michoacán. Outside Morelia: Several other Pueblos Mágicos–including Pátzcuaro, its lake and the ancient pyramids of Tzintzuntzan; Cuitzeo; and Santa Clara del Cobre, where Marina arranged private visits with copper artists. Lastly, was a visit to the Paricutin Volcano and the village partially covered by its lava flow and ash. 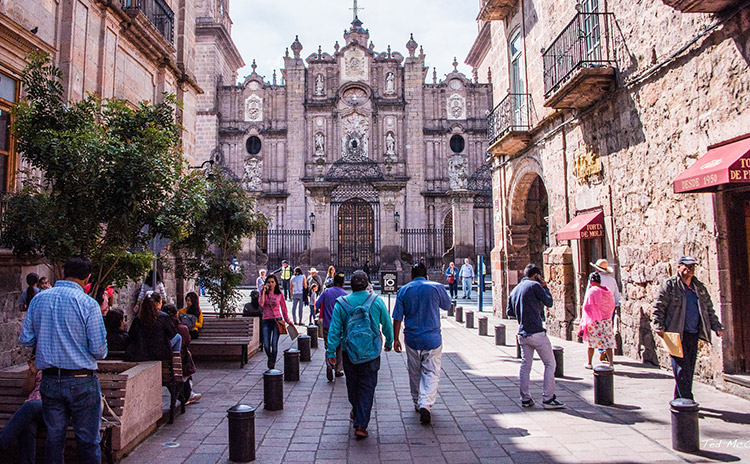 About Marina in Mexico

Marina Aguirre of Marina in Mexico founded her touring company nine years ago, after giving up a successful career in banking. She is a highly educated ethno-historian and archaeologist. Her grandfather, Porfirio Aguirre Dircio, was a renowned archaeologist. She bubbles with knowledge, eager to tell you all she knows about every monument, church, or ruin. People who travel with her tend to return. She offers a half-dozen diverse tours that are usually well subscribed. (Take note: The Puebla and Oaxaca/Day of the Dead trip each fall is usually sold out early in the year.)

“Wherever we went, Marina knew all the locals, even the mayor, and so you share a very welcoming experience, and you also travel to places where you are the only tourists!” So remarked Anne Frej, a seasoned global citizen, who, along with her husband, Bill, has taken several of Marina’s tours. “Because Marina is both an anthropologist and a historian, her commentary is rich and detailed. She puts an enormous amount of effort into her trips, picking out ideally situated hotels, making perfect suggestions for restaurants, and taking the group to interesting artists’ and craftsmen’s workshops.”

The monarch trip is nine days/eight nights and costs $1,550 per person, for double occupancy; and there is a $350 single supplement. The fee includes all hotels, breakfasts, two dinners, a few culinary “experiences,” transportation (including horse rental!) around Mexico, plus all entry fees for museums, attractions, and the biospheres. Airfare is not included.
. . . . . . . . . . . .

Additional reading: The Monarch: Saving Our Most-Loved Butterfly (Kylee Baumlee); Monarchs and Milkweed: A Migrating Butterfly, a Poisonous Plant, and Their Remarkable Story of Coevolution (Anurag Agrawal); and for a novel set against the butterfly migration, Flight Behavior (Barbara Kingslover).

You may enjoy other NYCitywoman stories by Ruth Katz:

Auschwitz. Not long ago. Not far away.