Auschwitz. Not long ago. Not far away.

Landmark exhibit is on view at the Museum of Jewish Heritage—A Living Memorial to the Holocaust. And it couldn’t be more timely. 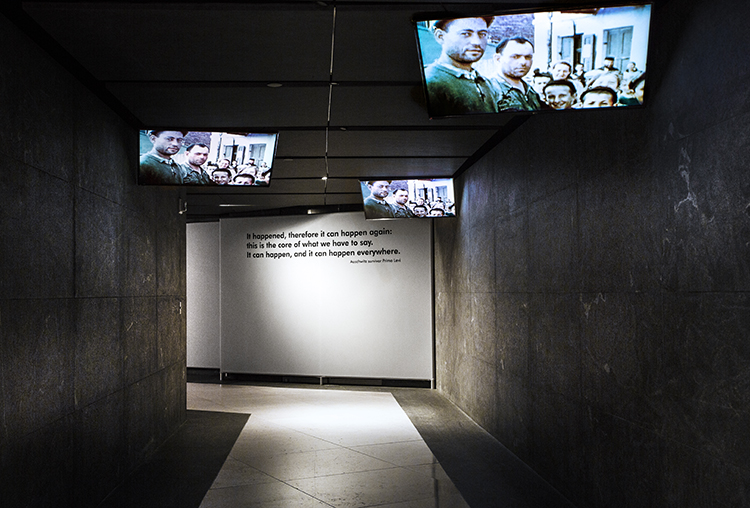 Visitors enter through a hallway showing a video of daily life before the Holocaust. Displayed at the end of the entrance hall is a quote from Auschwitz survivor Primo Levi: “It happened, therefore it can happen again: this is the core of what we have to say. It can happen, and it can happen everywhere.” Photo: Museum of Jewish Heritage/John Halpern
. . . . . . . . . . . .

Twenty-one years ago, in sweltering heat, I trudged across uneven dirt pathways at the remnants of the reviled Birkenau, part of the Auschwitz extermination machine. What we refer to as simply “Auschwitz,” was, in fact, three related locations—Auschwitz itself, where more than a million murders took place; Birkenau, a work camp of slave laborers that also was home to gas chambers and crematoria; and Monowitz (alternatively known as Auschwitz III or the Buna Works), a synthetic-rubber plant, established by the SS to accommodate the IG Farben company, producing synthetic rubber for the war effort.

I had on good walking sneakers, was armed with a giant bottle of water, and had a sun visor. Yet I was miserable, desperate for the trek to end. But as I slogged onward, I thought how fortunate I was that it was not 75 years ago, that I was not a prisoner, instead of the tourist I was at that time. I thought: How would I have endured endless daily marches, in frigid cold, with no warm coat, no woolen socks, with merely a pair of splintering wooden clogs—if I were lucky enough to have anything on my feet besides rags—lacerating my frozen feet, biting at blisters and oozing sores. Not a pretty mental picture.

I vowed then to visit the site where the American heroes who made it possible for me to live a life of freedom are buried—the Omaha and Utah beaches in Normandy and the Normandy American Cemetery and Memorial in Colleville-sur-Mer, France. I fulfilled that promise to myself just a year ago. I found the cemetery indescribably serene, bucolic, transcendent. I cried as I looked at the names and calculated the ages of these young men who fought for liberty…18, 23, 25…all kids. And as I placed flowers on a few graves with crosses and stones on those graves bearing the Star of David, I remembered my visit to Auschwitz, Birkenau, and what was left of Monowitz (just a memorial, really). That was an emotionally treacherous experience. 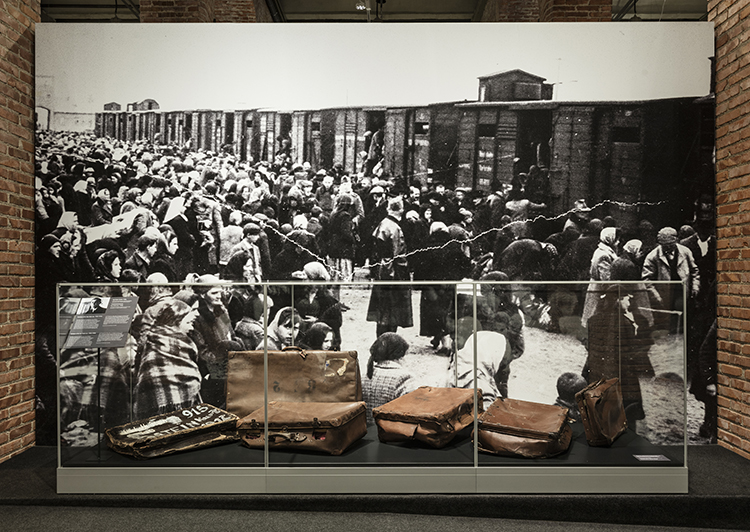 Suitcases confiscated from deportees to Auschwitz; in the background is a photograph of hostages arriving at the camp. Photo: Exhibition installation, Centro de Exposiciones Arte Canal, Madrid, 2017. ©Musealia
. . . . . . . . . . . .

Expect that your visit to the powerful show, Auschwitz. Not long ago. Not far away. currently on view (through January 3, 2020) at the Museum of Jewish Heritage—A Living Memorial to the Holocaust, will be as emotionally searing. How could it not be? Auschwitz was the site where one million Jews, and tens of thousands of others—Polish political prisoners, Sinti and Roma, Soviet prisoners of war, Jehovah’s Witnesses, and those the Nazis deemed inferior, including “homosexual,” “disabled,” “criminal,” or those who were adversarial in countless other ways—were exterminated.

The show is the most comprehensive Holocaust exhibition about Auschwitz ever presented in North America. It was produced in partnership with the international exhibition firm Musealia and the Auschwitz-Birkenau State Museum in Poland. Originally on view in Spain at Madrid’s Arte Canal Exhibition Centre (where it drew record-breaking crowds), the exhibition explores how this human barbarity was able (dare I say, allowed?) to incubate: The presentation is spread over twenty galleries (18,000 square feet) in which the slow fomenting of hatred and the ultimate development of the Final Solution are scrupulously chronicled.

Comments Luis Ferreiro, director of Musealia and of the exhibition project, “Auschwitz did not start with the gas chambers. Hatred does not happen overnight: it builds up slowly among people. It does so with words and thoughts, with small everyday acts, with prejudices.” The show chronicles these subtle occurrences and allows us to understand how this structured annihilation was meticulously choreographed. Ferreiro describes his firm’s mandate, noting, “When we had the vision to create the exhibition, we conceived its narrative as an opportunity to better understand how such a place could come to exist, and as warning of where hatred can take us to.”

The exhibit was curated by an international team of experts, spearheaded by chief curator Dr. Robert Jan van Pelt, the author of the award-winning books Auschwitz, 1270 to the Present (1996) and The Case for Auschwitz (2002). Dr. van Pelt participated as an expert witness in historian Deborah Lipstadt’s renowned case against Holocaust denier David Irving. The show represents the first time since the liberation of the camp that a traveling exhibition dedicated to the historical significance of Auschwitz is being presented to an American audience. Fittingly, the exhibition’s May 8 opening coincided with the anniversary of Victory in Europe Day, 1945, when the Allies celebrated Nazi Germany’s surrender and the end of World War II in Europe. 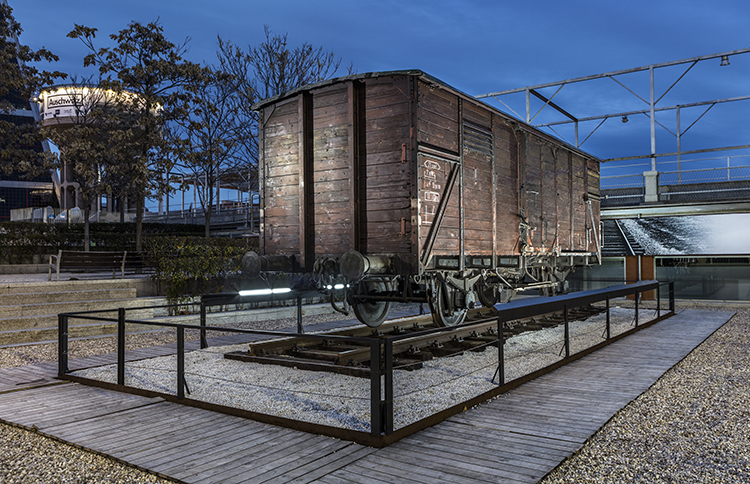 Up to approximately 80 people were crammed in a freight car when they were deported to Auschwitz. Upon their return, the freight cars, emptied of human beings, were filled with their possessions. Photo: Collection of Musealia. ©Musealia
. . . . . . . . . . . .

Featuring more than 700 original objects and 400 photographs, mainly from the Auschwitz-Birkenau State Museum, as well as video testimony from survivors, the exhibit showcases artifacts from more than 20 international museums and institutions, including hundreds of personal items, among which are clothing, books, trinkets, suitcases, eyeglasses, and shoes. For me, having viewed mountains of these goods—the lares and penates of daily life—in glass vitrines at Auschwitz itself, I found these symbolic personal possessions simply heartbreaking to look at. Here, one small exhibit case holds fewer than ten suitcases, including two simple wicker baskets and one beaten-up leather valise bearing the name, if I read it correctly, “Dr. Stein.” It will readily bring you to tears, as you ponder the upheaval and mayhem brought to Dr. Stein’s life…and likely, ultimate death.

Other powerfully evocative artifacts include concrete posts, once part of the fence of the Auschwitz camp; a section of an original barracks for prisoners from the Auschwitz III-Monowitz camp; a desk and other possessions of the first and the longest-serving Auschwitz commandant, Rudolf Höss; a gas mask used by the SS. Setting the tone of the exhibit, outside the Museum, there is an original German-made Model 2 freight train car, the type used for the deportation of Jews to the ghettos and extermination camps in occupied Poland, an unnerving symbol as to what awaits the viewer inside.

The sight of that boxcar as you arrive at the Museum engenders a disquieting, startling reaction. But, that vision is bookended by another vista, this one uplifting, and a stark counterpoint to the first: In the inner reaches of the Museum, just outside the haimish, second-floor bistro, LOX at Café Bergson, is a welcoming terrace. It offers a picturesque view of the city’s harbor, framed in verdant foliage. Central in this seascape is the majestic Statue of Liberty. It is subtly appropriate that our celebrated symbol of welcome is visible here, just as she was a beacon to the hundreds of thousands of immigrants who braved transatlantic crossings to come to these shores; Lady Liberty was, assuredly, an uplifting symbol of freedom and hope. And that panorama provides hopeful assurance, a sharp contrast to the unsettling feelings one experiences when processing the disturbing implications of what that freight car outside the building augurs.

Much of what is on display comes from the Auschwitz-Birkenau State Museum and the Museum of Jewish Heritage; other participating institutions include Yad Vashem in Jerusalem, the Anne Frank House in Amsterdam, the United States Holocaust Memorial Museum in Washington, the Auschwitz Jewish Center in Oswiecim, the Memorial and Museum Sachsenhausen in Oranienburg, and the Wiener Library for the Study of the Holocaust and Genocide in London.

“Seventy-three years ago, after the world saw the haunting pictures from Auschwitz, no one in their right mind wanted to be associated with Nazis. But today, 73 years and three generations later, people have forgotten, or they never knew,” observed Ronald Lauder, the founder and chairman of the Auschwitz-Birkenau Foundation Committee and president of the World Jewish Congress. “This exhibit reminds them, in the starkest ways, where anti-Semitism can ultimately lead and the world should never go there again. The title of this exhibit is so appropriate because this was not so long ago, and not so far away.”

Further reading: You may want to read Survival in the Shadows: Seven Jews Hidden in Hitler’s Berlin, by NYCitywoman’s founding editor, Barbara Lovenheim. The story is a compelling read, chronicling the ordeal of seven Jews hidden in Berlin for two years during the war.

You may enjoy other NYCitywoman stories by Ruth Katz: