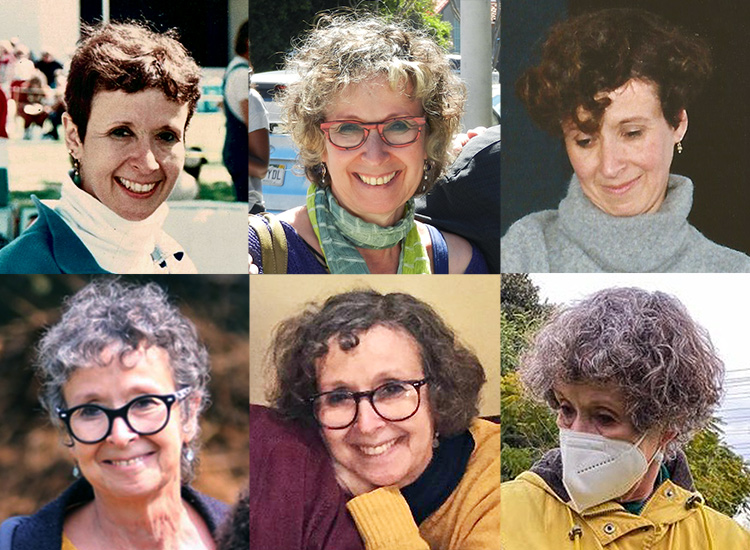 I’ve heard it said that a woman really only needs two things—a good gynecologist and somebody skilled to cut her hair. I love my gynecologist. Having curly hair compounds the problem of the latter.

Few people are happy with their hair. If it’s straight, they want curly; if it’s curly, they want straight. I’ve always struggled with my curls and—for many years—East Coast frizz. During high school, I ironed my hair (ironing board not flatiron), as was the fashion in the ’60s. Even though I went to a largely liberal, largely Jewish prep school (Fieldston), straight hair back then was the transitional look—from preppie plaid pleated skirts and jumpers to granny dresses and going bra-less. Straight, well-behaved hair was also a not-so-subtle WASPy expression of racial prejudice and antisemitism, even if I didn’t recognize it at the time.

In college, now Berkeley hippie chick me had long brown waves flowing halfway down my back, until one day fashion became slicker and more demanding. I don’t remember which year I cut my hair, but on one trip home to see my parents, I went to the New York Vidal Sassoon salon, then in the Sixties on Madison Avenue, and had most of it cut off. My waves and curls weren’t very co-operative.

During college, especially at that moment in time, hair wasn’t very important. My Brillo-curly boyfriend loved me no matter where my hair landed—framing my face, at my shoulders, or down my back. But nothing lasts forever. Vanity sets in. Right after college, when I moved to Los Angeles for a REAL job, albeit in the entertainment business, I thought that I should look presentable—even though I was working in production.

Sassoon’s was still the Gold Standard, so again I made an appointment, this time at the Beverly Hills salon. The haircut, undoubtedly some tortured bob or other that attempted to wrangle my curls, went well enough until it was time to get dressed and pay the bill. The top that I’d worn was nowhere to be found. By way of apology, I was offered a free haircut in trade for the pilfered top. I tipped the appropriate people, left the salon in a Sassoon smock, bought an inexpensive T-shirt nearby, and never went back. It had all been TOO much!

I have forever been in search of the elusive perfect curly hair stylist. Sometimes there’d be one or maybe two or even three good cuts, but then things would sour. They’d be variations on a bob, some longer, some shorter. Some wedgy or asymmetrical, then things would go awry. I’d get referrals from friends. I’d stop curly-haired women on the street if their cut was flattering and I’d ask for the name of their stylist. My hair was often quite short, because my curls behaved better when they weren’t yet curls, when they didn’t have length enough to rebel.

My parents’ 50th wedding anniversary party was coming up—a BIG, important-to-my-mother event. That event fell in my stylist search cycle at “a time to try someone new.” The latest foray was god-awful! My L.A. cousin (curly) and his wife (wavy Italian) both went to someone whom they REALLY liked—Christopher Robin. Christopher turned the disaster into asymmetrical style. I was presentable.

He had been among the first crop of Sassoon stylists in London. No matter where he migrated, by his station was the classic framed multiple-image poster autographed by Vidal. Almost in spite of his Sassoon training, he understood curly hair. Christopher was an instructor at the local Sassoon Academy, grasped curly idiosyncrasies, and was able to teach those cutting principles. It wasn’t always perfect, but it was stylish, and he was courageous with color and cut. During grad school, at the Southern California Institute of Architecture/SCI-ARC, there were burgundy cellophanes that faded to shades of pink, as well as other curiosities.

And then one day, after years of reliability, Christopher was gone—back to England. The quest resumed. 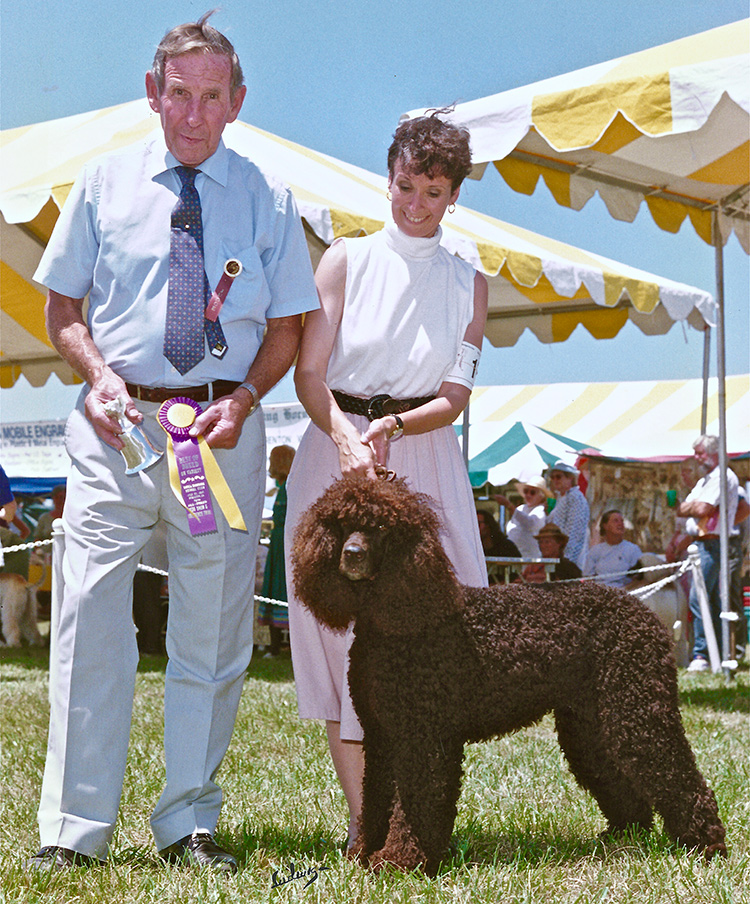 Somewhere in the passage of time, I became involved with breeding and showing purebred Irish Water Spaniels, whose curly puce-liver, a/k/a brown, ringlets are not dissimilar to mine. I groom my dogs myself, so I’m used to taking a pair of scissors and whacking off this or that errant curl. That has emboldened me with my own hair to trim a less-than-satisfactory haircut to suit.

Over the years, in service of combatting frizz, I’ve learned to avoid drying my hair with terrycloth towels. Microfiber, an old cotton T-shirt, or even brown paper towels are preferable. There are 75 pages of curly hair and curly hair education books on Amazon—some for children, some for adults, some for Black people, some for not Black people, some analyzing it all in minute detail. Is the curl pattern wavy, curly, or coil-y? What is the porosity, density, and width of each strand? What is your overall curl type? Do you use product-infused combs, special diffusers, or other curly tools? Do you “plop” your hair? Plop refers to gathering and covering all your waves/coils on top of your head and wrapping them, to keep the curl pattern in place while the hair dries, i.e., setting your hair without setting it.

While largely housebound during Covid, I decided to let my curls grow out and have free rein. I discovered the breadth of the Curly Hair Universe—websites, social media chat groups, and endless places in the ether where I could share my frustrations and receive advice from the Group Mind, sorting through the limitless array of curly hair products. I learned that there are at least three different schools of cutting curly hair: Deva (dry cut, focus on angle-cut individual curls), Ouidad (wet cut, carve-and-slice style), and Rezo (dry cut but even length overall). And still I searched, within Covid’s constraints.

Recently I needed a haircut and wanted to treat myself. I’d been relatively pleased with the stylist who’d been cutting my hair, but her salon is a distance from me. I was hoping for someone a little closer, so I resumed my quest … again. After checking websites such as naturallycurly.com, after reading Yelp reviews and joining Facebook groups such as Curly Girl for Wavies, Curly Girl (Method) Support Group International, Curly Tips for FINE Hair, and the Curly Girl Method-Wavy Club, I narrowed it down and made an appointment. I followed the instructions on the website regarding what not to do. 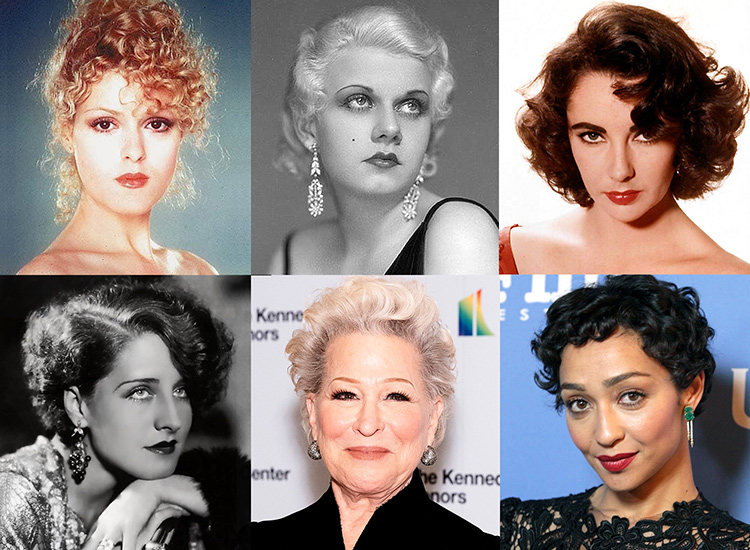 I brought a sheet with seven inspirational photos, including those of Jean Harlow, Norma Shearer, Jean Arthur, and Ruth Negga. All were soft, very feminine, and suited for hair like mine. The stylist zeroes in on the Ruth Negga photo and two other very short contemporary styles, but she wistfully bemoans the femininity of bygone days’ styles.

She cuts and cuts and cuts my chin-length hair. Curly hair’s growth pattern is typically not symmetrical—at least mine is not. That’s why a “curly hair specialist” is theoretically a good idea. There are cowlicks and ridges and inconsistent growth, all complicated by my wiry salt and pepper hair. (In fact, according to a friend’s Brooklyn hairstylist, Nathalie Kalae, “the curl pattern can vary throughout the hair—so growth is inconsistent.”) As per information on the website, this L.A. stylist has been cutting my hair dry—without any product.

I’m not afraid of short hair. Mine has been VERY short at times, but I do want it to be feminine.

Now it’s getting REALLY short. I suggest that the stylist spray it down a bit to see what my hair will do. I explain that my left side is my well-behaved side and my right side is less co-operative. She continues pulling out hair on both sides for symmetry. I say that an asymmetrical cut would be fine.

Finally, there isn’t much hair left on my head. She stops. She’s visibly not pleased but seems to have reached a place of comfort. I just want to leave.

As has also been said, a bad haircut is like an ugly dress that you have to wear every day. Well, I’ve now washed and snipped at my hair enough so that it’s satisfactory. I know that inevitably it will become awkward again. Hair grows. I’m thinking of adding rose gold streaks to make it more mine—I hope. The quest will continue once there’s something long enough to cut … again.