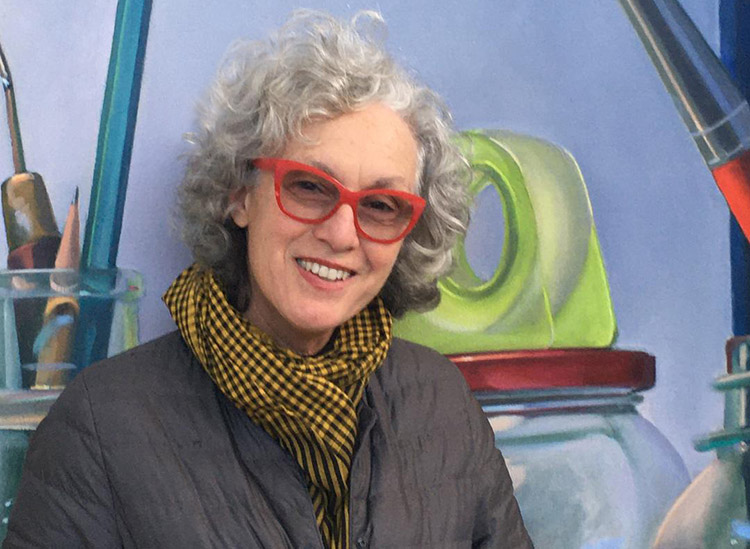 So insisted an unusually animated Roberto, my hairdresser, as I made excuses for not having home-tinted my hair to its original chestnut shade before coming to him for a cut. Shaking his head, he muttered “No, no, no, you don’t understand anything!”

The grey roots could not have been more than an eighth of an inch long. But for Roberto, that was evidence enough for him to see the emerging beautiful color that would be set off by my fair complexion and positively transform my appearance. In his view, there was no question but that I should shift to grey and begin at that very moment.

Roberto Di Silvestre and his salon happen to be in Rome (on Corso Vittorio Emanuele II, should you be interested)—a two-and-a-half-hour drive from Buonconvento, the town in Tuscany where my husband and I—we’re both actively working artists—spend a good part of each year, and where we last returned shortly after New York’s Covid lockdown ended last summer.

My relationship with Roberto began in the late 1980’s, when I was working in Rome for the United Nations. Then in 1995 I did a complete career switch, became a full-time painter, and my American husband and I began teaching landscape painting workshops in Tuscany. Every year since then, we have divided our lives between New York and Italy, and all the while Roberto has continued being my hairdresser of choice.

Coming from anyone else, I would have rejected the suggestion outright, but Roberto had nothing whatsoever to gain from giving me his strongly worded opinion. At the time, seven years ago, over 90 percent of women and a significant portion of men in Italy colored their grey hair. A long-term relationship with a skilled colorist would provide a reliable and steady source of income. Roberto’s decision to forego the opportunity to make money off my personal vanity hit a deep chord.

I had been contemplating the transition to grey for some years already. Having somehow managed to get through life with my youthful idealism intact, living according to principles was important to me. Truth, transparency, reverence for nature and its processes were among the values that I felt defined me. Increasingly, I came to view haircolor to be in conflict with these ideas. I saw myself as projecting a lie in a vain attempt to preserve my youth, and was uncomfortable about adding more chemicals to the toxic environment in which we live.

More practically, I saw hair tinting as a form of slavery that only worsens with age, as the angst linked to decline grows. There was also the aesthetic consideration. I could not help but notice that for every woman who had a good colorist, dozens more did not. Whether they did it themselves, like me, or used a professional with limited skills, the results looked fake, jarring, and often ridiculous.

I had lived far too long as a protagonist and wanted to avoid dependency on a process that ultimately I could not control. (And as for the notion of a pandemic closing down hair salons for months, denying the possibility of color maintenance? That was inconceivable at the time!) On the rare occasions in my youth when I projected myself into the future, I envisioned aging naturally with grace and dignity. The idea was always lurking in the background as I moved through life.

With Roberto, that urge suddenly surged forth. The moment to embrace the truth and transition to my natural state had arrived. I told him to go ahead and give me a short cut—something I’d let him do only once before, years earlier, when I got married. As it had then, the cut signaled the beginning of a new adventure. 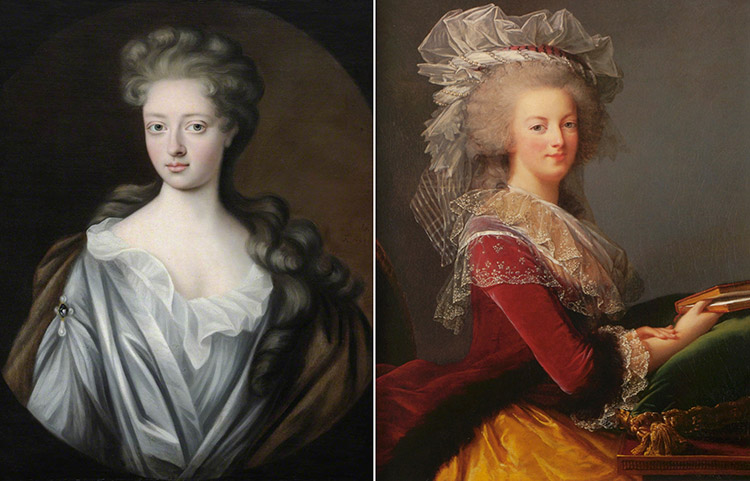 Concepts of beauty are time-bound and variable, shifting according to the fashions of any day. Grey hair did not always have the stigma of age and decline. In 18th century Europe, the upper classes of all ages went through extremes with powdered hair and wigs to conform to an ideal of beauty that prized the look of silver and grey pastels. Reflecting on this basically arbitrary condition, it seemed clear to me that our perceptions of grey could change again. I came to see my transition to grey not just as a personal journey, but as part of a larger mission to influence a cultural aesthetic.

That I reached the decision to go grey does not suggest that it was not a complicated, fraught process. But there were several conditions that facilitated my choice. First was that I was happily married and my husband actively encouraged me to make the change. The support was there, and I cannot pretend that was unimportant. Second, I was, and remain, self-employed and unlikely to seek work again in any institutional setting. So there was no chance of being a victim of ageism, which can be a genuine concern. Finally, I lived between two countries, so could disappear for at least six months at a time. This helped me get through the most awkward stages of the process on each side.

The transition was not fast, taking approximately 18 months to complete. I refer to that time as my “coyote” phase, reflecting the wild palette of clashing colors growing side by side on my head. The experience was not without its uncomfortable and even painful moments.

The nadir came at the eight-month mark when, back in the U.S. in early 2014, I met a close friend at the Fort Lauderdale airport for a planned trip to the Florida Keys. We had not seen each for a year, and I had not mentioned anything about going grey. We had known each other since high school and had taken trips together frequently in the 30-plus years following graduation. What would have been a warm reunion in a pre-Covid world of unrestrained physical contact instantly took on the chill of social distancing.

The moment she laid eyes on me, the first words that issued from her expressionless face were, “You HAVE to color your hair!” No smile, no greeting, nothing. I was unprepared for this reaction and felt completely crushed and deflated. If I could have magically disappeared in that moment, I would have. But I somehow recovered both my resolve to persevere and my enthusiasm for our upcoming adventure. The tension dissipated after I explained myself, and we proceeded to have a wonderful trip. (In hindsight, I realize that it would have been a good idea to share what I was planning before we physically met.) 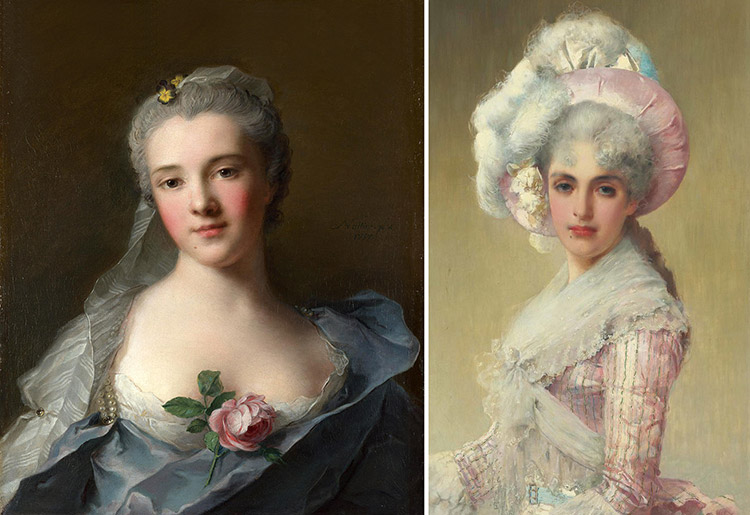 Over time, I became skilled in disguising the unattractive appearance of my multi-colored hair through clever styling and hat-wearing. The final and easiest months of the passage occurred during one of our summers in Italy, when I was outside most of the time, painting with a hat on for sun protection. Our social contacts were not extensive in our small village, so I could live without being closely observed.

By the time we readied ourselves to return to New York, the change was complete. While I felt positive about the result, I was never a good judge of my own appearance, (a strange paradox for a visual artist), and could not be confident. I did not fully trust my husband either, as he, like one’s mother, could never be truly objective. The real test would be the reaction of others once we were back on home turf. There I would discover if Roberto’s aesthetic vision of me had wider resonance.

Within days of returning to our home on the Lower East Side, I was back at the gym. Both my yoga and spin instructors made a special point of weighing in on my new look. “You look gorgeous!” and “I love your hair!”—those were their respective comments. One afternoon while walking down the street, a parking attendant called out to me, “Hey, you’re looking really good”. I did not know this person and was somewhat embarrassed by the unsolicited comment. It was inconceivable to me that anyone with grey hair could attract attention. I timidly smiled in recognition of my new visibility. One of the most memorable episodes occurred in a Massachusetts Walmart, when a staffer followed me through the aisles and, excusing herself, said, “I just wanted to tell you that I LOVE your hair!” Nothing like that had ever happened to me before.

The reactions from friends and family were unanimously positive and enthusiastic. Many were puzzled by the perception of seeing me more as a variation of blonde than silver grey, an optical trick played by my skin tone. It was this interaction of haircolor and complexion that Roberto recognized could transform my appearance.

Today, seven years after going grey, my curly hair is thick and healthy. Gone is the dryness that characterized it during the many years of coloring, in my efforts to retain my original chestnut tone. Encouraged by my results, one friend also took the plunge and let herself transition—with a stunningly beautiful outcome. We both cannot imagine looking any other way.

Occasionally I am fascinated, even obsessed, by the beauty and diversity of tones in young hair. It seems unreal to me. Equally unreal is the memory of being anything other than a pewter version of my former self. Rich natural color and shine in hair are the province of youth, now to me inaccessible. In rare moments I view this reality with sadness and longing, but most of the time I am just fine to be where I am.

Moving forward through life, I find myself fantasizing about becoming invisible, acting as I please, immune to scrutiny and prejudice. Maybe this is just another sign of aging and is a widespread occurrence. I don’t know. I do know though that I am not invisible and that my image, mirrored in the responses of others, is susceptible to external influence. From this perspective, the experience of going grey was empowering. The universally favorable reception I enjoyed reinforced my confidence and was energizing.

It might have gone the other way though. A critical verdict could have been diminishing. I knew this was a possible outcome when I opted for the change. It was a risk, but one, as a person with a higher than average risk appetite, I was prepared to take.

But there was also that sneaking suspicion guiding me along that Roberto was right!