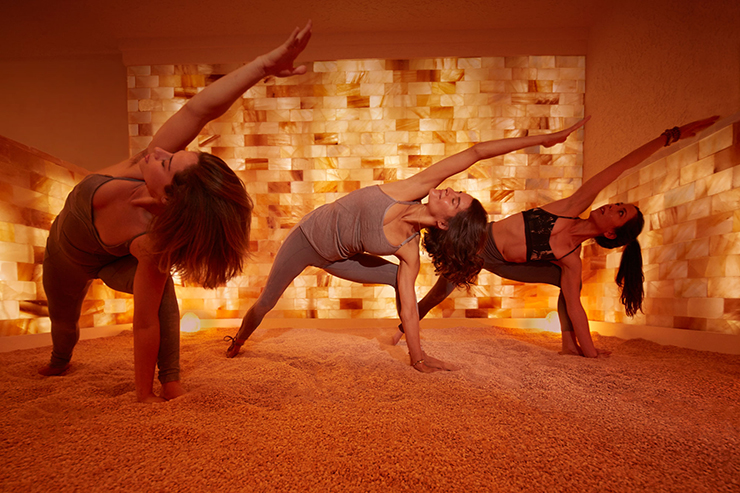 Updated Dec. 7, 2022
When I heard about the alleged benefits of relaxing for a half hour in a salt room I was skeptical, but intrigued. I then read as much as I could about it and learned quickly that salt therapy—also known as halotherapy (halo is Greek for salt)—has been studied extensively in other areas of the world. Its roots, in fact, go back to the 11th or 12th centuries when people visited Eastern Europe’s natural salt caves to heal their ailments. Fast forward to the 1830’s, when Dr. Feliks Boczkowski, a Polish physician, noticed that workers at the Wieliczka Salt Mine did not suffer from the respiratory conditions common at the time; instead workers were in good health despite their arduous work. Boczkowski soon published a book about his findings. A few years later one of his students opened the first salt clinic near Krakow, Poland.

But today there’s no need to go abroad to enjoy the benefits of salt. In recent years, dedicated Himalayan salt rooms—built to mimic the natural conditions found in caves in Eastern Europe—have been popping up throughout the U.S. There are now several in Manhattan and surrounding areas. Even the restauranteur David Burke has a semi-private dining space in a corner of his Upper East Side Tavern that is enclosed by brick walls made of pink Himalayan sea salt. The area is back-lit, which makes the salt walls glow. Pharmacist David Restrepo, owner of Vitahealth Apothecary, dines there two or three times a month and says being surrounded by salt gives him “a general feeling of well-being.” 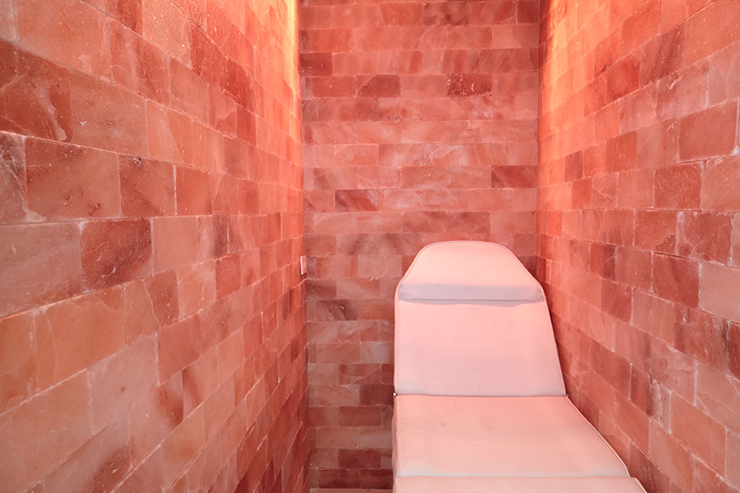 Salt is considered beneficial because it has antibacterial, anti-inflammatory and anti-fungal properties and is purported to confer a variety of health benefits. These include relief of respiratory ailments such as asthma, bronchitis, sinusitis and colds, as well as skin conditions such as eczema and psoriasis. Adherents claim it also can boost your immune system and help relieve stress.

While there isn’t much empirical research to support the myriad benefits that salt proponents claim, a small study in the May 2017 issue of Pediatric Pulmonology found that children diagnosed with mild asthma experienced “some beneficial effects” after two salt therapy sessions a week for seven weeks. Another small 2014 study published in the Journal of Medicine and Life found that when patients with bronchial asthma and other chronic bronchial conditions underwent halotherapy, the salt triggered an anti-inflammatory mechanism and stimulation of a process in which cells called phagocytes engulf bacterial or viral particles to destroy them. Even as far back as 2006, a study published in the New England Journal of Medicine found that inhaling salt-infused vapor improved breathing for 24 patients with cystic fibrosis. But clearly more research is needed.

Pharmacist Restrepo is convinced that in today’s world salt is an important healing tool, particularly in polluted New York City. “There are environmental toxicants and disruptors in the air every day, things like lead, asbestos and even negative effects from electro-magnetic fields,” he says. “On the other hand, we have gentle cleansers that exist—like Himalayan salt blocks. So there’s a definite reason to incorporate healthier substances in our environments.” 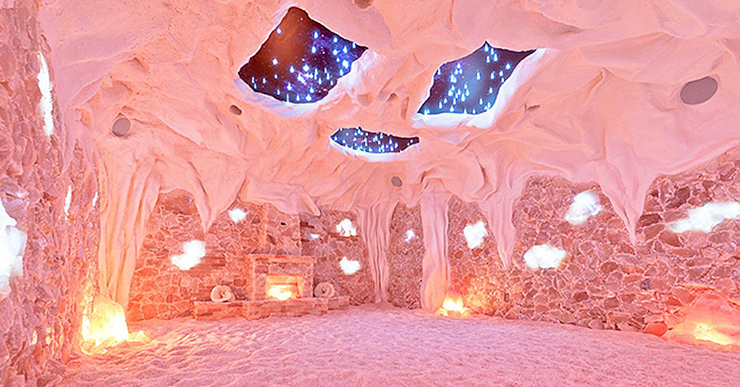 (Closed) Since this is the time of year when colds and flu are the bane of even the healthiest and wealthiest individuals, I booked a 25-minute appointment at Breathe Salt Room, a dry salt therapy treatment center that has two locations in Manhattan and two in Westchester. Founded by Gary and Ellen Patrick (he’s the global advertising director at Sketchers; she’s a certified yoga therapist), the 7th Avenue Breathe salt room was definitely no-frills, with no locker to store my jacket or bag. However, the staffer at the front desk did an excellent job of explaining the treatment and what to expect.

I parked my shoes in a hall closet, covered my feet with disposable booties, and was taken into a darkened room with several inches of salt on the floor and walls made of rock-salt bricks. No one else was there so I had my pick of four comfortable, reclining chairs (visitors to Breathe Salt Room’s Park Avenue location sit on beach chairs) in which I could sit and breathe micro particles of salt pumped into the room via a halogenerator, a machine that precisely grinds salt into very tiny breathable particles and disperses the atomized salt into the air. It was restful, but when the session ended I found I had a dusting of salt on my jacket, black bag and the rest of my business clothes. What had been a stress-less few minutes in the salt room became stress-filled as I worked to clean off the salt. 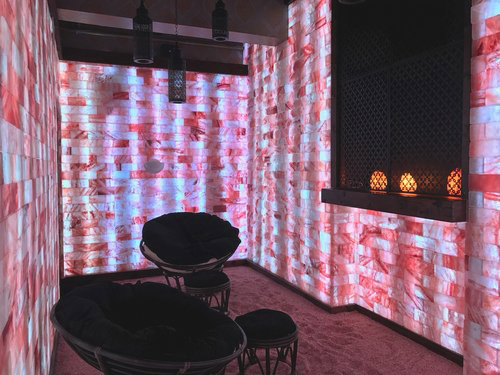 (Closed) About a week later I decided to visit Modrn Sanctuary, at left, a 5,000-square foot space founded and owned by Alexandra Janelli, a certified hypnotherapist and life coach. Located in the NoMad section of Manhattan, Modrn Sanctuary melds Eastern and Western philosophies and offers a variety of traditional and alternative workshops, classes and holistic services including hypnosis, acupuncture, crystal therapy, past-life regression and body work.

The 200-square foot salt room is constructed with nearly 11,000 tons of salt that line its rough and smooth salt brick walls. The ceilings are nearly 12-feet high and the heated floor is covered with ground Himalayan salt. In fact, right before I entered the room, I was told to shed my socks so I could directly absorb healthful negative ions from the dense pink salt on the floor, where a halo generator pumped undetectable micro-particles into the room.

Once again, I had a salt room to myself. I sat down in one of the black nest chairs, listened to soothing sounds—and fell asleep! Although the salt room isn’t designed to be a glorified nap room, I enjoyed the break. And afterwards? I didn’t notice a major change in my overall health, but I was still relaxed from my experience in the salt room. That night I fell asleep right away and didn’t wake up until daybreak. The following day I learned that treatments need to be repeated to have an impact on you. So, as the temperature now falls lower and lower, the idea of another salt session is beginning to seem more than a little appealing to me.
. . . . . . . . . . . .

Interested in salt therapy? Check out these places in Manhattan, Westchester and Long Island:

You may enjoy other NYCitywoman stories by Rona Cherry

Foods that Hurt, or Help, If You’re Feeling Anxious

Memo to Trump: Naps Are Good For You!

Is Your Chair Killing You?