Pickleball is the fastest growing sport in the U.S. and popular with seniors, offering a good workout year round with low-impact on joints. 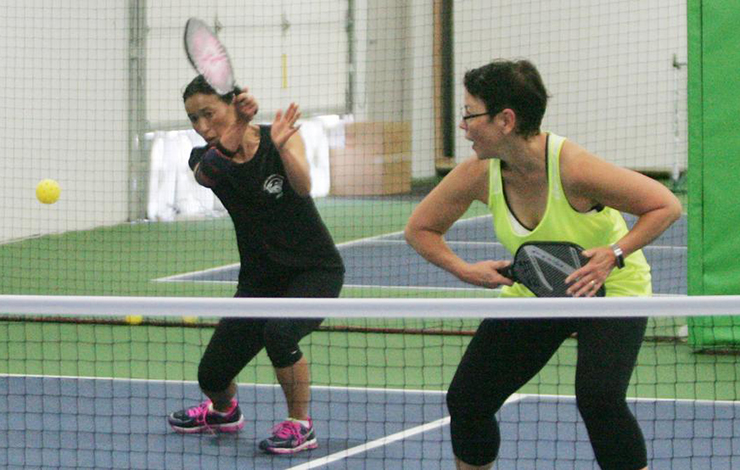 The Caseys, a senior couple from Rochester, NY, tried the game this summer. Like many others, including this writer, they learned while on vacation and now play at home. The game is a mix of tennis, ping pong and badminton. The racquet is the size of a ping pong racquet but has a longer handle; the ball is whiffle-like and the court is about half the size of a tennis court or a doubles badminton court.

In the mid-sixties Congressman Joel Pritchard—who named the game after his dog, Pickles—and pals created the game in Washington State by piecing together old sports equipment to entertain their kids. Today, 2.5 million people in the US play and 75% of the core players are age 55 plus, according to the 27,000 member association, USA Pickleball (USAPA).

The sport has a language of its own. If your partner yells, get out of the “kitchen,” she’s referring to the no-volley zone adjacent to the net (not where food is cooked) to prevent players from slamming the ball. Watch those backhand “dinks.” You can get pickleball elbow.

Kara McKinney, 55, is passionate about the sport. “I gave up tennis for pickleball for the social aspect of it,” says Kara, a certified pickleball instructor who conducts clinics on Long Island, “But it’s hard to play both.” While there are a lot of long strokes in tennis, in pickleball you hit the ball in front of you. The strategy is different. In tennis you try to finish a point. In pickleball you wait for your opponents to make the shot you can put away.” In addition, you serve the pickleball underhanded and unlike tennis, you can only score points when serving.

New Yorker Michelle Foster, 68, who winters in Florida, plays daily and she is building a house with a pickleball court. “It keeps me fit and healthy,” she says. “You don’t wear yourself out like in tennis. And it’s easy to learn at a basic level. There’s a lot of joy and laughter associated with the game. Foster explains that like many tennis players she struggled at first because in the zone by the net you play a soft game. “You have to get out of your comfort zone and override muscle memory,” she explains.

Three years ago, Linda Cappello, 60, who was a dedicated runner in the city, took up pickleball at the Y in East Hampton.  She’s now a pickleball ambassador in East Hampton and a gold medalist from the US Open pickleball championship. “It brings together a diverse community who are like minded in their passions,” says Cappello.  “It’s a way to make close social connections. At this age we have more time for that.” She sees many women playing into their eighties and hopes to be one of them. “As mobility becomes more limited you want to play with your age group.”

“Anyone can do it once you know the rules,” says Cappello, who prefers to play outdoors. “It’s a little more challenging with the variations in wind and sun on the court.”

New York City, however, is lagging behind the rest of the country when it comes to dedicated pickleball courts. Players who learned the sport on vacation find they must go to Hoboken, Livingston and other New Jersey spots, Fairfield, Nassau or Suffolk counties to pick up games or find courts. Part of the shortage of courts in the city is the high price of real estate although around the country, many resorts are converting existing tennis courts to pickleball courts to accommodate the popular growing sport. Kara McKinney thinks the shortage of courts in the city is “about spreading the passion” for pickleball. In many cities, pickleball has begun as a court-sharing sport.

William Hanft, who plays both tennis and pickleball in the city, says, “There is a need to grow awareness that will force “the city” to create courts be they shared courts with basketball and tennis or eventually dedicated courts. One enthusiast even travels from Brooklyn to Hoboken for a regular 6 am game.

Courts have opened up since publication, so check these resources: The 2022 NYC Pickleball Guide for a very up-to-date listing of pickleball courts. And if you love to cross-reference as much as we do, check Pickleheads.com. There’s a good map, photos of the courts, plus lots of useful pickleball information.

. . . . . . . . . . . .
Karen Feld is an award-winning writer who wrote a syndicated column on the Washington-Hollywood connection for many years. She launched The Buzz column in The Washington Examiner and was Washington editor of the Delta Airlines in-flight magazine, and #FlyWashington Magazine.

Other articles you may enjoy: