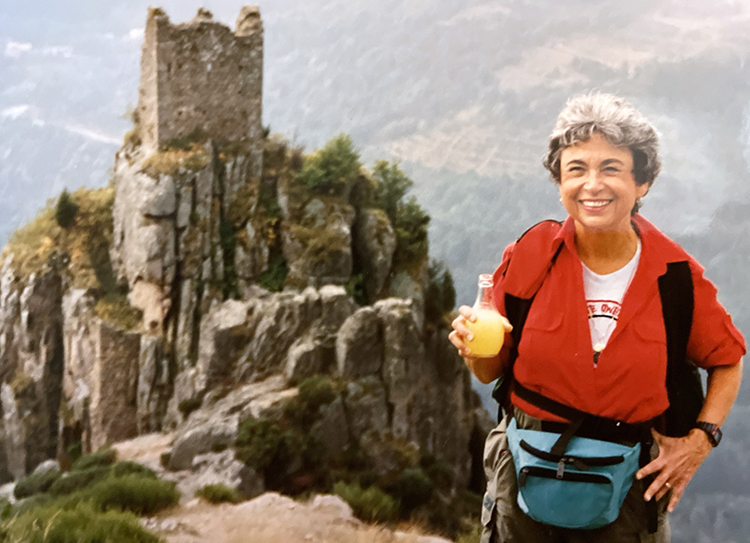 I’m a writer on the Upper West Side, with 11 books and hundreds of articles behind me. My subjects over the years have been relationships, health, and personal growth. In other words, I’m the least likely person, or so you’d think, to even think about going mountain climbing in a remote Asian country. But that’s exactly what happened.

One morning in 1987, over coffee, my husband of 30-plus years, David, who was a program director and general manager of various radio stations, announced, “Let’s go trekking in Nepal!” He’d heard about a two-week group tour starting in Kathmandu, the capital city, and it held a romantic pull for him.

I was aghast. I hadn’t even gone hiking since I was a Girl Scout—and that was 40 years earlier. But always wanting to push myself past my comfort zone, I said yes.

So David and I soon found ourselves in this sliver of a South Asian country. I was 53 years old at the time. It changed my life.

Though I’d had zero ambition ever to climb mountains, I was happy enough to traverse the lower trails, practically none of them level, going up and down in the shadow of Annapurna, a challenging mountain in north-central Nepal.

And soon enough, my involvement with this Himalayan world deepened.

David had had enough of Nepal after two visits, but I returned a total of seven times. I fell in love with the Nepalese people—so kind and appealing. Walking along trails, the customary greeting to perfect strangers was “Namaste”—I bless the god within you. 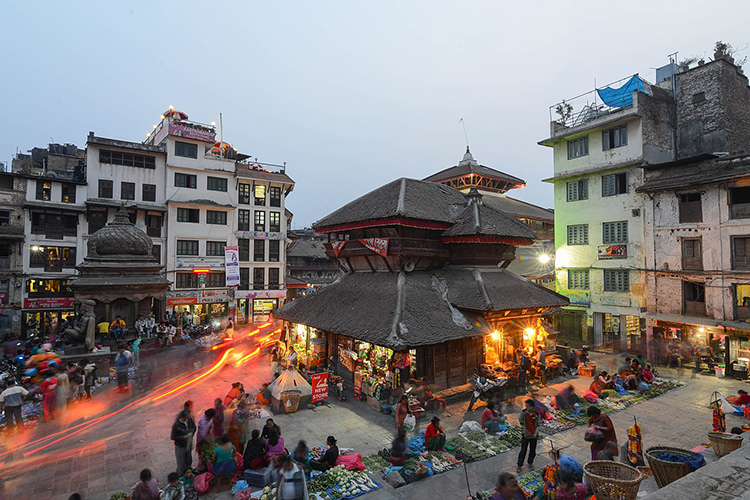 Durbar Square, in front of the royal palace of the former Kathmandu Kingdom—an important spot for Buddhist and Hindu rituals, and a UNESCO World Heritage Site.
. . . . . . . . . . . . .

Nepal is not a paradise. One of the poorest countries in the world, it’s landlocked between two giants—China and India, with no natural boundaries—and although it’s never been taken over by another country, it’s managed instead to create its own problems, in the form of internal political disputes that have occasionally erupted into civil war, as I experienced during one of my stays there.

Just before the first of my solo trips, I met the artist Margaret Roche, from Evanston, Ill., who became my trekking partner and good friend. She too had fallen in love with Nepal, but she had me beat. Marge had visited the Himalayas 12 times!

She and I stayed with local families in Badel, a tiny, mountainous farming village. There, we grew close to our guide, Buddi Kumar Rai—the first university graduate in town. He helped us meet the local people, including a shaman, a 75-year-old midwife, a retired Gurkha soldier, a schoolteacher, and others.

Buddi became our “sherpa” brother. He had the lifelong ambition to found a library in Badel, telling Marge and me that the people of his town were eager to vote, but they didn’t know whom to vote for. They needed newspapers. They needed books.

So for our later return trips, Marge and I gathered donations from friends. Whenever our birthdays were coming around, we requested money gifts, not for ourselves, but to build and stock Badel’s first library. It began in a villager’s living room, eventually acquiring its own building. Then we learned that toilets were also needed, so we did a new round of funding for the installation of a sanitation system.

These contributions didn’t change the world. But I for one felt I’d been given an immense opportunity to see how people live their lives in another culture. I had the privilege of getting to know them. And though I’d never been religious in any way, I witnessed how spirituality makes a difference in their lives. The donations we arranged were by way of thanks to a community that had given Marge and me so much.

My last trip to Nepal was in 2002. But back here in New York, my connections there recently deepened when I discovered the filmmaker-actor-improv-performer-mover-shaker Alex Harz’s documentary THE QUEST: Nepal, which debuted on Amazon Prime on May 24, 2022. It was timed to the week of International Everest Day, May 29, the annual celebration of the first climbers, Sir Edmund Hillary and his Sherpa guide Tenzing Norgay, to have reached the top of Mount Everest in 1953.

In this beautiful film, Harz records highlights of his 52-day climb in 2018 to the summit of Everest, or as the Nepalis know it, Goddess Mother of the World. But even more than that, his documentary comes to us as a welcome gift of clean air, space, and overcoming odds—an adventure with perfect timing at a moment when we all need an escape—from the country we call our own, which seems lately to have gone awry, and with some of us still semi-cloistered in lingering Covid terrain. Harz’s film shines with brilliant colors, and the stark, icy passages he traversed.

Eager to make contact with him, I arranged for a phone interview. 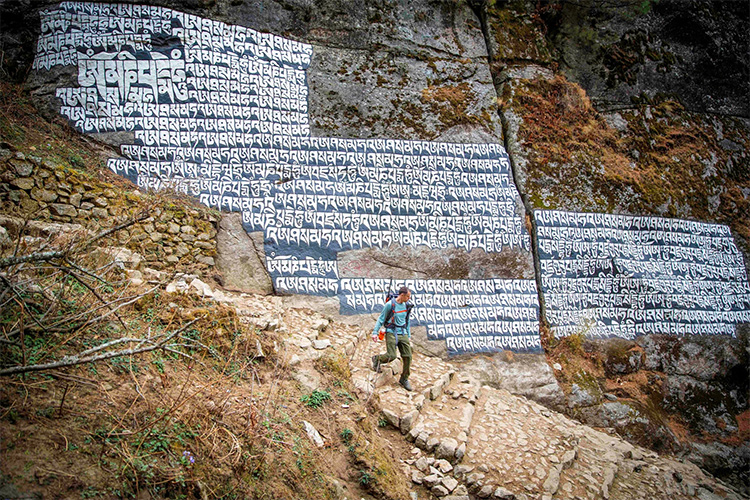 We wound up speaking, for one thing, about flying into Kathmandu, and how so many other visitors find it noisy, chaotic, and malodorous—and can’t wait to board the next plane out. Others, like Harz and me, are immediately captivated.

Nepal is “a spiritual nation,” he told me. “It’s the birthplace of Buddhism, yet it is primarily a Hindu country. Material wealth or hardships aren’t determining factors to fulfillment.” Although it’s one of the poorest countries on earth, Harz echoed my astonishment over the happiness, or at least contentment, of its people—most of the time. It’s the views, the culture and especially the warmth of the people that are the strongest reasons for streaming his film. (Find it on thequestnepal.com)

Harz shared his experiences with the Nepalis who helped him reach his stated goal: the summit of Mount Everest. Climbing the world’s highest mountain certainly was a triumph for him. It was on that peak that he had his biggest thrill. He and his climbing partner, his Sherpa brother Tashi, found themselves completely alone, right at the top, for 45 minutes.

“This is not only unheard of,” said Harz, “but to have the upper mountain and summit all to ourselves was completely unexpected.” He is passionate about this firsthand, life-changing experience. And to share it with audiences, he describes it as “a gift I’m truly grateful for.”

Commenting about the summit on the Movieweb website, Harz described the view, 29,032 feet above sea level, as “absolutely breathtaking. It gets to hundreds of miles into Nepal, India, and Tibet. You can see the curvature of the earth …. It’s really almost something that you can’t believe is humanly possible when you get to take those views in through your eyeballs from up there.”

That, I have to admit, is far from anything I experienced in Nepal, what with my time there centered on its people and contributing what I could to the village and villagers I’d come to know.

How did Harz prepare for his journey? For a year, he trained for one to three hours per day, seven days a week. I had trained by going up and down a thousand steps a day with a loaded backpack. Living on Long Island—Port Washington—as I did at the time, it was hard to access so many steps. But fortunately a friend of a friend who lived in a high-rise building let us climb up and down her staircases.

Harz told me he remembered his good friend and expedition leader, Ryan Waters, telling him in Kathmandu that no matter how successful or not he would be in climbing Everest, this expedition will change his life forever. “He was right.” Nepal changed my life too, even on lower terrain.

You may enjoy other stories in NYCitywoman: