Two New York City women have successfully turned retirement into an opportunity for starting a new career. Both left the safety and familiarity of an office and ventured outdoors using nature as the palette for their visual artistry. And now they show and sell their art. 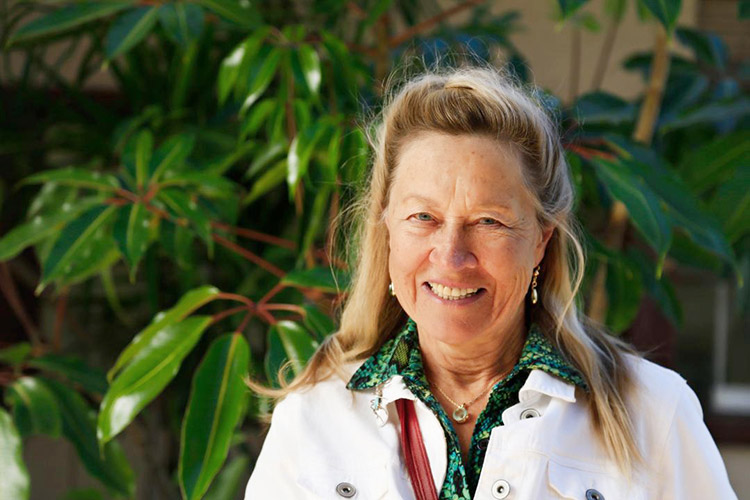 Virginia Klute has had a lifetime passion for plants, flowers, and trees sparked by a school trip to the New York Botanical Garden at age nine. Growing up in Staten Island next to a wooded area, she immediately became an explorer of nature—hiking, observing, and capturing her findings on paper using crayons.

Klute remembers the joy of running through the woods in jeans and sneakers watching the violets, spring beauties, jack-in-the-pulpits, trout lilies, ferns, skunk cabbages and marsh marigolds wake up from a winter’s sleep. She has documented these childhood adventures in a series of books for young people entitled The Ginny’s Woods Series. With illustrations and text, readers are educated about the changes that occur from season to season in her beloved natural setting.

From as early as her elementary school days, Klute has maintained this interest, continuing to discover and record nature’s botanical beauty across countries from Mexico to Canada. What began as a hobby has now become a second career.

Dr. Virginia Klute Murray, as she had been known, received a certificate in Periodontics from Columbia School of Dental and Oral Surgery in 1974. As documented in the Science Section of the January 7, 1988 New York Times, she developed an expertise in synthetic bone grafting techniques—a subject about which she published papers and lectured. Klute ended her distinguished thirty-five-year career in 2012, leaving behind a very disappointed following of long-term patients.

For several years, as she approached retirement—a word that was not in this very active woman’s vocabulary—the question of what to do next was constantly on Klute’s mind. Leading a life of leisure was not a possibility. The answer came in 2004: Of course, she would become a botanical artist! While maintaining a full practice, she prepared for that future by enrolling in classes at the New York Botanical Garden. In 2010, after six years, 210 class hours, not including homework, and a final project composed of seven paintings, entitled Wildflowers in Watercolor, she received a certificate in Botanical Art and Illustration.

On being a botanical artist

“I only paint living subjects that inspire me,” says Klute. “Then I try to give them life on paper with layers of paint for depth, movement, and color. I spend hours hiking, exploring, and observing. Inspiration for the next painting can come from anywhere outdoors—a tiny, barely visible plant such as the scarlet pimpernel or wild grapes climbing up a bush.

“Being a periodontist required precise attention to fine details, strong hand-eye coordination, focus and intense concentration. Of course, I use all these skills as a botanical artist. But, the creation of art involves innovative techniques for capturing texture, color, and form. For example, how do you paint the velvety surface of mistletoe? You have to experiment and combine a set of skills that will illustrate the true texture of this plant.

“Recently, a revelation occurred when I found a goldfinch feather on a hike. I thought, I can paint that! I can combine pen and ink and watercolor techniques to illustrate bird feathers, butterflies, and other insects! It was a magical moment that carried me forward, expanding my world of subjects from flora to fauna. 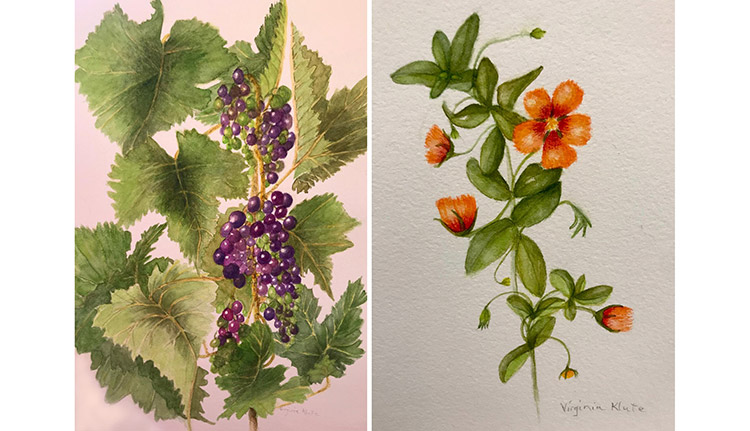 “I strive to make each image as real as possible, and the accurate depiction of reality gives me great satisfaction. As an artist, I want to continue to grow, capturing and preserving the gifts nature offers to all of us.”

Klute’s paintings were routinely on display at her New York City office both during her New York Botanical Garden studies and after the program was completed. There were solo exhibitions, as well, in Chester, New Jersey and Goose Creek, Virginia and group shows at the Northeastern Society of Periodontists and New York Dental Association. Recently, in San Diego, California, she participated in a two-person show at the Southwestern Art Association; and presently, her work is featured at the Spanish Village Art Association, also in San Diego.

Klute’s original paintings are in numerous private collections across the country. Time is the gift of retirement, and it has given Virginia Klute a new career and an ever-expanding opportunity to explore and depict the beauty of the natural world.

Interested in seeing more of Klute’s paintings? Go to virginiaklute.com. 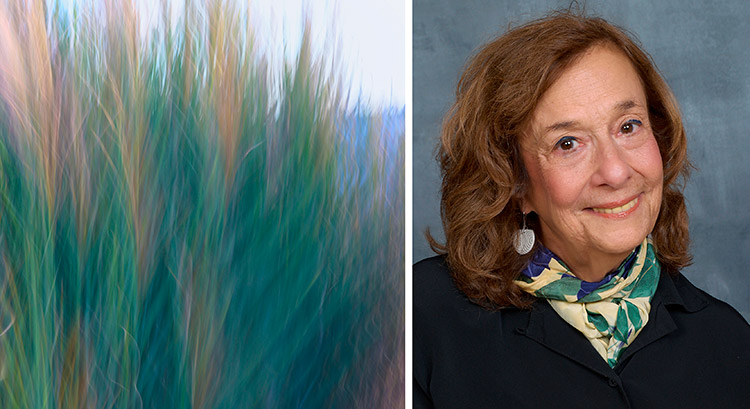 Lee Goldstein attended the High School of Music and Art and then graduated from the Pratt Institute with a major in Fine Arts. She first had staff jobs in book and magazine design and production at Time magazine, Macmillan Education, and at John Wiley & Sons. But with the birth of her daughter, Goldstein became a freelancer, designing books, journals, and catalogs for such clients as Wiley College, Prentice Hall Nursing, and Mosby’s, a publisher of medical dictionaries.

Graphic design involved understanding the subject, market, budget, author, and editorial goals of each publication and then designing the interior and cover to help sell the product. Sitting at a desk, there was a great deal of rumination about how best to express these elements using color, format, type, and tone. All in all, for Goldstein this kind of work had become a static process; and after 45 years as a publication graphic designer, she retired in 2015.

Living in Roslyn, Long Island, Goldstein was the parent of two children, an involved grandmother, and a recent widow. At this time, she became aware that the creativity of her youth had been in remission during her career as a graphic designer. She was ready for something new.

Preparing for a second career

Goldstein had taken a photography class in college and loved it, but she’d put away her camera until, at age 68, she took her first photo with a smartphone. A voice from the past whispered, I remember loving this process—making composition decisions, the immediacy of artistic choices, the expression of emotions. This calling to communicate her creativity through photographs could not be ignored.

Dusting off her old Canon SLR film camera would have required an expensive fix; anyway, it was clear that Goldstein needed to go digital. As it turned out, her son had a Canon digital single lens reflex camera (DSLR) he’d purchased second-hand for an adult education photography class he had taken.

He gave his mother the camera, and that present was the beginning of a new and consuming passion for her. It was with this camera, in 2016, that Goldstein took her first photograph, of flowers. But learning to use the DSLR, and trading in long-ago darkroom skills for the digital post-processing world of Adobe Lightroom and Photoshop entailed a year of effort. Mastering the basics required weeks and weeks of shooting, but all the while, Goldstein was becoming an explorer with a camera, moving from one natural setting to another in her Long Island hometown area.

In 2018, she was accepted into the prestigious Portfolio Development Program at B&H Photo, a Manhattan camera store recognized by Newsweek as a top leader in the consumer electronics field. This was a rigorous course of critiques and lectures about the art and business of photography. Two themed books were required as final projects for graduation. The first, entitled The Waters of North Hempstead, contained photographs of the estuaries, ponds and streams, and the flora and fauna supported by these waters. The second, Lines, was a compilation of abstract and representational images from nature.

On being a photographer

“For me, taking photographs is all about movement and intuition,” says Goldstein. “It’s a daily quest for images that requires none of the rumination needed for graphic design. I might wake up in the morning to the thrill of a foggy day, race outside, heart hammering with anticipation of what could be discovered at a specific location. That destination might never be reached, but on the way, a leaf, an abandoned building, or silhouettes of people could capture my attention.

“Then curiosity takes over and I revel in it, as the visual stimulus is followed in what feels like slow motion. I lift my camera and think: What is my vision? What do I want to express? But that reticent moment ends abruptly with the first click of the shutter when I become all muscle and one with the camera, pivoting, swiveling, ducking and twisting as image after image is recorded.

“Photography also allows me to explore my love of abstraction. Leaping Lights was created while shooting a harbor view after sunset. I became intrigued by the colored lights which dotted the night’s sky. Oblivious to the mosquitoes, I stood there experimenting with keeping the shutter open and panning the camera.

“Photography has become a beautiful obsession that fills my days with adventure, gratitude, and the joys of creative expression.”

Goldstein’s photographs have appeared at SoHo Photo’s B&H Event Space annual exhibits in 2018 and 2019, at the Sid Jacobson 2018 Juried Exhibit in Roslyn, New York, at the Atlantic Gallery in Chelsea, NY, also in 2018, and at the Sea Cliff, New York Library in 2017.

It has been four years since Lee took her first photograph with a DSLR camera. Every step along the way has contributed to her transition from amateur to professional. Private clients now hire her to cover special events, and her photographs appear in print and digital news outlets. It is fair to say that Lee Goldstein has succeeded in establishing a new and rewarding career. She remains an explorer with a considerably upgraded camera, still enthralled by nature who continues to evolve as an artist.

Ellen Freed is a writer, editor, and instructional designer. Along with Dr. Thomas Vietorisz, she is co-author of Recovering Humanity: A Blueprint for Survival.