Get out and support women’s fundamental right to choose. Our liberty is at stake 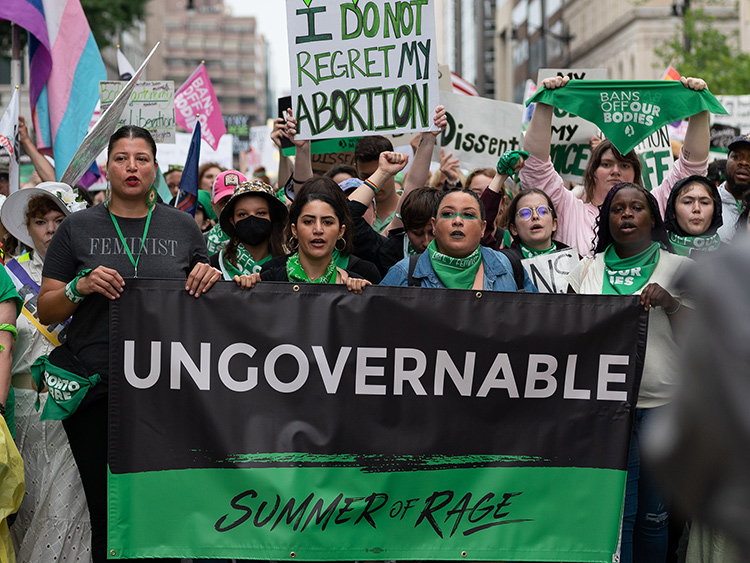 Nearly two months after the Supreme Court knocked down Roe v. Wade, the world of maternal health is in cruel chaos—as is becoming more and more evident daily. Eleven states have banned abortion, four now ban abortion at six weeks (when most people don’t know they’re pregnant), and more bans are on the way, despite the fact that more than two thirds of Americans are in favor of retaining Roe, and 57 percent affirm a woman’s right to abortion for any reason.

Anyone who can become pregnant must now face the reality that almost half of the country is in the hands of legislators who believe that your personhood and autonomy are conditional; who believe that, if you are impregnated under any circumstance, even rape or incest—you have a legal and moral duty to undergo pregnancy and delivery. In Texas, children age nine, ten and eleven, who don’t yet understand sex abuse, are faced with forced pregnancy and childbirth after being raped. In Ohio, a 10-year-old girl, raped twice by the same man, had to travel to Indiana for an abortion.

Many doctors are paralyzed into inaction, worrying about legal repercussions: One woman in Tennessee, who had been informed that she was carrying a malfunctioning fetus and she risked death, found herself on the operating table, prepped for an abortion, when she was told the procedure was no longer legal, so she had to get up and leave.

Pharmacists are unwilling to fill prescriptions for drugs easing miscarriages, because the drugs are also used for abortions—not to mention for a variety of conditions unrelated to pregnancy, such as stomach ulcers, certain cancers, and addiction. In some states, CVS has instructed pharmacists to verify that the prescriptions it fills will not be used to end a pregnancy, out of fear of legal reprisals. Some states have even made it illegal to order abortion pills by mail. Missouri recently proposed classifying the delivery or shipment of these pills as drug trafficking. Louisiana just passed a law that makes mailing abortion pills to a resident of that state a criminal offense, punishable by six months’ imprisonment.

Clearly, we need to be unconditional in our support of abortion as a necessary precondition to justice and equal rights if we want to maintain the rights that we have had for almost five decades in all 50 states!

We must heed the call of Florynce Kennedy—the great activist/writer/lawyer who was a co-founder of NOW and, through her litigation, helped clear the way for New York to become the first state in the country to legalize abortion: “Don’t agonize, organize.” (Another favorite by Kennedy: “If men could get pregnant, abortion would be a sacrament.”) 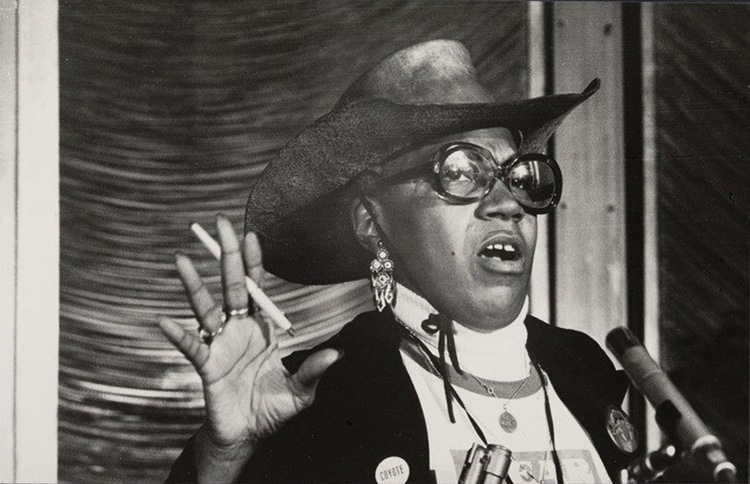 Following are a roundup of suggestions for what we can do now:

After the June 22 Supreme Court decision and a week of tears, depression, and outrage, I headed to Pennsylvania with three other New Yorkers as part of a voter sign-up drive organized by Swing Left’s Target Majority NYC. There were four of us in the car, two who are inveterate volunteers. The day’s reward: We signed up scores of new voters. Carpooling is slowing down in the summer, but you can be sure that it will rev up in the fall; meantime, phone banks and texting groups send info to voters in swing states. You can find a group that’s close to your home by logging onto the Swing Left website and putting in your area code and the distance in miles you’re willing to go. Many organizations arrange rides to swing states.

(Read Crossing the Hudson to Reclaim the Nation, Suzanne Charlé’s story about canvassing in New Jersey before the 2018 midterm elections.)

Volunteers for National Institute for Reproductive Health canvass and phone-bank for pro-choice candidates and push for key legislation. This organization is looking for writers and political campaign volunteers to amplify the pro-choice message via social media and op eds. In Manhattan, call 212 343-0114 or email activist@prochoiceny.org.

Help get out the vote for candidates who support a woman’s right to choose, give donations—and vote! The importance of voting became clear earlier this month, when voters in the “red” state of Kansas came out in record numbers to resoundingly reject the effort to strip their state’s abortion protections. “Abortion is an energizing issue,” as The Washington Post noted, and we need to head into the midterm elections with new vigor.

National Network of Abortion Funds lists organizations in states across the nation that support financial and logistical needs for those arranging an abortion. 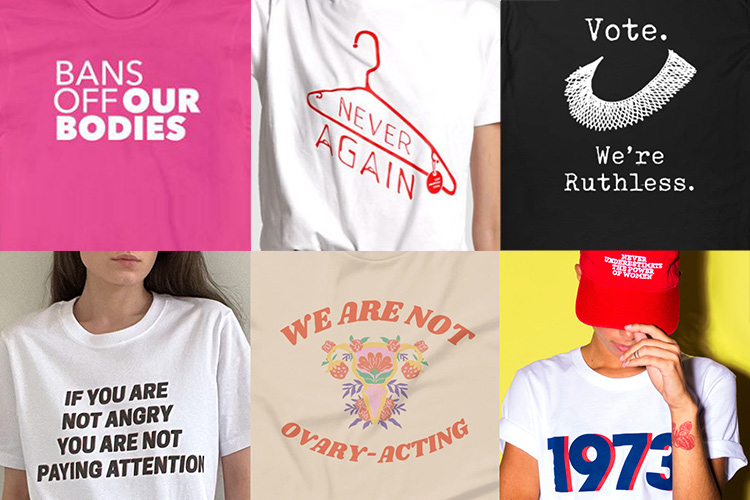 Here in New York are several organizations that help women from all over the country receive abortions:

Planned Parenthood of Greater NY (PPGNY) has a variety of ways you can help.

Interested in local events—like helping advance important legislation, including the Equality Amendment—or escorting women on their way to an abortion? Contact Gabriela Andrade, M.P.P (gabriela.andrade@ppgreaterny.org. The next escort training will be held on September 15.)

Choices Women’s Medical Center in Jamaica, Queens was one of the first abortion clinics in the U.S. Merle Hoffman, who established Choices 50 years ago—two years before the Roe v. Wade decision—says the number of women coming from out of state has tripled lately; locally, numbers have gone up due to the arrival of Ukrainian refugees who became pregnant as the result of rape.

Volunteers can help by escorting women to abortion clinics, where “there are groups haranguing the patients,” says Hoffman. In the Jamaica Avenue office, you can answer phones. Contact outreach@choicesmedical.com to find out more.

National Organization for Women offers ways to advocate for laws and policies that preserve reproductive rights in a post-Roe America.

Reach Out to Those in Need

If you know someone considering or in need of an abortion in Manhattan or Brooklyn, you can help her contact Planned Parenthood of Greater New York. (See above.)

Assisting a woman in Queens? Have her contact Choices Women’s Medical Center. (Also see above.)

For women in states where abortion is now illegal, be sure to warn them not to discuss their situation on social media and only go to known websites, such as the Planned Parenthood national sites, for obtaining information.

For information about groups that help with abortions—transportation, housing, medical fees, childcare, and the like—go to National Network of Abortion Funds. Groups are listed by state.

If a woman from another state plans to have an abortion in New York, have her contact The Brigid Alliance or New York Abortion Access Fund.

These groups help fund and co-ordinate travel and support that make choice possible. (The average cost is $1,250 for travel, lodging, and case management.) New Yorkers can also receive assistance with child care and other needs at the time of the abortion.

For the rest of us, NYAAF seeks donors and volunteers who can write content, such as blog posts and direct mail, offer legal guidance, and work the staff intake line: Contact info@nyaaf.org.

The day the Supreme Court handed down its decision, tens of thousands of Americans took to the streets, from Manhattan to D.C. to San Francisco. On July 19, New York Representatives Carolyn Maloney and Alexandria Ocasio-Cortez, along with other Democratic lawmakers, were arrested during an abortion rights rally, as they marched from the Capitol to the Supreme Court.

You, too, can protest by joining actions sponsored by various women’s groups. Women’s March is planning a march on Oct. 7-9th in Washington, D.C. to put everyone on notice: “WE WONT GO BACK.” You can keep up to date on this and other protests by going to the Women’s March website and joining a “circle”—a group of women who take action locally as well as nationally. Groups like Planned Parenthood also organize large protests.

The We Won’t Go Back coalition’s website includes a map to locate planned demonstrations throughout the U.S. “We must organize,” reads the call to action, “to sound an undeniable alarm to emboldened local lawmakers that they cannot further erode an already insufficient right to abortion and sexual and reproductive healthcare for so many.”

As AOC so aptly put it: “This is a generational fight.”

It’s wise to prepare before you protest. The Planned Parenthood site makes many suggestions, and the ACLU gives specifics about your rights under law. Do realize that even if your protest is peaceful, you can still be arrested. Brittany Ramos Debarros, a Staten Islander who served in Afghanistan and is running for Congress in the NY-11 district, was arrested on June 30 along with other abortion rights advocates in a sit-in in D.C. At the time, Kelley Robinson, executive director of Planned Parenthood Action, couldn’t have been more succinct: “We are making sure that we’re putting our bodies on the line for this issue,” she said, adding that this will be “a summer of defiance, a summer of dissent, a summer of activity and action.”

Unable to march? You can make an impact in other ways. Planned Parenthood has phone banks and texting parties to get out the word. Just sign up and you’ll hear the choices. Don’t be shy!

Suzanne Charlé has written for numerous publications, including The Nation, House Beautiful, and The New York Times, where she was a freelance assigning editor for the Magazine. She has co-authored many books, including Indonesia in the Soeharto Years: Issues, Incidents and Illustrations.

For other NYCitywoman articles by Suzanne Charlé, see:

Crossing the Hudson to Reclaim the Nation