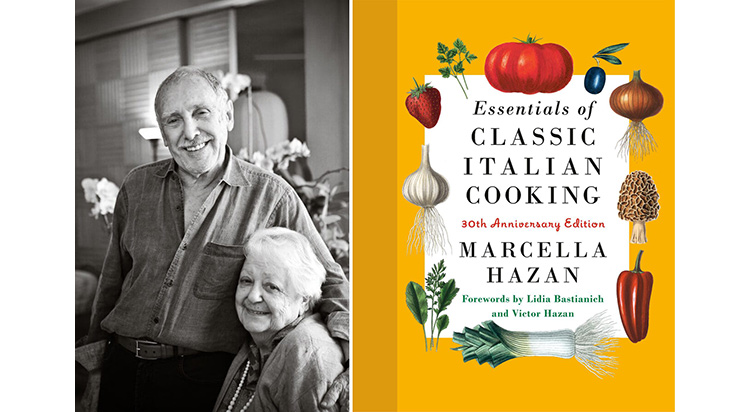 Three decades ago, Essentials of Classical Italian Cooking was published to much fanfare. No surprise, since its author, Marcella Hazan, was to Italian cooking what Julia Child was to French, both introducing to American cooks to the soon-to-be-loved cuisines.

Now Knopf has published the 30th Anniversary Edition of Hazan’s opus, a handsome tribute to Marcella, who died in 2013. As Lidia Bastianich, of the TV series Lidia’s Kitchen fame, writes in her foreword: Marcella’s “recipes are simple, delicate, and authentic, but, most important, they work.”

They work, in part, because of Marcella’s training as a biologist. Victor Hasan, her husband and translator, writes with deep compassion and humor about her early life in Italy. Anatomy was one of Marcella’s strongest subjects—which resulted in her brief arrest by a German patrol, who saw her carrying a skull she was studying for class. Decades later, she used that knowledge to instruct her cooking students about different cuts of meat.

In fact, Marcella only learned to cook when the newlyweds moved to New York in 1955. She learned quickly, notes Victor, since “she knew that there is nothing as vital to an Italian marriage as carefully prepared and flavorful food.” Soon the young Italian was teaching New Yorkers how to cook pastas and risotto; in 1970 Craig Claiborne of The New York Times profiled Marcella and her recipes, translated by Victor. Editors asked for a book, and the rest is history.

In this classic, Marcella instructs readers on the fundamentals of Italian cooking, “where flavor starts”; the basic fresh components; how to make fresh pasta (11 pages on the dough alone). Her tomato sauce with onion and butter—possibly her simplest and most cherished recipe, with over 9,000 downloads by Times readers—leads a parade of hundreds of recipes: pasta, risotto, soup, seafood, meat, vegetables salads, pizza, and desserts. A Bon Appetit book of the year, this striking edition is an inspiration for beginners as well as professional chefs and food writers. As Madhur Jaffrey writes: “Marcella Hazan takes you by the hand. For example, if you are going to make risotto, she tells you what rice to buy….what kind of temperature to cook at….all the possibilities.”

At first glance, it seems an unlikely setting for an endearing and lasting interracial friendship forged between a computer executive-turned-hotelier, H. H. Leonards, and Rosa Parks, mother of the Civil Rights movement—who’d sat down with dignity, refusing to give up her seat to a white person on a Montgomery, Ala. bus. Their longtime friendship is conveyed in Leonards’ Rosa Parks Beyond the Bus: Life, Lessons, and Leadership (R. H. Boyd).

Back in 1985, Leonards opened The Mansion on O—a unique, eclectic inn in Washington, D.C. aiming to nurture diversity and the human spirit. At the request of an NAACP representative who’d heard she operated an in-house Heroes in Residence Program, she opened her door and her heart to Parks.

This businesswoman-turned-innkeeper and a Black activist from the Jim Crow South, although never on a first name basis—they addressed each other as Mrs. Parks and Lady H—formed a deep connection. Leonards’ book shares the wisdom she gained, as well as humorous and touching anecdotes, such as when Parks was driven past the Secret Service in her yellow school bus to the White House door to meet with Presidents Clinton and Bush I.

Recollections of conversations are concise but inspirational—occasionally overly so. Describing an assault that dislodged the then-ailing octogenarian’s pacemaker, Leonards gives the impression that Parks’ strong will and spirituality were enough to put the pacemaker back into place, straining credulity.

“Mrs. Parks challenged boundaries her entire life, and I believe she should be remembered for more than just one incident—even though it was pivotal,” Leonards says. “While always respectful, Mrs. Parks was a warrior against an unjust social order.”

The wisdom, spirituality, and love conveyed in this book have a welcome place not only during the holidays but in our troubled world today. The author shares Parks’ philosophy, borrowing the Judaic term Tikkun Olam: Repair the world with love. –Karen Feld (A member of the O Museum Board) 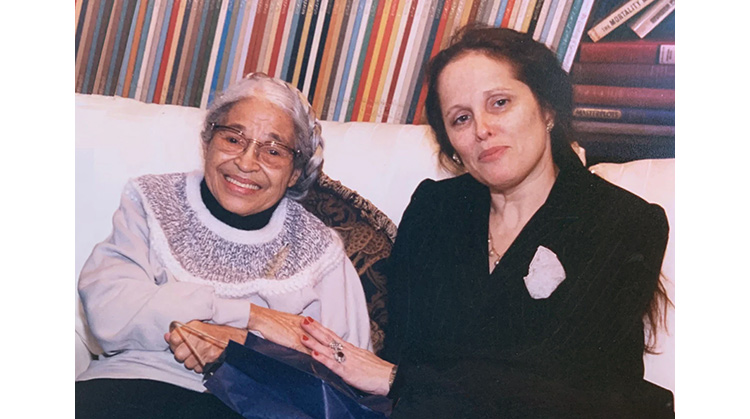 It was at a medical esthetics conference in Paris, back in 2005, that Mark Richards, M.D., first learned of the disease-reversing benefits of testosterone—notorious for being mistaken as the male hormone. Women need testosterone too. Though we have less of it in our bloodstream, it is the most abundant active hormone in women, as well. One amazing fact that emerges in this book: all of the estrogen in our cells is manufactured directly from testosterone.

This D.C.-area plastic surgeon (a White House physician consultant during the Obama administration and the first Trump years) researched the subject in depth before introducing testosterone pellet therapy into his practice. Now he’s written a book on the subject, Nobody Wants You Healthy: Achieving Better Health by Avoiding the Corruptions of Modern Medical Science (APub). Bolstering his claims throughout the book are carefully vetted journal article links at the end of each chapter. He also provides monthly podcast updates on the book’s website.

As Dr. Richards documents, the modern world is awash with hormone-disrupting chemicals that have lowered our testosterone levels over 60 percent since 1970. But T, a supernova hormone, with receptors in nearly every tissue in the body, is essential for preventing or improving almost the entire range of chronic health scourges that beset the world today: heart disease, breast and other cancers, diabetes, dementia, depression, brain fog, Alzheimer’s, osteoporosis—which cost us our health and our lives, not to mention trillions of dollars in medical care and drugs that Dr. Richards says can be greatly reduced. He explains the benefits of administering this hormone, with a short half-life, in time-release pellet implants (in the upper outer buttock fat area for women and the love handles for men). These pellets, about the size of a grain of rice, deliver nonstop benefits for months at a time, as if the body were producing T naturally (as it does in abundance when we’re young).

Showing the scientific basis for T’s benefits is Dr. Richards’ main thrust in this book. But its catchy (and yes, slightly exaggerated) title points to a second motive he had in writing it. He maintains that medical professionals and the public alike have been consistently lied to—i.e., we’ve been duped—by purposeful mis-education on T’s benefits. He points to a landmark 2005 Stanford finding proving “over 75 percent of pharmaceutical-industry-funded medical studies are false.” Why such malfeasance? Simply put, chronic diseases are big moneymakers when they are treated but not cured or prevented by patented drugs. No wonder Dr. Richards believes T implants should become readily available as an international public health measure in order to prolong healthy lives and reduce national health expenditures. –Linda Dyett

Linda Dyett’s previous T articles in NYCitywoman include a feature story, Testosterone Implants for Women, and a prior book review, in Books We Love in January.