A growing number of doctors regard the so-called male hormone as a boon for women’s health and vitality. 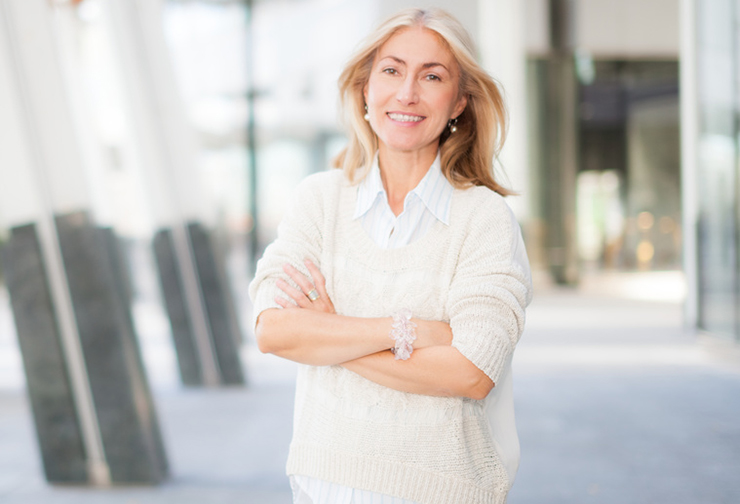 Back in 2005, a woman by the name of Meg—who’d recently arrived from California—showed up at Nancy Lebowitz’s Upper East Side gynecology practice with an unusual request. Meg, then age 52, wanted to know if Dr. Lebowitz, a clinical instructor at the Cornell Medical Center, could continue the hormone therapy she’d been getting for the past two years. Meg wasn’t on the standard estrogen-progesterone combination that many postmenopausal women take; she was taking testosterone, delivered in the form of tiny, time-release pellets inserted in a quick and all but painless procedure in the fatty tissue of the hip. These inserts, she said, administered every four months, dramatically improved her energy, libido, muscle tone, mood, and overall sense of well-being. So however else her life was about to change, Meg was hellbent on continuing with this therapy.

Dr. Lebowitz herself (below), age 58, had tried testosterone cream on some patients “with mixed results at best,” but implants were new to her. So she set about investigating them and took a training course. Since then she has placed close to 1,000 patients, ages 40 to 89, on this regimen; recent patients include about 30 women recovering from breast and uterine cancers who were referred by their oncologists. Dr. Lebowitz herself has been on testosterone implants for the past eight years, with no intention of stopping. And she has also been treating her mother with implants. (See the video she made about this therapy at the end of the article.) 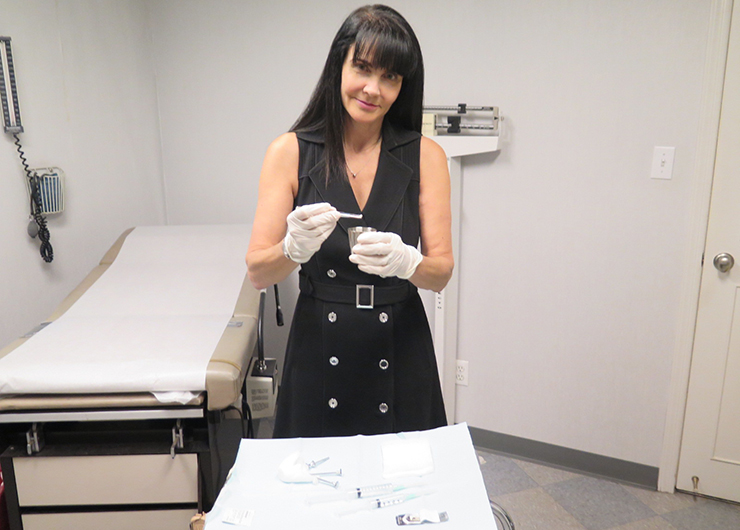 Testosterone implants for women haven’t yet gone mainstream, but thousands of doctors and patients attest that time-release testosterone works, with numerous peer-reviewed journal studies and patient results showing that it’s safe, health-giving, and rejuvenating. Jennifer Jose, a Darien, Connecticut internist, calls testosterone “life-changing” and points to her own 87 year-old mother, “who’d suffered from near-crippling arthritis, but now has thrown away her cane and attends ballroom dances four evenings a week.” Susan Matos-Cloke, an internist in Paramus, New Jersey, tells of a formerly depressed, fatigue-ridden patient, who a few months after starting testosterone, “looked so good at her daughter’s wedding that no one recognized her.”

How appropriate that now, a time when traditional male-female roles are being widely questioned, testosterone for women as a life-enhancing medication is beginning to take hold nationwide. “It’s the most abundant biologically active hormone in women as well as men,” explains Rebecca Glaser, a breast surgeon in Dayton, Ohio, who has become a leading researcher and advocate of testosterone therapy for women. Women produce 10 times more testosterone than estrogen during their reproductive prime, but it begins to decline in the years before menopause. That’s when fatigue creeps in and libido is lessened, as is mental clarity. Many replacement proponents say it’s the loss of testosterone—not estrogen—that really marks the start of what we’ve long assumed were the inevitable maladies of growing older.

• There is strong evidence that testosterone not only safely treats the symptoms of breast cancer, but may also help prevent and limit the course of this disease. (See a 2015 Maturitas study co-authored by Dr. Glaser, and Dr. Lebowitz’s video for breast cancer survivors.)

• It protects the brain and nervous system and is beneficial in treating Parkinson’s and Alzheimer’s diseases, traumatic brain and spinal cord injuries, seizures, MS and PTSD. “It has also been shown to increase myelin, the insulating material surrounding neurons,” adds Dr. Lebowitz.

• There appears to be a role for testosterone in treating autoimmune diseases, including rheumatoid arthritis. Testosterone also increases bone density and lean muscle mass; in combination with a healthy diet and exercise it helps the body shed fat and cellulite. Many women see their upper-arm batwings disappear.

Why Hasn’t It Gone Mainstream?

Testosterone implant therapy was introduced in Europe and the U.S. in the 1930s, and “its safety has been demonstrated for 80 years in five continents,” says Gary S. Donovitz, medical director of BioTE Medical, a consortium of hormone therapy doctors. Overseas, testosterone is approved for a variety of conditions in women as well as men. But in the U.S., while it is FDA-approved and widely prescribed for men, testosterone has yet to win approval for women.

This therapy has many detractors. Margaret E. Wierman, for one, the Endocrine Society’s vice president of Clinical Science, notes: “Scientific studies have found that women who have low testosterone levels do not show any specific signs or symptoms of having a health condition, so they should not be treated for one. The only situation where the Society suggests women should receive testosterone therapy is if they are diagnosed with Hypoactive Sexual Desire Disorder, a condition where a woman has no interest in sex and that lack of interest causes personal distress.”

Dr. Glaser agrees that “a single testosterone level may not reflect what is happening clinically.” In a 2011 Maturitas study of 300 patients, she writes, “levels did not correlate with severity of symptoms or response to therapy. However, and most importantly, adequate doses of testosterone delivered by pellet implants effectively treated psychological, somatic, and urogenital symptoms in both pre- and postmenopausal women, regardless of baseline levels. Over 90 percent of women with symptoms improved on testosterone therapy. That’s the bottom line. It works.”

Dr. Donovitz adds: “Low testosterone in women absolutely has been associated with signs and symptoms, including ‘brain fog,’ weight gain, mood swings, depression, joint pain, and night sweats. We do not need a syndrome to improve their quality of life as they age. Women with these symptoms do not want or need antidepressants, fad diets, diet pills, and sleeping pills. They want their life back, and hormone optimization does just that.”

Naysayers also cite a lack of sizable placebo-controlled, double-blind, long-term studies in women. Dr. Donovitz counters, “at BioTE Medical, we do 80,000 testosterone pellet insertions a year on women. The change in their quality of life has been amazing; 95% of women return because they feel incredible. Women do not have to be studied anymore; the benefits to women around the world is testimony to this therapy.” In addition, there is ample evidence that transgender (female to male) men, who take high doses of testosterone for most of their lives, show no particular adverse health effects, and in fact have a lower risk of heart disease and breast cancer.

“The major stumbling block to testosterone implants’ widespread acceptance for women is political, not medical,” adds Dr. Lebowitz. Bioidentical testosterone pellets, derived from yams or soybeans, can’t be patented, meaning the major pharmaceutical companies are unable to capitalize on them. Instead, most pellets are produced by small-scale, state-regulated compounding pharmacies, which lack the wherewithal to publicize them.

But since physicians are free to prescribe these testosterone pellets, more and more are doing so. Plus, organizations like BioTE and Body Logic MD are recruiting and training physicians to administer pellet implants in both men and women.

Still, the very idea of testosterone for women requires a rethinking of long-held notions about hormones. Many women, for instance, have a knee-jerk fear that hormone treatments in general will increase their cancer risk—though now we’re seeing that testosterone successfully treats breast cancer symptoms. And then there are women who believe, also incorrectly, that testosterone therapy even in small doses will produce male traits such as hoarseness and aggression. Inappropriate hair growth and acne can occur, but these side effects can be remedied by lowering the dose. For a rundown of other myths and misconceptions about testosterone in women, see this Maturitas article (PDF) co-authored by Dr. Glaser.

While testosterone has its own direct effect on the body, some of it is converted into estrogen via a process known as aromatization. Whether from the ovaries, adrenal gland, or pellet implant, the amount of estrogen varies from person to person, depending, says Dr. Glaser, on factors such as “diet, lifestyle, genetics, obesity, drugs, and alcohol use—with the latter three increasing aromatase activity and estrogen formation.”

Estrogen conversion has definite benefits. As the South Jersey gynecologist Colleen McCleery puts it, “estrogen helps in keeping the blood vessels leading to the heart slippery and open.” It also relieves menopausal symptoms like hot flashes and vaginal dryness. Many doctors prescribe extra estrogen to their women testosterone patients. This is often done both to optimize relief of menopausal symptoms and to maximize cardio-protection. Josh Trutt, a New York City wellness physician, notes that “heart disease kills more women than any other illness, so the fact that estrogen cuts the risk of heart attacks in half is hugely significant.”

But as Dr. Glaser points out, “it’s about balance. Excess estrogen is likely to promote symptoms such as weight gain, fluid retention, breast pain, and uterine stimulation, as well as long-term side effects like bleeding and breast cancer.” With that in mind, many doctors limit their hormone pellet therapy to testosterone alone, unless symptoms of estrogen deficiency persist. And for women with signs and symptoms of excess estrogen (or those at high breast cancer risk), estrogen conversion can be prevented by adding anastrozole, an aromatase inhibitor, to the pellets.” Up to 40 percent of Dr. Glaser’s testosterone patients are treated with an estrogen blocker combined in the pellet implant. “This may be one of the reasons we’ve seen a significant reduction in breast cancer,” she says.

Why Pellets, and Not Patches or Pills?

Women have several delivery options when it comes to testosterone—but most have limitations. Pills can cause liver damage and increase clotting factors, while creams and gels are inconsistently absorbed and can create erratic daily swings in hormone levels. Pellet implants, absorbed over time, avoid those pitfalls with the highest consistency of delivery. In a 45-second outpatient procedure, one or two pellets, each slightly larger than a grain of rice, are inserted in the hip, with no stitches necessary. The area is then covered with adhesive tape for three days. The pellets dissolve slowly, releasing small amounts of testosterone into the blood stream over four months (a feature no other form of hormone therapy can provide). Women begin feeling its effects anywhere from a few days to a couple of weeks after insertion. Negative side effects are rare, but they can include infection, minor bleeding, and the pellet working its way out.

For many women, especially those past the half-century mark, the very idea of surgical hormone implants may seem like sci-fi or an unnecessary imposition. But the results more than justify the oddity. Just ask the growing number of women whose lives have been optimized.

Below is an annotated list of New York area doctors, interviewed for this article, who treat women with testosterone inserts. Their implant fees are generally in the $495 to $800 range. Some insurers reimburse the cost of the insertion procedure.

Nancy Lebowitz, M.D. An OB-GYN with an Upper East Side practice, has treated nearly 1,000 patients—including referrals from oncologists—with testosterone implants since 2006. While she is among a small number of local gynecologists offering hormone pellets, some medical experts suggest that this specialty may be uniquely qualified to evaluate treatment options and potential side effects in women. 212-472-8676.

Susan Matos-Cloke, M.D. A Paramus, New Jersey internist who has treated hundreds of women and men—including menopausal and breast cancer patients and sufferers of post-concussion syndrome and traumatic brain injury—since 2010. 201-225-2525.

Josh Trutt, M.D. Initially a Level 1 Trauma Center ER attending physician, he is now focused on wellness in a concierge medical practice. He has treated men and women with pellet implants since 2013 and is a strong proponent of adding bioidentical estrogen for women. Dr. Trutt relocated to south Florida during 2020, and does consultations via video. Check his web page or call 786-723-3425.