“I love knowing that people all over the city are eating the food I produce.” 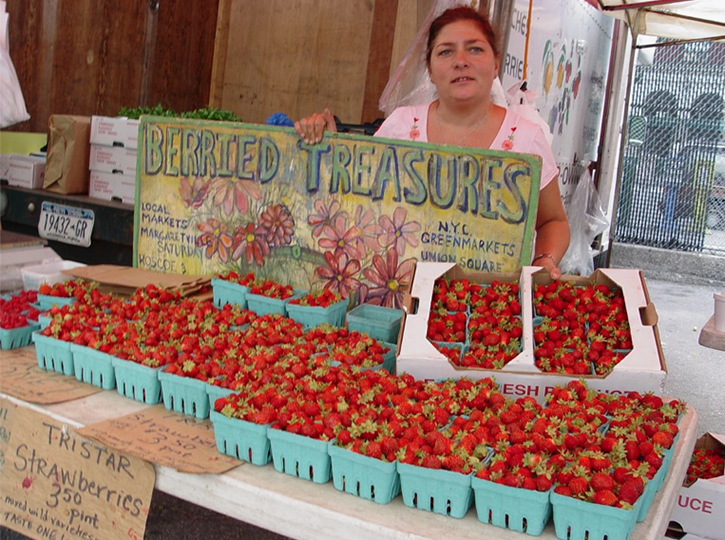 Franca Tantillo a native of Staten Island, was working as a registered nurse in Cooks Falls, New York, when she fell in love with the land around her home and planted her first acre of strawberries. That was 28 years ago. Today she is one of the 200 + family farmers in the region who raise livestock, produce honey, harvest vegetables, and grow fruits and flowers to sell at one of the 54 Greenmarkets in New York City. At Berried Treasures, Franca’s 40-acre farm in Cooks Falls, the energetic farmer rises at 3 a.m., fills her truck with plastic buckets of fingerling potatoes, pale lavender and white eggplant, and a constellation of cherry tomatoes and whisper small red ripe strawberries. Then she hops into her truck before 4 a.m. and drives 130 miles to the bustling Union Square Greenmarket.

In Manhattan, Franca and her small team set up a tent and place the vegetables and fruit in baskets and bins. As a visitor at the Greenmarket, I watch as her steady customers arrive. Alison Colby, a New York Times production manager, stops by on her bike on her way to work. Nearby Franca is encouraging Dan Barber, co-owner and executive chef of Blue Hill Restaurant in Greenwich Village to give an edible flower a try. He’s one of the 25 to 30 chefs who shop at Berried Treasures for the fruits and vegetables they’ll serve to customers that night. “Her soil is the best,” Barber says. “It’s so rich in calcium and everything she grows is so full of flavor. And I learn something from Franca every time I’m here. I don’t get that from the Bible.” 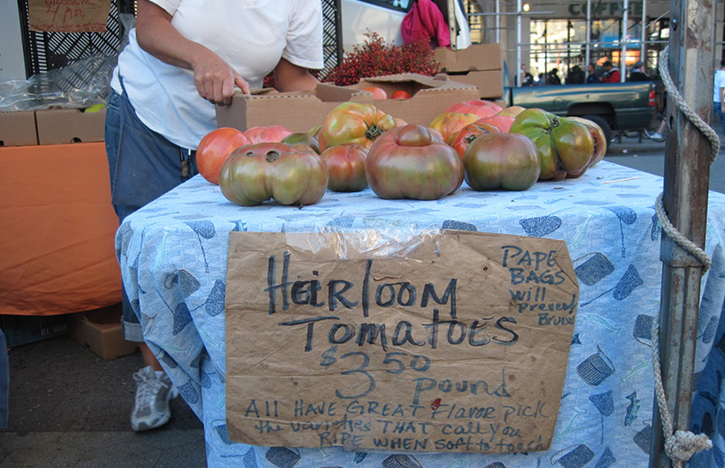 Barbra Music, an artist and designer who lives on the Upper West Side, was a customer of Franca’s for decades. Then she volunteered to help her one busy morning and now she works with Franca a couple of days a week during the fall months. “I love working for her,” Barbra says. “She wants everyone to eat well. She encourages people to taste and try things. And she never wants to see anyone go without.”

The women of the Greenmarket sell root vegetables and fruits, jams, honey, breads, herbs and mums, and, as the Christmas holidays approach, they sell wreaths, greens and holly tied with ribbon or twine. Many farmers are women over fifty who have an entrepreneurial yearning and talent and a genuine sense of connectedness to the land. Some women come from a long line of farmers or bakers and have been in the business for decades. Others, like Franca, have re-invented themselves.

Inspired by the work of Dr. Carey Reams, a physician, biochemist, naturopath and pioneer in Florida who infused soil with nutrients so it would produce healthy crops, Franca decided to learn more about the land. When she stepped into the fields, she became infatuated with the beauty and science of farming and, after planting flowers, vegetables and fruit, she knew she had found her new mission. “I was the first to bring truckloads of wildflowers and wild greens to the markets,” she says proudly. “Now they’re all over the grocery stores.” 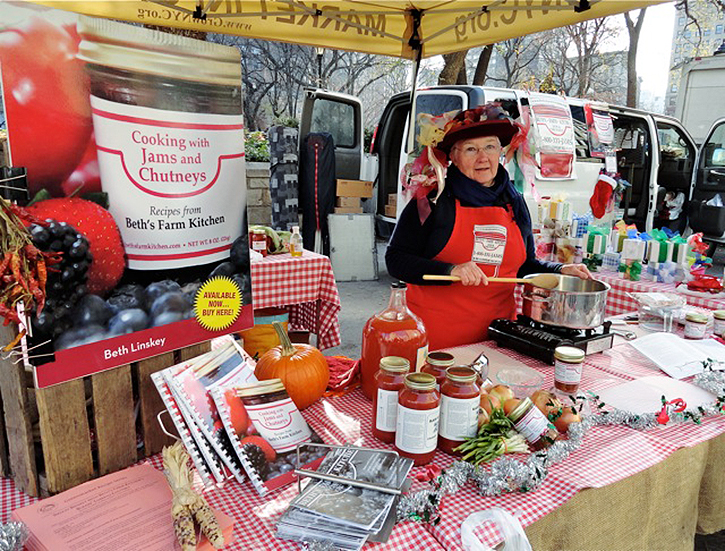 Beth Linskey, who founded Beth’s Farm Kitchen in Stuyvesant Falls, New York, was a caterer and an avowed city person when in 1981 her husband got a job in Albany. “I needed to find work that would blend my city life with my country life,” she told me. “So I learned how to be a jam maker and Beth’s Farm Kitchen was born.” It’s now thriving. Beth still lives on the Upper West Side, but she heads back to the farm a few days each week to refresh her inventory. Last year, she bought 39,000 pounds of fruit from local farmers and produced 89,000 jars of jams and chutneys and bottles of hot sauce that she sold in Greenmarkets year-round, all over the city. She was a locavore long before the word was coined. “I’m really proud of that,” she says. “I believe in local farms and think it’s really important to keep farming viable.” 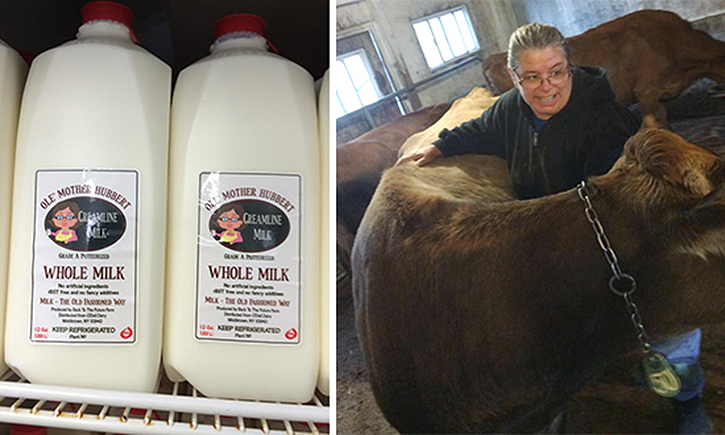 Back to the Future Farm

Rose Hubbert of Back to the Future Farm in Westtown, New York, agrees. She and her husband owned auto repair shops and a car dealership before buying a herd of dairy cows. Then they teamed up with 21-year-old Michael O’Dell, who is the youngest dairy farmer in the state. They now sell a “cream” line of milk (it is natural and pasteurized, but not homogenized) as well as eggs and poultry. “Michael shared our work ethic. He comes from a long history of dairy farming and wanted to farm so we combined forces,” Rose says. “If we do not invest in young people who want to go on to agriculture as their profession and keep farming viable, it’s a profession that has absolutely no future.” As a group of curious middle school students sidle up to her stand to ask about her dairy products for a math/science project, Rose tells them about the wonder of farming and the very strenuous work involved. “It’s the hardest work I’ve ever done,” she says. “But also the most gratifying.” The students write this down in their notebooks and then Rose shares samples: bottles of chocolate milk! 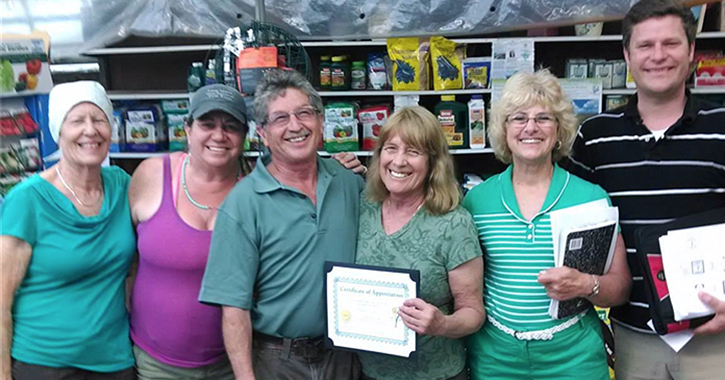 On the other side of the market Joan Tifford, a horticulturist who may be the grande dame of the Greenmarket, is seated. Now in her 80s, Joan and her son David, owners of Fantastic Gardens in Patchogue, Long Island, have their first cup of coffee around 4:15 a.m. They do battle with traffic as they drive into Manhattan, where they settle in for a long day of selling an array of flowers and plants. “This is the best city in the world and we have the best customers,” she says. “I know so many of them by name.” 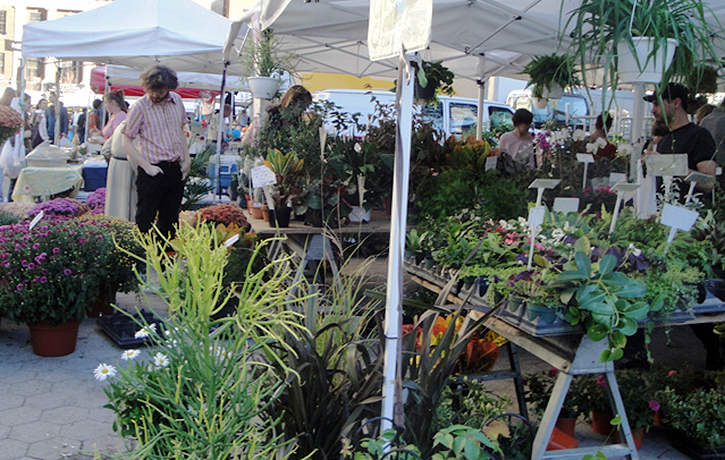 Customers and vendors draw Franca Tantillo of Berried Treasures to the Greenmarket year after year. Her day stretches on until the market closes after 6 p.m., when she packs up and sets off for the three-hour drive home to Cooks Falls. “I used to get home at ten p.m. and go out into the fields and pick—not anymore,” she says. “It’s really hard work, but no one ever died of hard work. I love to feed people. I like knowing that all over New York City, people are eating my food!”

Greenmarkets abound in neighborhoods all over Manhattan and the boroughs. Many—especially in Manhattan, Brooklyn and Queens—are open year-round. The GrowNYC website is an excellent resource, featuring days and times, maps and which markets take debit/credit, EBT/food stamps and which markets also offer compost and textile recycling. Search for other Greenmarkets on the GrowNYC website.

Jackie Fitzpatrick Hennessey has written for The New York Times, The Washington Post, and many other publications. She blogs at jackiefitzpatrickhennessey.blogspot.com and eachdaynewgrace@tumblr.com.