Why I Miss New York City 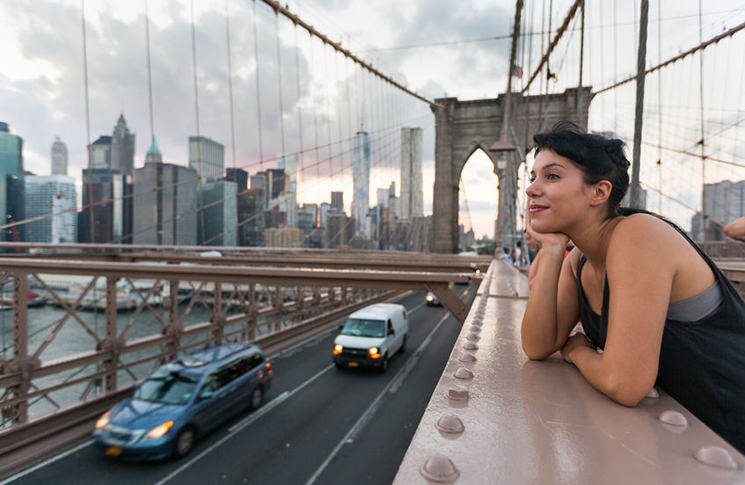 I’m a Manhattan transplant who lives in one of those newly hip L.A. neighborhoods we’ve been reading about recently. We’ve got a silent movie theater, vegan cafés, and a dance studio called Yoga Booty Ballet. My husband and I moved here many years ago, but I still suffer from Big Apple withdrawal and get back whenever I can.

For one thing, I miss seeing less-than-perfect people on the street. You are not allowed to be old or frumpy or fat in Los Angeles, and you must dress like a teenager even if you’re far from being one. The mature professional woman in a well-tailored pantsuit and vintage brooch is a very uncool style here, in spite of The Good Wife.

Actually, I miss seeing anyone at all on the street. Even Chinatown is deserted, compared to the bustling, colorful, chaotic world of Mott Street.

I miss the levelheaded rationalism of New Yorkers. Residents here buy into every fad that mumbo-jumbo-pseudo-science can offer: from the lemonade diet to high colonics. I bought a crystal necklace at a yard sale and the seller advised me to rinse it in salt water in order to remove her aura.

I miss the rhythm and cynicism of smart ass New York humor, which does not exist in any other city I’ve ever been to. I was shopping for specific ingredients for a specific recipe and stupidly asked the greengrocer for two shallots. “Two shallots? You expecting company?”

I miss all the different ways that New Yorkers connect with each other. Friends run into each other on the street and stop to chat. Neighbors meet in the elevator and stop to chat. One girl friend noticed a cute guy on the subway who was reading a book she liked. They chatted and a year later they got married. I doubt that any love matches have been created by people driving alongside each other on the 405 Freeway.

I was at the bread counter at Zabar’s and overheard an older Jewish woman ask the Puerto Rican guy behind the counter, “Luis, Did you get your daughter that book I told you about?” Compare that to the L.A. Whole Foods where a white show-biz Armani dude said to an anonymous black counter guy who was handing dude his kale salad, “I thank you, mah brothah.” I’ll take the Zabar’s yenta any day.

And speaking of food, here’s a very partial list of stuff almost impossible to find in L.A., land of the blueberry bagel: cold sesame noodles, toasted corn muffins, chocolate egg creams, crusty pumpernickel bread, onion rolls, and a Greek coffee-shop grilled-cheese-sandwich. (They use mayo in L. A.) And let us not omit Gray’s Papaya hot dogs on 72nd Street. They tried opening a New York style Papaya King in Hollywood, but nobody knew that the buns have to be grilled. A hot dog nestled in cold, slightly damp bread just doesn’t push my buttons.

I miss the neighborhood delis where you can grab a tuna sandwich, a small salad, a cold beer and a dozen roses in less time than it takes to pay for a bag of chips in oh-so-very-slow-moving Los Angeles.

I’m a night owl, but most L.A. restaurants close down around 10 pm. You can’t enjoy the basic civilized ritual of going to a show and grabbing a bite afterwards.

I miss the New York parks. Parks in L. A. are largely inhabited by blue-collar ethnic people. Most other folks stay in their own back yards, whereas New York parks are shared by rich and poor alike, and they are full of human drama, like the kite-flying contest in Central Park where we saw a contestant get disqualified because he had attached razors to his kite string in order to cut off the strings of other kites.

And then there are the countless magical urban moments every New Yorker has experienced. I stepped into the subway and was greeted by the sublime sounds of a Mozart string quartet played by a rainbow coalition of Juilliard students—which made for a much more festive atmosphere than the guy who juggles a chain-saw on Venice Beach.

I know New York has its problems, but that’s an easy fix. Any driver who blocks an intersection should get a $400 ticket and if they do it again their license is suspended for a year. Anyone who pays over four million dollars for an apartment should have to kick in another million to the city for the purpose of building affordable housing. Two million if the buyer is not a citizen.

I miss street fairs, block parties, and all the free outdoor entertainments that make spring and summer in Manhattan feel like one big communal celebration. Years ago, I was walking along a street fair on Amsterdam Avenue, following the sound of drums and horns. I came to a bandstand where a dynamic white-haired gentleman was leading a big band playing irresistible Latin rhythms. The dancing crowd was wildly enthusiastic and I had the sad thought that these extraordinary musicians deserved more substantial bookings than a mere street fair. Then I got a little closer, and recognized the band leader: Tito Puente. For free. On the sidewalks of New York.

Annie Korzen is a Moth Mainstage storyteller and the author of Bargain Junkie: Living the Good Life on the Cheap. She has written humorous essays for NPR’s Morning Edition, The New York Times, and the Los Angeles Times, among other publications. She now posts on TikTok as The Cranky New Yorker.

You may enjoy other stories by Annie Korzen:

The Ups and Downs of Turning Seventy