One got jabbed at a track event. Another went back to high school for hers. A third wound up virtually jumping a subway turnstile. A fourth got hers on her birthday 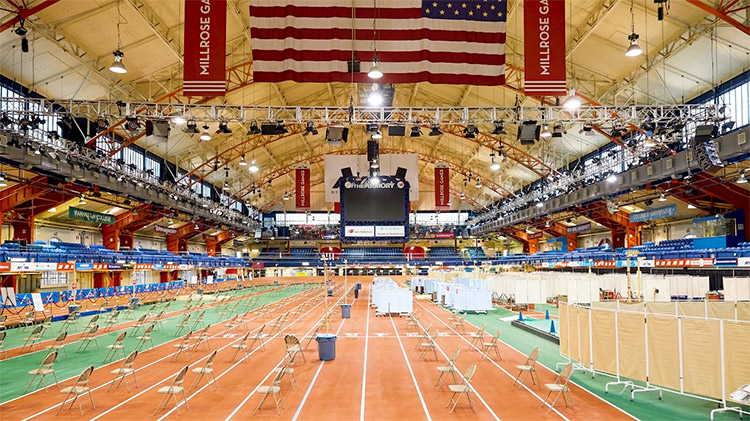 The 1950s TV police drama had it right: there are 8 million stories in The Naked City. These days, many of them are Covid vaccination tales—each engrossing in its own way. NYCitywoman has been recording them, whether at hospitals, schools, community centers, churches, and armories, where the atmosphere is that of a fast-moving assembly line—or at participating drugstores, where the the mood is easygoing, informal, almost catch-as-catch-can, with shoppers milling around perusing dental floss and Rolaids or getting prescriptions filled. But the job (jab) gets done. And for many who get their shots at even the most humdrum chain drugstore, these places become revered, as if transformed into shrines.

TRACK EVENT
It was a treat to get my vaccination at the home of the National Track and Field Hall of Fame—in the Fort Washington Armory in Washington Heights, which, appropriately enough, houses one of the world’s most famous indoor tracks. Getting there by subway from the Upper West Side, I found the place crowded but superbly organized. While waiting on line, I was surprised to see a display of shoes and other sports relics by some of the greats. Babe Didriksen’s 1932 leather spikes share a cabinet with Jim Thorpe’s javelin and Michael Johnson’s gold four-ounce Nikes.

After the shot, I recovered in a waiting area lined with photographs of famous medalists. It was all a throwback to my childhood, when I’d gone to the Millrose Games—famous track events held in Madison Square Garden. Now, the Games are held here, on a track around which vaccination stations are set up. I could hear the roar of the crowd as I was jabbed. –Karen Bruno, freelance writer

BACK TO SCHOOL
It happened late one night in mid-January, My partner Peter’s scrolling finally secured our first Covid vaccine appointments. So I quickly logged off the Zoom birthday party I was attending, opened the vaccine link, and responded to the questions that kept appearing, like a whack-a-mole game, until my date was confirmed. The morning of my appointment, nervous energy jolted me into doing three loads of laundry. I dressed in layers, expecting to wait outside in what was then raw weather. Concerned that I’d miss my time slot, I left our apartment in the Gramercy Park area ten minutes earlier than the Google Maps estimate proposed. Speed-walking to the Lower East Side, I arrived at Marta Valle High School with twenty minutes to spare.

I wandered around the empty streets, trying to recall the neighborhood’s pre-pandemic energy—the line outside Russ and Daughters…the Saturday night revelers emerging for brunch. There was no waiting line at the school. An efficient practitioner administered my shot. Afterwards, since I was in the neighborhood and had yet to visit the Essex Market in its new location, I went in and nabbed some tuna steaks, fresh bread, produce, and flowers—a different experience from shopping at Trader Joe’s or Whole Foods. –Nancy Gendimenico, NYCitywoman contributor 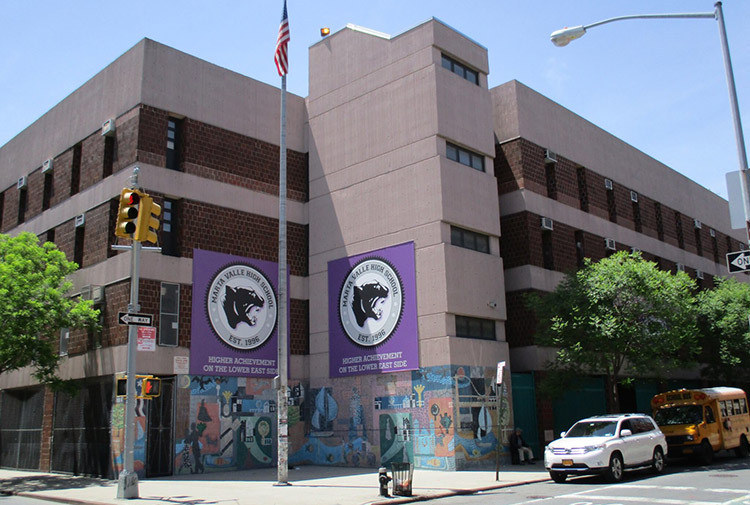 NABBING A FREE SUBWAY RIDE
My husband and I are painters who divide our time between homes on the Lower East Side and the Tuscan town of Buonconvento, where, in non-pandemic times, we conduct landscape painting classes and run gastronomic tours. The early months of the Coronavirus found us in New York. In the summer, we transferred to Tuscany, where we remained for eight months. Our little village was a great place to ride out the pandemic, but vaccinations were nowhere in sight. We were not enrolled in the national health care system, so had no idea what our chances would be. Both the UK and Brazilian variants were sweeping through nearby towns and villages, previously unscathed by the virus, and friends were infected. Despite the initial reluctance to uproot ourselves, our departure could not have come at a better moment.

We returned to New York early in March. Although not yet on the eligible list, I’d been following the vaccine rollout and had heard it was next to impossible to make an appointment. My husband, who was eligible, had checked the various sign-up websites before our departure—in vain. I watched his anger and frustration mount in silence, relieved that I was not wasting my time on futile endeavors.

The morning after our return, still on Italian time at a ridiculously early hour, I followed a link I received from NYU Langone, advising me that I qualified for a vaccination. Within a few clicks, I landed on a page with that day’s appointments and promptly signed up for an afternoon slot.

“Guess what?” I said to my husband when he arose later that morning. “I have a vaccine appointment for today!” My smug words had the effect of a challenge. He immediately took to his computer, determined to find a spot for himself. There was irritation in his hurried movements. “It’s not my fault that my health care provider contacted me! You’re in a different network,” I protested in defense. An uneasy quiet descended, which happily lifted later when he reserved an appointment at Duane Reade for the next day.

We were both in a state of amazement. Getting vaccinated was one of our goals in returning to the U.S., and while we believed it would be possible during the months of our planned stay, we never thought it would happen so fast.

My appointment made, the only thing I had to focus on was getting to Langone on time. This presented an unexpected challenge—and the only element of drama in the day’s events. I always underestimate travel time in the city, and after my long absence my calculation skills were dull. Uncomfortably close to being late when I left the apartment, I decided to take a taxi. None was to be found. The traffic was heavy and no buses were in sight for blocks. This left the subway as the only option. I raced to the Essex Street Station, only to find that the vending machines weren’t working! Luckily an attendant was on duty. I asked to buy a single ticket. Without responding, she pointed to the special entry gate. I had no idea what she meant, so I asked again, and then understood that she was letting me in for free! I have no idea why that happened, but the clock was ticking, and I was going to be late. So I thanked her and took off on the F train, which, thankfully, came quickly. Then at Broadway-Lafayette I changed to the 6 train. That too went speedily.

Once exiting at Park and 33rd Street, I had to walk the four seemingly endless blocks to First Avenue—and arrived 15 minutes late. Fearing that I had forfeited my appointment, I sped through a labyrinth of spaces guided by endless Covid vaccine signs.

My concern turned out to be unwarranted. Once I reached my destination, I was greeted by two organized staffers who directed me and a constant flow of others to computer screens where we signed in and joined a quickly-moving line to enter the vaccination room. Every step was smooth, seamless, and professional. Between registration, vaccination and a post-shot observation, the total time elapsed was not more than 25 minutes. In that period, I witnessed no fewer than 80 people receive the vaccine. And they kept coming long after I left. An incredible display of efficient organization.

The experience was a genuine “feels good to be in America” moment, something I rarely felt in the previous several years.

During the leisurely trip back downtown, jet lag set in, unsteadying my pace and reminding me that not even 24 hours had passed since our return to New York. Whatever doubts I might have had about re-entry vanished. The surprise vaccination was a perfect welcome. –Maddine Insalaco, NYCitywoman contributor

The photos on the home page for this story were taken at NYU Langone by Michael Appleton/Mayoral Photography Office. 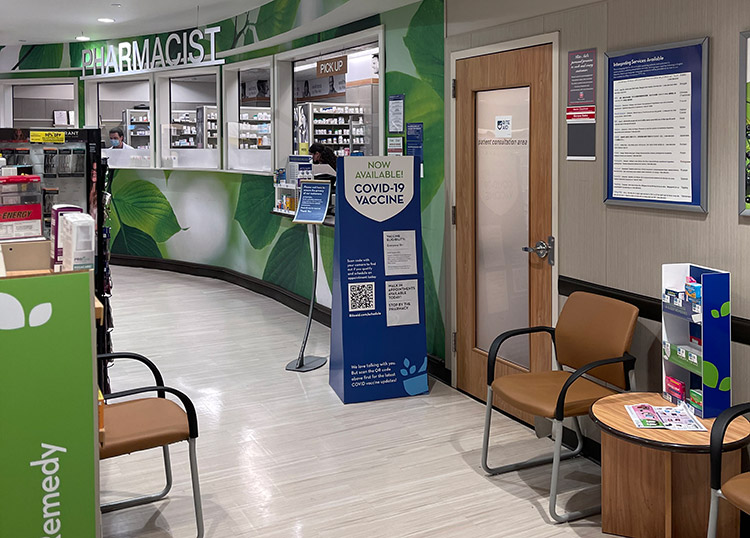 BEST BIRTHDAY PRESENT EVER
No matter how frequently I tried at the outset, in early January, I couldn’t get a vaccination appointment. Even my attempts at sites up near the Canadian border failed utterly. Then near the end of the month, a friend in the West Village phoned to say she’d heard her local Rite Aid had the Covid vaccine, prompting her to run over there shortly before closing time and see about going onto the waiting list. No need, they told her. They had extra doses, due to cancellations on that freezing day, and before she knew it she had her shot.

The next day was also freezing. A good omen, I figured. So I took the M8 crosstown bus from the East Village, arrived at the Rite Aid an hour before closing time and modestly requested to go onto the waiting list. Those were the magic words. Within minutes I too was vaccinated. What struck me wasn’t only the immense joy I felt as the needle exited my arm, but the look of happy pride in the eyes of the young nurse administering the shot.

Onto the so-called observation area—only no one was observing us. To my amazement, I was the only vaccine’e. The others sitting there were just waiting for prescriptions to be filled. Did I mention it was my birthday, and that was the best birthday present ever? –Linda Dyett, NYCitywoman contributor

Also see The Story of My Covid Vaccination by Susan Shafer.