Stitching History From the Holocaust

How the discovery of a pack of dress designs in a basement in Milwaukee is keeping the spirit of Hedy and Paul Strnad alive. 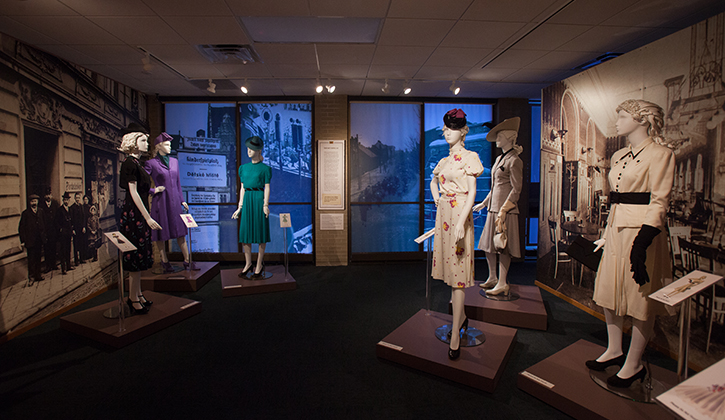 Photo from the traveling exhibit. Below, Hedy and Paul Strnad. 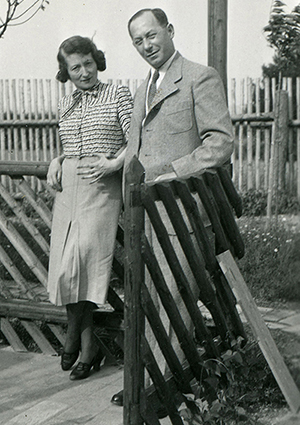 It’s the stuff of fiction—a Milwaukee man cleans out his mother’s basement, discovers an old, unlabeled box, and inside finds an envelope sealed with red wax, stamped with a swastika, and marked “Inspected by the German Reich.”

But this isn’t fiction; it’s the true story of a Prague couple in the 1930’s—a 43 year-old bank clerk and his 39-year old wife, a dress designer—and the tragically unsuccessful efforts to save them from the Nazis. It’s also about the spark of life that lived on in the wife’s dress designs after the couple’s deaths.

Inside the swastika-stamped envelope was a letter written by Paul Strnad, a bank clerk in Prague, to his American cousin, Alvin Strnad, in Milwaukee. It was postmarked Dec. 11, 1939, nine months after German forces occupied Czechoslovakia: “You may imagine that we have a great interest of leaving Europe as soon as possible…By separate mail I have sent you some dress designs my wife [Hedwig] made. I hope the dress manufacturer you mentioned in your [previous] letter will like them.”

In Paul’s earlier letter dated Oct. 24, 1938, he had written to Alvin about the “catastrophe that has upset our whole life”—the Munich Pact allowing Germany to annex part of Czechoslovakia. “Even now strong anti-Semitic tendencies are making themselves felt,” he wrote, “such tendencies as never even existed before in this country.” 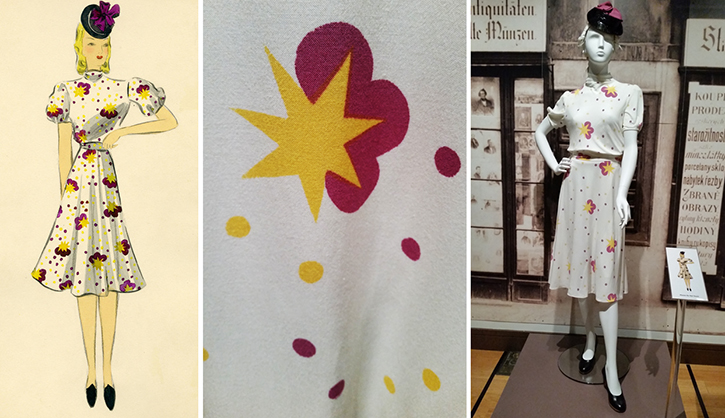 The Strnad’s had to leave Prague quickly and Paul hoped that Hedwig’s designs would be their ticket.

He asked Alvin for help in obtaining “a so-called affidavit from an American citizen” that would allow the couple to immigrate to the United States, where his wife—known as Hedy—might find work as a dressmaker. “For the last 17 years (she) has been running, as proprietress, a first class dressmaking establishment,” Paul wrote. “…(she) enjoys a very good reputation here in Prague, as she is very diligent, has a first class knowledge of her line and has very good taste.” 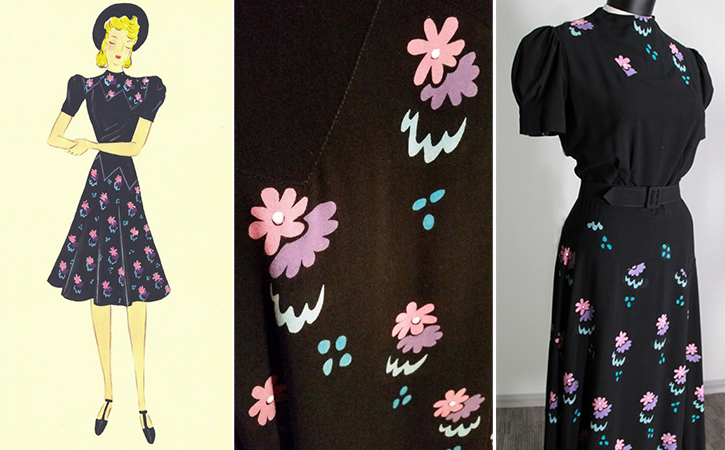 But despite Hedy’s talent and Paul’s perseverance, Alvin was unable to get the couple out of Prague. They were sent to Theresienstadt, a holding center for Jews, and then transported to the Warsaw Ghetto, their last known address, where they either starved to death or were sent to a killing camp.

The story might have ended there, just one more chapter among millions of other heart-breaking vignettes from the Holocaust, if Burton Strnad, the son of the now deceased Alvin, had not opened that old, unlabeled box. Instead, thousands of people are now learning about the Strnads as they view Hedy’s dress designs in a traveling exhibition organized by the Jewish Museum of Milwaukee. It until recently was on view at the Museum of Jewish Heritage in lower Manhattan. 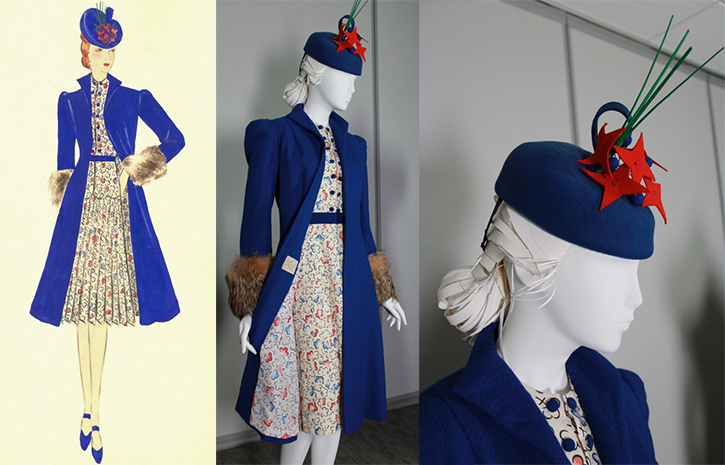 Burton Strnad donated the letter he found, along with Hedy’s designs, to the Milwaukee Jewish Archives that organized the Jewish Museum of Milwaukee, which opened in 2008 and displayed the letters and dress designs as its centerpiece. When a visitor suggested making dresses from Hedy’s eight existing designs, a five-year project began that historians, seamstresses, and researchers describe as a labor of love.

“It was the most meaningful project I’ve ever worked on, and the most important,” said Alexander B. Tecoma, senior draper at the Milwaukee Repertory Theater, whose costume shop made the dresses with painstaking attention to historical detail. Alex and Jessica Jaeger, a draper’s assistant who co-led the project, used techniques and natural fabrics—wool, silk and the natural synthetics rayon and acetate—that were used in the 1930’s, taking “absolutely no short cuts” in the quest for authenticity. The zippers are largely vintage side zippers from the late 1940’s. The vintage buttons are covered. They even cut a grey suit on the bias, a hunch that was later proven right when Alex saw a woman’s suit cut on the bias in a 1940’s Hitchcock film. 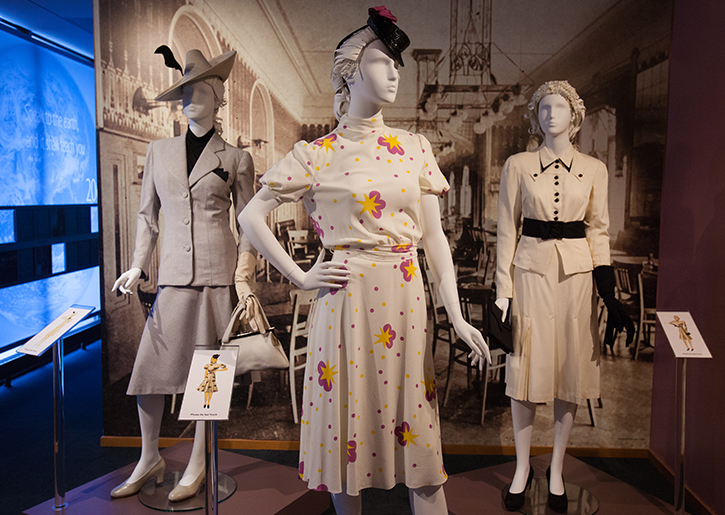 “We had no designer to communicate with, so everything was a guessing game,” he said. For example, the design for a grey organza evening gown had no seam lines. But “to get that shape you have to put seam lines in and figure out where the gores are going,” he said. Then he figured it out: the concept was like “an old Gingers Rogers dress” he told Jessica.

What to do about back views, since the designs were lacking them? Did the pin tucks on a teal dress continue along the back of the bodice? Jessica decided they did, and she made the dress that way. There was “no indication for bust shaping” on the dress, Alex said, so he hid bust darts within tucks of the bodice.

When a visitor walks into the exhibit the results are breathtaking. Mannequins are outfitted in the dresses along with vintage shoes and other accessories. There is a modern feel to the designs, even if today’s women wear pants most of the time.

“She is not of her time,” Alex said of Hedy Strnad. “A lot of the prints have a surrealist feel. She’s on the cutting edge.”

He added, “The most surprising thing was how cheery and optimistic the designs were for the time period.”

Learning Hedwig Strnad’s name—her husband referred to her only as “my wife”—was a mystery that researchers at The Jewish Museum Milwaukee solved by looking for Paul Strnad in the Yad Vashem database. Once they learned Hedwig went by the nickname “Hedy,” labels saying “Hedy original” were sewn into every dress.