For a seasoned photojournalist, retina detachment surgery led to new insights into how we view the world 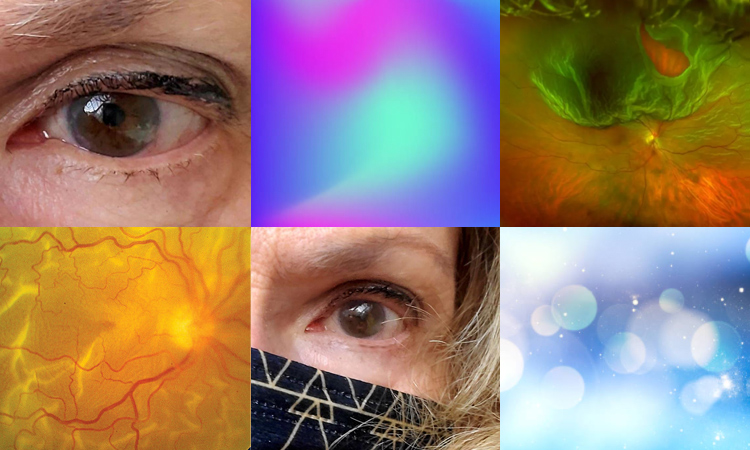 NYCitywoman starts the new year with two probing articles about vision—what and how we see. After you’ve read this one—about the phantasmagorical sights filling the eye after retina detachment surgery—we urge you to move on to its companion piece, in which a plein air painter trains her eyes to capture the Tuscan landscape’s changing light and the shifting weather. Though very different from each other, the two compliment each other and show how uniquely we all view the world.

Our eyes are a wonder, a source of poetry. But inside our bodies, they are literal, not metaphorical. They weep and itch, redden and swell; they weaken with age. Our lifelong instinct, our duty, is to protect them—and we do. Think how we cringe when the ophthalmologist shines a high beam into our dilated pupils.

Gazing at intense light with our naked eyes feels wrong—like staring at the sun. But that’s what we’re told to do during an eye exam.

It’s also counter-intuitive to allow someone to poke a sharp instrument through our eyeballs—like in a horror film. But just as the light helps the doctor evaluate the eye’s health, so a needle inserted through the sclera (the eye’s white coating) enables a surgeon to save our vision.

The needle is used during the procedure to reattach a detached retina—which I had. It’s easy to deal with an eye poke when the alternative is blindness.

And what is a retina? It’s the light-sensitive layer of tissue at the back of the eye that allows us to see.

The most common symptoms of retinal detachment are flashing lights or a dark curtain of floaters that suddenly descends over the field of vision. My symptoms were more subtle. I’d been experiencing worsening vision, a sprinkle of tiny gray floaters that had lately disturbed my reading, and a spreading patch of gray light behind my closed eyelids at night in the dark. There was also an occasional arc of light that zipped from left to right across my field of vision.

I had no idea these were symptoms of a torn and detached retina.

I learned of my condition one morning during an ophthalmology exam, with a new doctor, in Midtown, to find out why my vision had gotten so bad. I told him I’d been seeing this weird light in the pitch black with my eyes closed—but only in the bottom right corner of my right eye. After studying the photos his tech had taken of the inside of my eye, and examining me with his super-beam, he explained that what I was seeing in the lower right corner of my right eye was actually happening in the upper left corner, because our brain reverses the images that arrive “upside down” on our retinas.

He said I needed surgery as quickly as possible to reattach the retina and referred me to a surgeon a mile downtown—an easy twenty-minute walk on a sunny June day. Eight hours later, I was lying on an operating table at the New York Eye and Ear Infirmary of Mount Sinai just east of Union Square for an emergency procedure lasting about an hour.

It was a comfortable and painless operation. My right eye—which had turned from brown to olive over the years—was numbed, and I was sedated but awake, feeling curious and grateful for this timely access to expert medical care. But what if I hadn’t gone for what I’d assumed was a routine eye exam that morning? What if I lived in a neighborhood without top-notch doctors, or did not have good insurance, or was on vacation somewhere remote, like a cruise, when the detachment happened? What if I were less fortunate altogether?

The answer to those what ifs is that the fluid flowing into my eye from behind the retinal tear would most likely have soon reached the macula—the eye’s vision center—and blinded me.

During my surgery, a nitrous oxide gas bubble was injected into my eye to hold the retina in place during the repair. Afterward, my excellent and caring surgeon instructed me not to take any plane flights until the bubble had dissolved, and to sleep only on my right side, never on my back.

He did not, however, tell me what visual adventures to expect.

The first two days were like looking at the world through a sloshing tank of water. The bubble was gas but looked liquid. About a week later, as it shrank, bright colors appeared when I closed my eye in the dark. A swath of vivid pink covered my upper field of vision, with vibrating stripes of purple and green underneath. A bright point of blue-violet light, like a beacon, showed up the next day under the stripes.

But beautiful as those riveting colors may sound, they had me in a panic. Was the retina detaching again? Had I accidentally slept on my left side instead of the right? Worse yet, had I slept on my back and ruined the surgery?

I called my surgeon’s office and was told to go at once to his second location in Queens, where an associate would see me. Heartsick during the expensive Uber ride, I arrived at the office and awaited the bad news.

“Colors?” the other surgeon said after briefly examining me. “Everything looks fine.”

My own surgeon was equally unworried during my next visit with him a week later. “It’s all part of the healing process,” he said. “After surgery, people see all kinds of crazy things.” The blue-violet light, he suggested, was a reflection, though he did not explain how I saw it with closed eyes.

After that I began to think a lot about eyes. How they are the seat of subjectivity, because no one else sees exactly what you do. How any negation of what you see can feel like the ultimate gaslighting. The truism that our feelings and sensations are ours alone became real for me as I lived with the distortions of the gas bubble. It took this surgery and my recovery from it to recognize that whether it’s our eye, our arm, or our heart, we experience our bodies as a one-person drama. My eye operation also taught me that we all need empathy, in order not to feel alone.

Gradually, the bubble grew smaller. The panic subsided and the fun began. I had this shape in my eye that only I could see. It was round, shiny, and transparent, and it bobbed when I walked. It was cute, it was my special bubble. I’d started my journalism career as a photographer and found myself wanting to photograph it, but of course I could not. It was inside my eye, not out in the world. I looked in the mirror and could not see it. Speaking about it was like telling someone else about a dream.

One morning two weeks post-surgery, the bubble was a complete sphere, with a discreet border. An hour later it dropped to the bottom of my field of vision, like a setting half-moon. The world looked almost as before, just a little out of focus as my vision recovered. Later that day, the bubble was the size of a nickel. By evening, it had the size and opacity of a grape. The next morning it was gone.

If, reading this, you’ve started to worry about a detached retina, don’t. Unlike cataracts, that is not a common part of the aging process. According to a peer-reviewed 2019 Medicinenet.com article—the incidence is “fairly low, affecting one in ten thousand people each year.” I wanted to share my experience because of my uncommon symptoms. It is not enough to be alert to flashing lights, but rather pay attention to any unusual light phenomenon you experience, especially when your eyes are closed.

Right now my eye feels great. There have been no more colorful surprises, which is kind of a shame. I wish now I had a record of my personal interior Kandinsky. My surgeon is pleased with my progress but explained that although nine out of ten patients recover well after surgery, sometimes there is scarring and the operation must be repeated.

In a few months, I’ll learn if I’m among the one out of ten. If so, I’ll be choosy and will hope for imagery more in line with my surreal experience—something less like Kandinsky and more like Magritte.

. . . . . . . . . . . .
Roberta Hershenson is an arts journalist whose features, profiles, and news stories have appeared in The New York Times and other publications.

See “The Art of Becoming a Landscape Painter” by Maddine Insalaco.