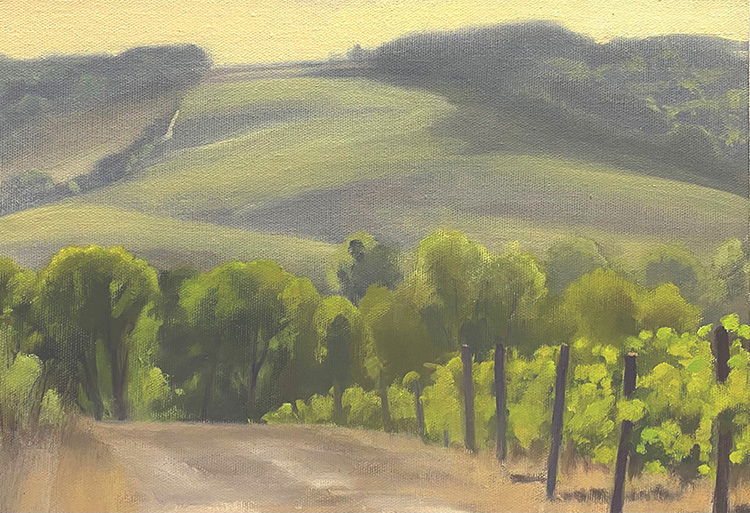 NYCitywoman starts the new year with two probing articles about vision—what and how we see. After you’ve read this one, in which a plein air painter trains her eyes to capture the Tuscan landscape’s changing light and the shifting weather, we suggest you move on to its companion piece—about the phantasmagorical sights filling the eye after retina detachment surgery. Though very different from each other, the two compliment each other and show how uniquely we all view the world.
. . . . . . . . . . . .

Every autumn, the scent of fallen leaves crackling under my feet awakens memories of childhood. Back then, my happiest moments were spent outdoors, whether running wild in neighboring yards and woods, climbing trees, or riding my bike to unknown places beyond the small radius that circumscribed my world—between home and school in Port Washington, Long Island. I loved nature in all of its forms and moods throughout the seasons and felt strongly connected to it. Signs that I would someday find myself as a landscape painter were present from the beginning.

That’s what I am today. It just took me a while to get here.

Conditioned by an upbringing in precarious financial circumstances, the big life decisions I made before my mid-thirties were driven by a need for economic security, but invariably they came into conflict with my nature. After reaching a very dead end in biology, and then studying in London and Florence, I changed my college major to international relations. That was at a time when I’d developed a passionate interest in art history, which dovetailed perfectly with my lifelong love of painting; but I did not consider pursuing either, as they were not “safe” career choices.

When it came to graduate school, once again I ignored my deeper inclinations and got a degree in international finance. But…almost simultaneously with starting my first job at a major New York bank, I enrolled in an evening oil painting class at the Art Students League. The anxiety and stress that came with the reality of corporate existence, instead of being offset by the pleasure of making art, were actually worsened as work demands regularly interfered with school and painting. Instead of recognizing the obvious, I decided that it was my job that needed changing. So I switched from the private sector to a nonprofit, taking a position as a finance officer at a United Nations agency in Rome. I reasoned that a highly paid, low-stress, 9 – 5 work situation there would make it easy for me to pursue art.

While I was ecstatic about living in Italy, I discovered that professional boredom came with a stress of its own. The dull routine of bureaucratic life became painful. I envied friends who had fulfilling jobs. With the passing years and a growing sense of the preciousness of time, I realized that I was wasting eight of my 24 hours each day. Accounting for sleeping, I was only left with eight hours daily to make my life meaningful! This became unacceptable. I started getting more serious about painting and enrolled in an Italian art school at night. The hope was to get a credential and work portfolio, and then apply for a serious art program back in the U.S.

I spent a decade in this duel existence, under the constant spell of the “dolce vita,” from which it seemed impossible to break free. During this interregnum, I passed a lot of time in Italian landscapes and started painting them. These were joyous experiences which deepened my attachment to Italy. When I finally did summon the courage to leave my job, embrace the unknown, and pursue an MFA in New York, a fantasy scheme helped me decide. That was to return to Italy after graduation and teach landscape painting in Tuscany at a friend’s farm which offered room and board to guests. I was also encouraged by having a lot of support from friends and family, who heartily endorsed this change and all the associated risks.

Today, more than 25 years later, that transitional moment is remote, while my career as a landscape painter and instructor is an established reality—and I could not be happier. Since 1995 I have divided my life between homes in New York City and Italy, where I organize and teach plein air painting workshops with my American artist husband. 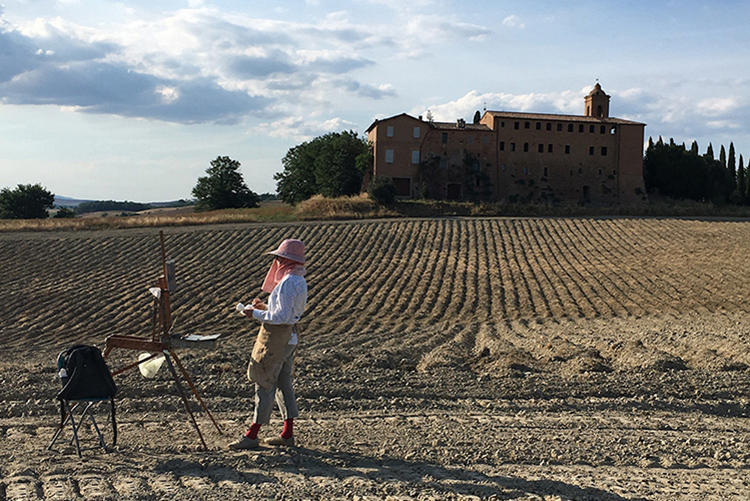 Plein air, or “open air,” painting, as the name suggests, means simply that: painting outdoors in nature, directly from the motif. It differs from other kinds of painting in fundamental ways and requires a technical approach of its own.

Unlike studio painting, the artist in the landscape controls little other than the materials at hand: oil paints, brushes, surfaces, easels, etc. Everything else is subject to extreme variation. The light is fugitive and constantly changing, even on a sunny day, the weather unpredictable and always shifting. Even the chosen subject cannot be relied upon to remain in the state that seduced the painter in the first place. A beautiful field of red can disappear overnight under a farmer’s plough. A storm can blow the yellow leaves off the grape vines. The view can even be appropriated by my fellow humans pursuing activities of their own within the landscape. What all this means is that the plein air painter must work quickly to capture those moments of inspiration. The process is more physical than intellectual and characterized by constant movement. Technically this requires a palette of few colors, mixed and applied in wet layers on small surfaces, which historically were paper.

Another major difference between plein air and studio painting is that outdoors, the painter is IN the motif, not in a disinterested position in front of it, as would be the case inside, and therefore is physically subject to the panoply of uncontrollable events that occur in nature. All of one’s senses become engaged, not just vision: smelling the fragrances; hearing the sounds of wildlife; feeling temperature, weather, terrain underfoot; tasting fruits and plants. A state of heightened awareness results, increasing the sense of connection to the world. Immersed in the surrounding space, one becomes part of the subject, continuous with it, indistinguishable from it.

In this rarified condition, there is a sense of balance and harmony that provokes elevated thought and deeper emotions. It is a profoundly satisfying, life-enhancing experience. I find this the most compelling aspect of plein air painting. All of the challenges and inconveniences of the practice become trivial in comparison. After a session painting outdoors, I feel calm, grounded, and—if pleased with my work—happy. 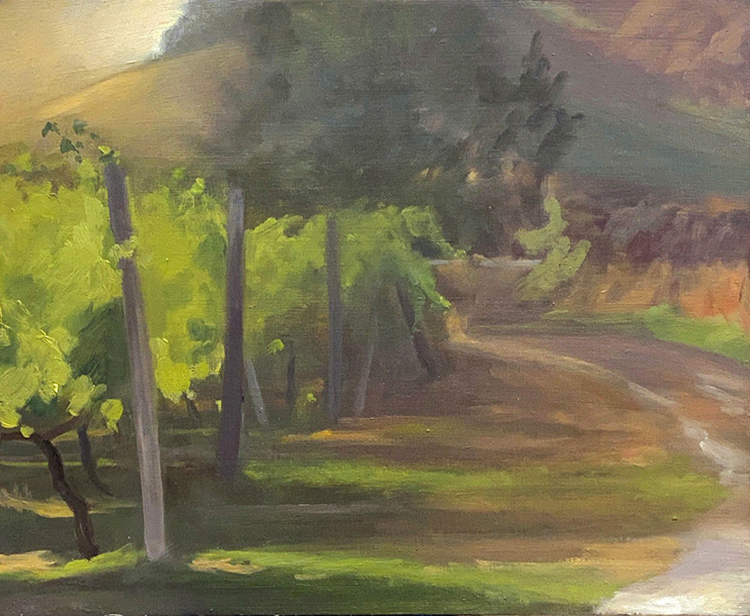 The subjects of my interest in the landscape and working methods change constantly. In the early years, I was most concerned with the development of technique and drew my inspiration from the early school of open air painting that originated and matured in Italy between the 17th and early 19th centuries. Modelling myself on the approach of neoclassical artists like Valenciennes and Corot, I sought to create works very quickly that depicted spaces with unified light and air at specific times of the day. These paintings were loose and sketchy, distillations of vast and complex environments. Nevertheless, they were faithful reproductions, grounded in observation. In a later moment, I obsessed over topographical accuracy on a small scale, producing miniature paintings of landscapes with long views. In each of these long-term works, I recorded every swell and dip of the earth, field, copse, and building, conscious that with each detail I was in some way staking a claim to the beautiful view before me. Taking ownership of it when my economic circumstances would deny it. Typically, once I play out an idea, I seek something else. There’s always the demand to raise the bar, improve the quality, maintain a deeper interest, and take the risk to get there.

Each year when I return to Italy, I see something new in the familiar landscape that inspires me. With experience, I understood that this has nothing to do with missing it before, rather, it’s just that I was not ready to see it yet. More and more, I have come to appreciate that what I see and notice in the landscape has less to do with what is there than the reflection of myself in it.

Currently I am looking to represent fleeting and transient incidents and conditions in the landscape. Clouds of dust rising against dark forests or scattering the last rays of light. The unbearable heat of a summer afternoon. Trees in dark silhouette with tops aflame from the setting sun.

I did not consciously plan this body of work. The idea occurred somewhat randomly as I was driving along the dirt roads near home and was unexpectedly seized by the beauty of dramatic events, destined to fade in moments. Depicting such instances would be technically challenging, but the short time available to translate them into paint meant that there would be a greater opportunity for creative interpretation.

Eventually I admitted the strong possibility that this choice was less accidental than I thought.

Lately, I have been preoccupied with transition and its cost. This is normal after a certain age, but the changes wrought by the Covid pandemic have made these feelings more acute. As time races toward an uncertain future, I often am arrested by a sense of premature loss. A kind of shadow cast from an unknown source. In a flash of insight, I realized that painting the evanescent freezes the moment and forestalls the loss. An antidote to impermanence. A defiance of destiny.

There is something mysterious about recognizing oneself mirrored in the landscape. Spending a lot of time in nature and establishing the connections are a necessary prelude. I felt those connections early in life when the outdoors was a theater for play. It was with age and through art that they acquired meaning. 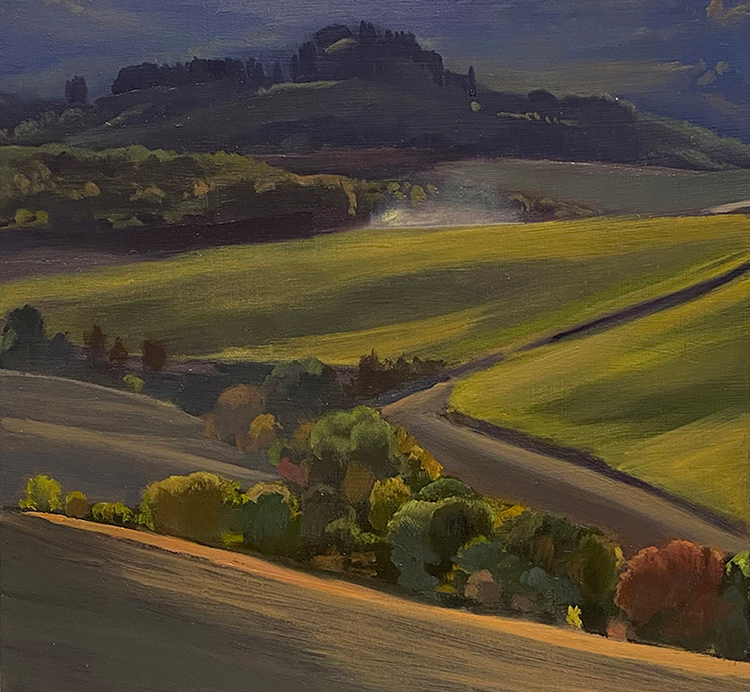 . . . . . . . . . . . .
Maddine Insalaco is a painter who divides her life between New York and Tuscany, where she organizes landscape painting workshops and gastronomic tours with her artist husband.  An authority in the field of early open air painting, she has published, lectured, and curated museum exhibitions on related subjects in the USA and Italy. Instagram: @maddine_insalaco.

See “A Jab and a Bubble in the Eye” about retina detachment surgery by Roberta Hershenson.