Facts About Faux Hair: An Expert Weighs In

Wefts, weaves, clip-ins, pieces, donuts, rats, and other extensions are everywhere these days. So should you, or shouldn’t you? 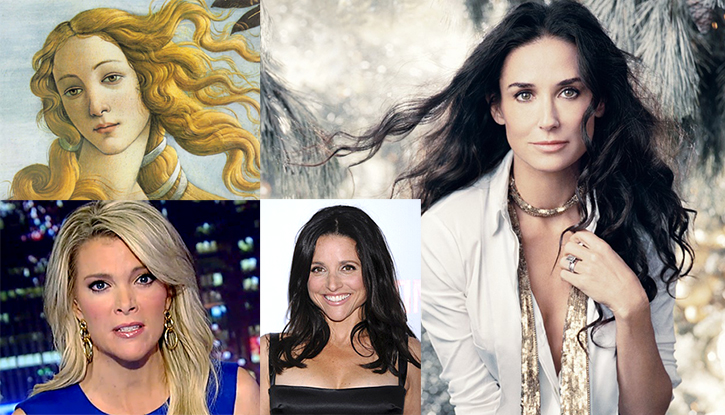 Only their hairdresser knows for sure: Botticelli’s Venus, Megyn Kelly, Julia Louis Dreyfus, and Demi Moore, all with voluminous locks.

Back in the “Mad Men” days a young woman wrote some copy for a Clairol hair color ad that was destined to become famous: “Does she…or doesn’t she? Only her hairdresser knows for sure.’’ Now that same question is being asked about faux hair. When you see Tina Fey or Julia Louis Dreyfus or Diana Ross or Barbra Streisand or Fox anchor Megyn Kelly suddenly pop up with long, luxuriant locks, you wonder, Does she…or doesn’t she? 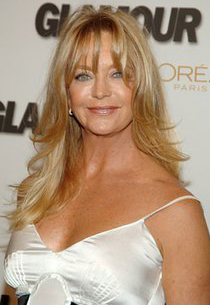 Hair extensions and wigs and hair pieces are now so common it’s possible to create a lot of fun looks, leaving observers not quite sure if your hair is the real deal or a fake. In an era when 50 is the new 35, faux hair is now treated more like an accessory—like earrings or a hat—allowing women the versatility to sport full, lustrous curls one day and a neat side-swept ponytail the next. After all, you keep your body fit and slather anti-aging creams on your face, so why ignore your hair? Since your own tresses may well be sparser than they used to be, chances are you can use the extra volume—if not the length—that younger women crave. You can, for instance, achieve a full, tousled bob, like Goldie Hawn’s, left.

Adding hair, whether at a salon or at home, automatically boosts volume, no matter if you choose bonded extensions, a weave, clip-ins, or a “piece” (as it’s known). You can add length for the diva in you—check out the Demi Moore picture—or to polish a look for a special occasion.

While some women save extensions for black-tie events, others consider them essentials. Chris Rock’s Good Hair documentary tells of a woman who wouldn’t pay her mortgage if that meant she couldn’t get her weave done. “No damage occurs either when extensions are added or removed by an expert,” says Moulay Yacoubi an extension guru at the Pierre Michel Salon in Manhattan. But “they can create a problem over a long period of time, as constant tugging on the hair follicles may cause permanent thinning,” warns Robert M. Bernstein, M.D., a dermatologist in midtown Manhattan who specializes in hair loss.

Then there’s the psychological downside: Some women find it unnatural to attach someone else’s hair to their head. Nor do they want to spend the high prices for hair and labor that can run in the four figures for long-term extensions that may last up to four months. But prices can be as low as $2.99 for do-it-yourself drugstore donut buns. There’s something here for everyone.

Still hesitating? Faux hair may be new to you, but it’s old hat. Since the beginning of time, women have been using fake hair of one kind or another. (See my Faux Through the Centuries timeline, on the right.)

I am an experienced stylist at the Pierre Michel Salon in Manhattan. What follows is my professional lowdown on hair extensions and pieces, so you can make the correct decision for your lifestyle during your initial consultation with the expert hairstylist you select to put in your extension. If you do this in a salon, your hairstylist will probably choose the extension for you; in most cases you’ll want 100 percent human hair that’s a good match to your own in terms of texture and color. Human hair is expensive, but well worth it. In other cases, synthetic hair might work (but keep in mind—synthetics can’t withstand heat tools).

Bonded Extensions
These skinny plaits of hair that are attached to your own locks with a keratin bonding agent are the high-tech add-ons that the buzz is all about. Designed to stay in place for about six months, they give you an enviably full head of hair that’s no problem to shampoo, color, and groom. And properly attached by a salon expert, they won’t show. When heat is applied to the keratin with a special clamp at a distance of 1/16th of an inch from the scalp, the extension firmly unites with a small pre-selected, pre-shielded section of your own hair. In a process that may take approximately four hours, multitudes of these extensions are secured onto the interior, sides, and back of your hair. During the first week, these extensions start to blend with your hair’s natural movement. Bonded extensions are removed with a glue remover in a process likely to take two to three hours. Price for extensions and attachments: $2,500 and up. The longer the hair, the higher the price. Price for removal: $500 and up. (Above: Rita Wilson and Sarah Jessica Parker both use extensions.)

Clip-Ins
But there are far less expensive short-term alternatives to bonded extensions: they are wefts sewn together at the top with a barrette-like fastener attached. Simply clip them onto your own hair to add temporary length or fullness. Your own hair, laying on top of the clip-ins, hides them from view. On the plus side, clip-ins give you a desirably full head of hair without putting stress on your tresses. And most women can put them in themselves. On the negative side, they’re gone the next day. So it’s a good idea to ask a hairstylist to prepare them and show you how to anchor them. I set them up and manage them for some of my clients. Salon time: One hour. Prices: $50 and up for a single clip-in; $400 to $500 for a head-full of salon-prepared clip-ins. I also make clip-in ponytails out of wefts for some of my clients: $350 and up. (Shown: Michelle Pfeiffer has perfect hair for clip-ins.)

Weaves
Curtains of hair sewn along a string, weaves are used mostly by women with curly, frizzy, kinky hair who have enough crimps in their own hair to hold the weave onto their scalp. First, your hair is braided tight to the scalp, corn row style. Then the weave is literally stitched along a braid with needle and heavy thread. After that, your hair is cut and styled. Dion Moore of the Angelo David Salon in Manhattan says a weave with good hair can last up to six months with proper maintenance. As your own hair grows in, you return to the salon for the weaves to be sewn closer to the scalp. Salon time: about four hours. Removal involves carefully cutting the weaves from the braids. Price: $2,500 and up. Removal price: $500. (Hair salons were overwhelmed with people requesting to have hair extensions similar to Tyra Banks, before she debut her pixie cut.)

Taped Wefts
These extensions are taped rather than bonded to the hair. A small section of your own hair, measuring the same width as the extension, is sandwiched between two taped wefts that stay put two to three months. Nikki Kearney at Pierre Michel proposes that taped wefts are for women who want to try extensions for longer than a day or two, but who are not ready for an extensive commitment. They can definitely look as good as the bonded variety. These wefts are removed with a glue remover or solvent. My advice: If you want a fuller, longer head of hair on a daily basis, invest in hair weaves rather than taped wefts. Application time: One to two hours. Removal time: One hour. Price: $1,200 and up. Removal price: $200. (Kate Middleton is rumored to use taped extensions.)

Hair Pieces
These clip-in variants will be familiar to women who came of age in the 1950’s to the ’70s. They are shaper buns, chignons, donuts, hotdogs, and ponytails that are attached to your hair with small clips and strategically placed hairpins. This is where the fun comes in. They’re great for a once-in-a-while look. And unless you choose to wear them on a daily basis, they don’t have to be a perfect match to your own tresses or of the highest quality. Some women take the do-it-yourself route and buy their buns at Ricky’s beauty supply stores located throughout New York City or they buy them on the internet for prices as low as $20. Other women rely on their hairstylist. Salon prices: $350 and up. (Audrey Hepburn made the updo famous in Breakfast at Tiffany’s.)

Marie Sigismondi, an experienced colorist at the Pierre Michel Salon in Midtown Manhattan had a long career at many top salons in NYC. Note from the editor: Marie passed away in 2020 and her friends and clients at NYCitywoman miss her terribly.

You may also be interested in Top Wig Boutiques in New York City by Rona Cherry.  And Tips from Top NYC Hair Colorist Marie Sigismondi by Linda Dyett.

A BRIEF HISTORY OF FAUX HAIR 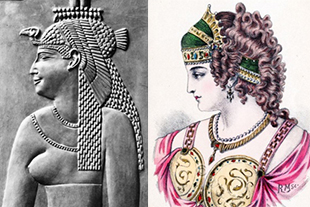 Back in 3400 B.C. the Egyptians groomed daily. Cleopatra, the original femme fatale, used kohl for eyeliner, henna to color her hair and had hair extensions to give herself a lush look (far left). Hair extensions, like other ornaments, were a way to show off your wealth. The Egyptians used weavings and knots–similar to the technique used these days for weaves.

But the Ancient Greeks preferred chignons and braids accompanied by flowers, headbands, and ribbons all sprinkled with gold powder to conjure up a blonde look (left). 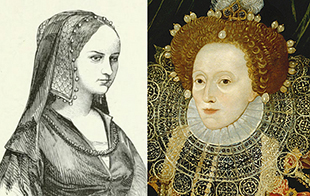 Then, during the Renaissance, women showed off their wealth wearing ornate headpieces consisting of numerous braids. They also plucked the front of their hairlines to create a higher forehead. My own theory is that hairlines were so stressed from headpieces and braids that hairlines kept receding. So women plucked them to give them a clean line. Inspired by Queen Elizabeth (far right) and her red hair they began wearing red wigs. 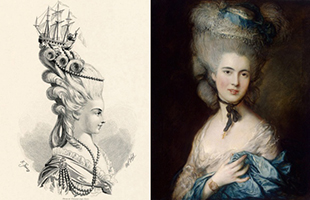 During the 18th century Marie Antoinette began a trend for poofed hair at soirees in Versailles. To show off her wealth and status the Dauphine of France wore colossal updos, using muslin to achieve an opulent effect (left). Other women achieved this look with horsehair pads or wire cages—some three feet tall and decorated with ships or menageries. Untended, these coifs attracted vermin, and as a reaction later in the century, women began wearing loose curls. 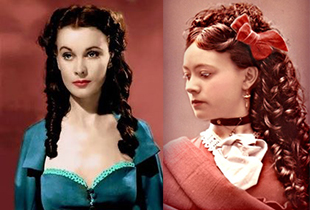 Curls remained in vogue during the Victorian era, styled with long sausage curls on the sides and a deluge of curls at the back. Vivien Leigh (right) used switches to add thickness and bounce to her curls—attached with combs—when she played Civil War vixen Scarlett O’Hara. 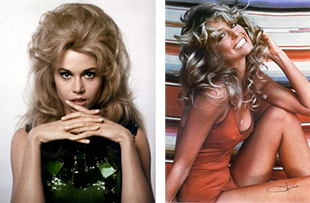 In the 1960’s, hair pieces called “falls”, along with teasing made a comeback. Here is Jane Fonda wearing a fall in Barbarella (far left).

Then came the emancipated ’70s—the Hair era–when long, natural coifs signaled social liberation. It was Anything Goes, but since feathers and wingbacks needed artifice, in 1977 Piny Benzaken, known as “The Einstein of Hair Extensions,” claimed to have invented them for Farrah Fawcett (left). 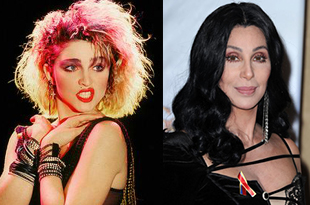 During the ’80s, Big Hair and deliberately messy Madonna coifs suited the Glamazon fashions of the day. Fake hair wasn’t needed—a lot of hairspray was (right).

The Grunge-inflected ’90s saw a return of spare and natural hair, which segued into flowing Millennial Beyonce-Kardashian locks. And extensions kept on evolving. Like Cher (far right), who has worn hair pieces and wigs forever, you can turn back time and leave your admirers Moonstruck.