A music critic takes on the future of concert venues 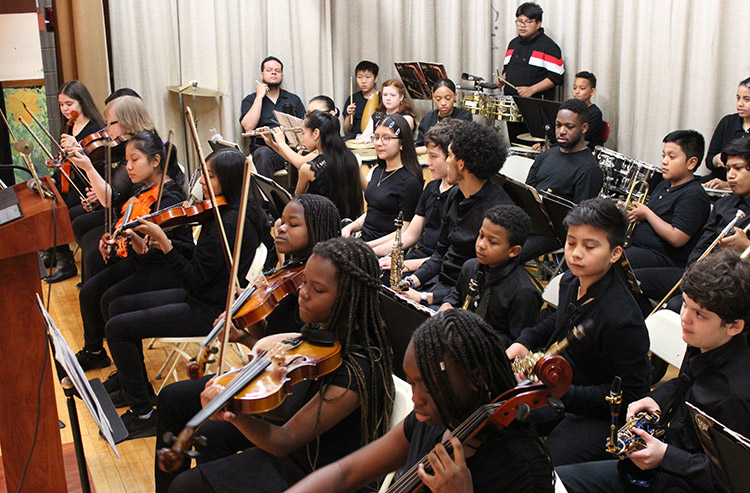 Call me Cassandra, but only on days when my concern for our orchestras has swelled to a crescendo. Cassandra, the mythological Trojan priestess whom we meet in Aeschylus’ Agamemnon, was cursed with foreseeing the truth and then uttering dire prophesies that were ignored. For her troubles, Agamemnon’s wife fatally stabbed her.

What I foresee is less freighted, though worth serious consideration by all of us who prize participating in and attending symphonies. The musician Virgil Thomson, who served as the New York Herald Tribune’s invaluable music critic from 1940–1954, wrote in The State of Music (1939), that orchestras stand at the apex of our concert life as ‘kingpin(s) of the international music industry,’ and his assessment has proved durable and true.

Several aspects of our orchestras seem of paramount concern, and they are as true of the New York Philharmonia as they are of the approximately 1,200 other orchestras nationwide—groups large and small, metropolitan or exurban, fully professional, avocational, or somewhere in between.

These issues are not necessarily self-evident to the concertgoer, but follow me into the weeds and let me explain.

Of overriding concern is our 21st century orchestras’ continuing adherence to an economic model that dates from the 18th and 19th centuries. In general, performances are attended by society’s upper strata, admissions don’t and can’t cover the costs of performance, and budgets are balanced, if at all, by a variety of charitable interests, by the court and church in an earlier day, and, in a time closer to our own, by foundation grants, corporate largesse, and individual munificence.

As we emerge from a pandemic that has caused social disruption and dislocation to an extent we still can’t measure, I expect foundations and corporations to adjust their agendas, focusing on issues that already have claimed prominence but whose urgency is now even greater. Among them are issues of woman’s equality, worldwide social justice, global health, and endemic world-wide hunger. The performing arts, which were prominent on philanthropy’s agenda just a few decades ago, will be less generously served in the decades ahead.

A classic study from the Twentieth Century Fund, Performing Arts: The Economic Dilemma, illuminated brilliantly ‘the income gap’ that is endemic to all orchestras, that is, the perennial and seemingly inevitable shortfall between earned revenue and expenses. Even with the most herculean fundraising efforts, questions will remain: With the resources at hand, how does an orchestra deal equitably with such competing interests as musicians’ fair compensation and artistic nourishment, audience desires for a largely standard repertory, and management’s responsibilities to preserve artistic and financial integrity, even as the ensemble’s horizons expand?

In the past, answers to these questions have often proved elusive; in fact, the economic model has been broken for decades. Rather than try to find fundamentally new solutions, the orchestra industry has procrastinated. But at a moment that will be decisive for the future, a new paradigm of sustenance and support must be imagined.

Here’s one perhaps possible, if partial, solution. Though already being done to a limited extent, the Philharmonic might set aside a greater number of evenings when other musical groups, and other types of music, are heard. That might bring in new audiences and new sources of support, with the establishment of satellite series. These efforts could perhaps extend to the outer boroughs (Queens College’s Colden Auditorium, in Flushing, comes to mind) or on nearby arts-aware campuses, at Princeton and Yale, for instance. How workable is this? Ultimately, maybe not workable, but it’s worth discussing. 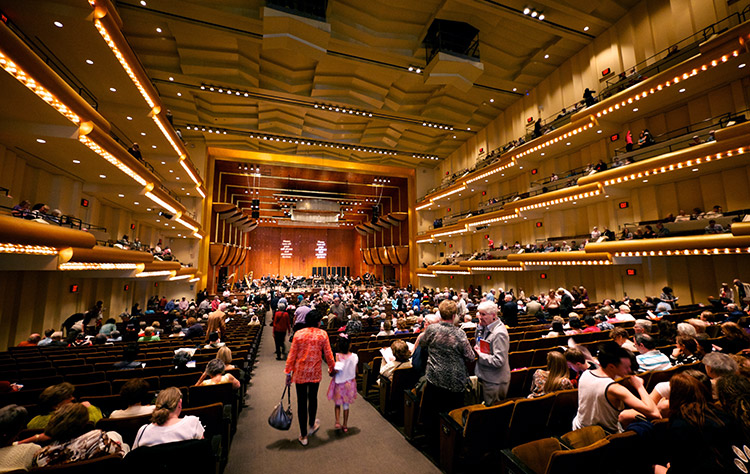 A related and equally intractable problem is presented by our concert halls. The New York Philharmonic’s home at Lincoln Center was known as Philharmonic Hall when it opened in 1962. But it was flawed—in its sound and shape, and in the experience it offered audiences—from the get-go. After extensive refurbishment, it was rechristened Avery Fisher Hall in 1973, but still proved problematic. In 2014, it was named David Geffen Hall, after the entertainment mogul and philanthropist. Now, it’s been reconceived and reconfigured at a cost in excess of $500 million. Over the past 60 years, the hall has had more face lifts, more acoustical and architectural nip and tucks, than any soul should bear.

In past years, Philharmonic Hall, and indeed most major American concert halls, copied European models, if not overtly, then in spirit. Naming one, Boston’s Symphony Hall, dating back to 1900, was modeled primarily on the Musikverein in Vienna. Often rectangular in shape, like shoeboxes, venues like these are ornate and capacious.

Symphony Hall seats upwards of 2,600, while Lincoln Center’s Philharmonic Hall held a hundred more than that. Wisely, the capacity of Geffen Hall will be reduced, accommodating 500 fewer seats than before. Renderings of the new space, scheduled to open in 2024, promise a warmth that was earlier absent, with straight lines now curved, with greater intimacy replacing an awkward formality.

This April 5, 2021 Times article indicates Geffen Hall reopening in the fall of 2022. 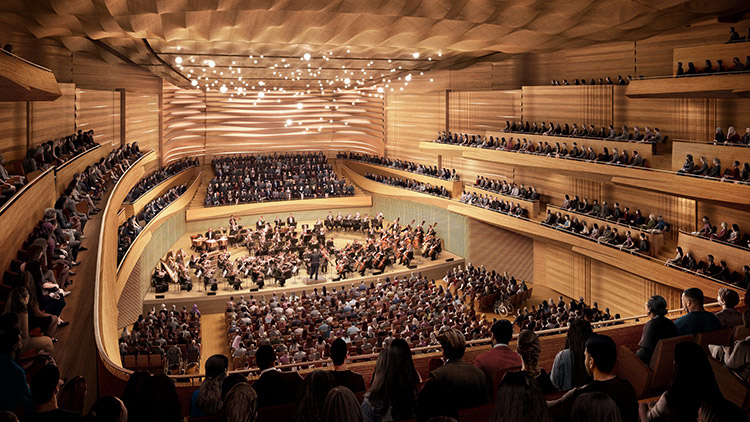 Architecture is destiny, and the challenge of filling a large hall is intense. It affects the choice of orchestra conductor and the repertory. Striking the proper balance between familiar standards and more adventurous repertory is an art.

There is ample reason to anticipate the opening of Geffen Hall. Musicians and management both seem strong, and should the orchestra sound rusty after its unwelcome absence, regular performances will quickly restore its luster.

Anticipate, as well, that the musicians, individually and collectively, will play with a newfound passion. Just as we in the audience need to share in the experience of ‘live’ performance, the musicians on stage need an audience for which to perform.

Over the past year, few moments have been as dispiriting as watching fake concerts on my computer screen at home. Here’s an example: Recently, the orchestra of La Fenice, Venice’s glorious opera house, performed Bach and Beethoven with string players masked and distanced, as was the conductor, and with wind players individually enclosed in clear plexiglass boxes. Performances were played to an empty house, and not surprisingly they were note-perfect and devoid of interest. The concert was promoted as ‘live’, but absent an audience, it was live’s opposite. When the anatomy of performance is analyzed, audience energy will be acknowledged as essential.

So forget Cassandra and call me Helenus. He was the fraternal twin of Ms. Doom and Gloom. From her, he learned the gift of prophecy. But unlike his sister’s, his visions not only proved true, but forecast brighter days ahead.

You may enjoy another story by George Gelles: