Where To From Here, New York?

Like us, our city has been sheltering in place. How and when will it recover, and will it ever be the same? Two writers consider the odds. 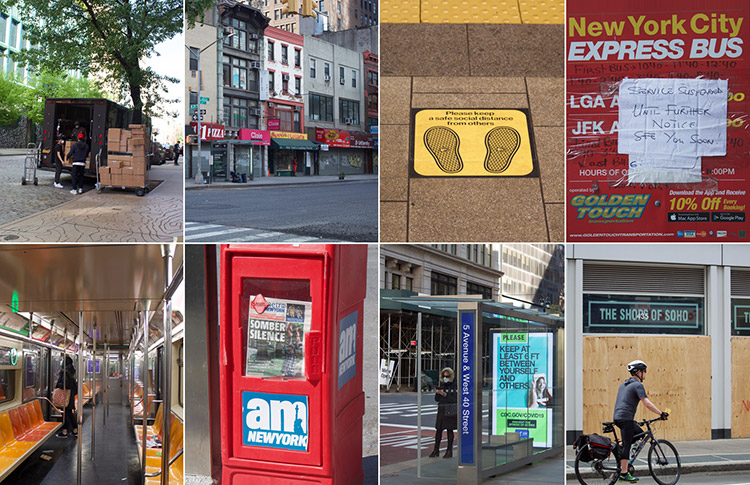 Photos, above and for George Blecher’s essay, by Pamela Drew / Flickr

After three months away from New York, my first impression was that someone had hit it in the stomach with a baseball bat. The city looked wounded, stunned. I found myself noticing the hodgepodge of buildings along Broadway—shabby and undistinguished at best—more than the few pedestrians in the streets. 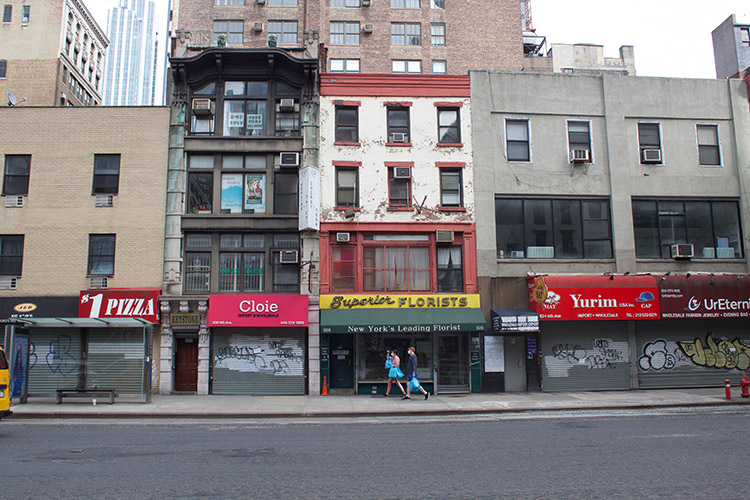 . . . . . . . . . . . .
I came back at the beginning of Phase Two, and now, a month later, my neighborhood is livelier. Maybe too lively. A week after I arrived, I had a date to meet a friend at a restaurant. There were two restaurants on the block—one jammed, the other nearly empty. We headed for the deserted one, lousy food or not. But we had to walk through the crowd at the other place. Scary. Like the scenes at Florida bars or that swimming pool in the Ozarks. Everybody was drinking, shouting at one another, on their feet; nobody wore a mask. They looked so happy, liberated, uncaged, that you couldn’t blame them; they hadn’t hung out in months. But I did blame them! They might be killing one another, and me!

I’d spent the three months upstate in a setting somewhere between suburban and rural. I had my moods—touchy, despairing—but I was never as scared as at that moment with the restaurant crowd. Except for the kind folks I was staying with and an occasional foray to the supermarket, I saw hardly anyone. The difference was that in the country, you don’t expect to see many people. You do what you need to do in relative isolation.
. . . . . . . . . . . . 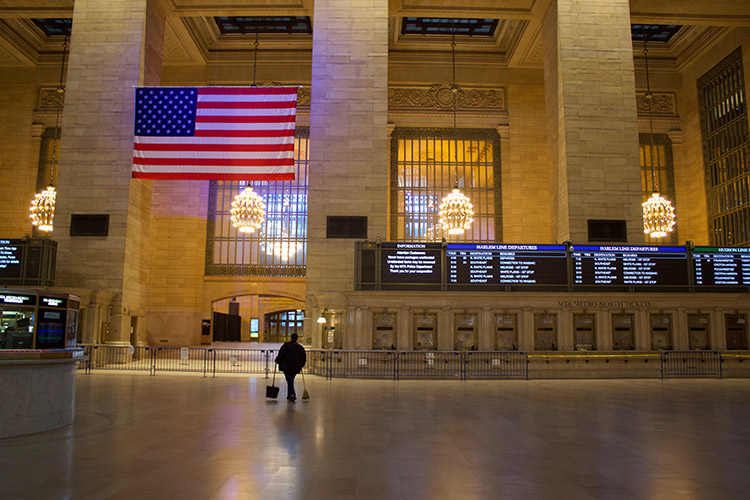 Nature got me through some rough spots. Chipmunks and squirrels chased one another incessantly, ecstatically. They couldn’t care less about my worries, which was a gift. The backyard that my window looked onto became greener, fuller, thicker during my stay until it looked about to burst. Its purity of purpose—to grow—was more than reassuring; it was undebatable.

What I notice most about being back in the city is that the simplistic dichotomy the media like to make between “privileged” and “unprivileged” is true. Usually my neighborhood tends to be fairly mixed, but these days most of the people in the streets seem to be those who have to be here. Some of the privileged are among them, but except for walks along the river many of my friends hardly venture out. They can afford to stay inside; they do their work from home. But service providers can’t. The people in the streets do not look happy. The ones who refuse to wear masks seem defiant, or suicidal—I can’t decide which. Maybe both.
. . . . . . . . . . . . 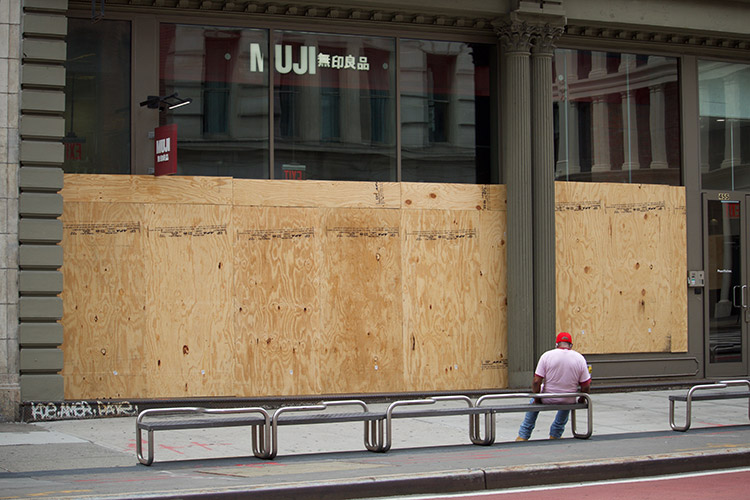 . . . . . . . . . . . .
I don’t like the city’s prognosis. The price of real estate in the northern suburbs is soaring. Anyone with school-age kids—and money—is desperately looking for a school system that can offer an actual five-day week. I’m hearing from a doctor who’s seen that the infection rate in the city is ticking upwards. The owner of the diner where I hang out tells me that there’s no way his business can survive. What is he going to do? Probably the same as the executives at Hertz and Neiman-Marcus. Declare bankruptcy, and take the money and run.

So many of the attractions that draw tourists to the city have yet to open, or will open only on a limited basis. Hotels will stay shut for a long time; who wants to travel to get here? One’s fantasies run wild—a city not just stunned, but vacated by everyone except those with nowhere to go, crime and looting in the streets—my fantasies are no different from yours. Will New York ever change back from my initial impression as stunned into what it should be—a lively swarm of city dwellers swaggering down the streets as if they owned them, exulting in the pure pleasure of gab?

George Blecher writes for the New York Times and a number of European publications about American politics and culture.

The Shakeout
By Linda Dyett 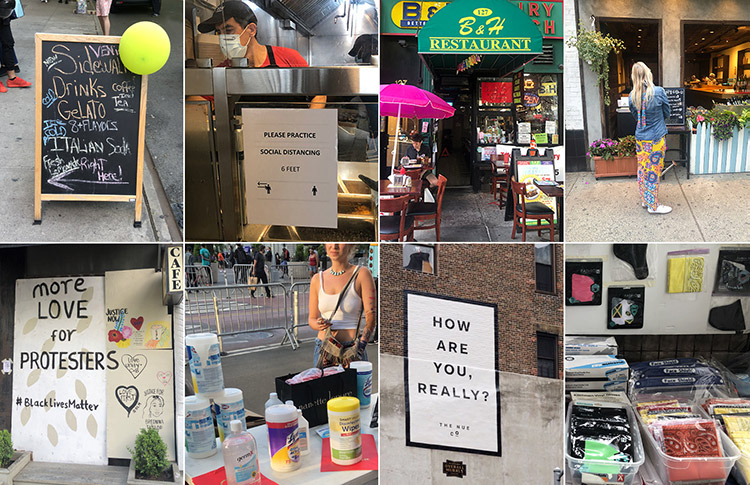 Some years back, I heard an intriguing concept: that every century has its key city—the magnetic megalopolis that calls the shots for other cities around the world. In the 18th century, the reasoning goes, that city was Paris. In the 19th, London. In the 20th, New York. Sounds about right to a native New Yorker like me.

I’ve since thought hard about this city-of-the-century idea, and even before the Covid debacle rolled in it become clear to me that my home town will no longer set the world’s pace in the 21st century. This city used to be a gritty, welcoming, can-do refuge for those on the way up and those on the way down. Then in the aftermath of the flush postwar years, we lost our industrial base. Colossal greed set in. Manhattan’s real estate market insanely rose into the multi-millions. (Quick aside: what is the future of all those grotesquely priced apartments—surely devoid of inhabitants for at least the past five months? Shouldn’t the city appropriate them?) Not to mention the many independent businesses that closed, and the print media’s death spiral. Nor to mention 9/11, the current gun violence, the soon-to-take-place evictions, the fiscal crisis we’re about to face, and, oh yes, Covid-19’s inevitable return.
. . . . . . . . . . . . 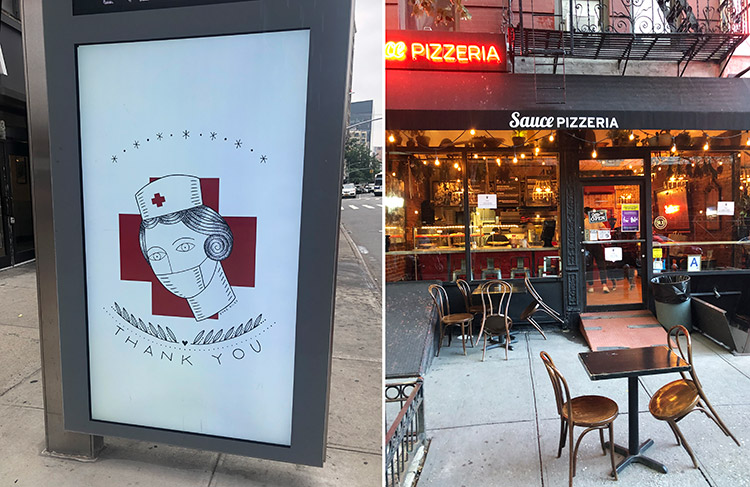 . . . . . . . . . . . .
In March, as if on cue, the getaways began. Over forty percent of the population of the Upper East and Upper West Sides escaped into exile. And even in the less auspicious East Village, my neighborhood, the streets were dotted with moving vans. Locals who once considered New York the only place to be, who were ecstatic paying through the teeth to live in cockroach-infested apartments, were so loathe to return that they hired strangers—moving men—to clear out their worldly goods.

Their fears are understandable. But their departures illuminate the worst of New York’s pre-virus maladies: the thoroughgoing inequities between the haves, who could afford to leave, and the have-nots, whether forced or determined to stay, often in cramped quarters. Those who had to hit the streets and go out to work—blacks and browns, many of them—of course constituted the majority of Covid cases.

All right. Against these sorrowful odds, I’m hopeful. Call it a rebalancing, a silver lining, a kick in the pants following the pandemic’s shakeup. Prices are scaling down. We’re spending more time in our neighborhoods, supporting the surviving local businesses. The sidewalk restaurants are thriving. The stores have reopened. Museums are poised to follow. The outer boroughs will have more clout. And minorities will play a major role throughout our reawakening city.

Okay, a smoothly functioning city will take a while. First we’ll need widespread vaccinations. So we’re realistically talking late 2021 here. But what’s a year and a half when we’ve already made our way through five months?

Our storied infrastructure will remain, preserved in aspic, so to speak. The Statue of Liberty (yeah, her); the Empire State, the Chrysler, the Flatiron, and Seagram Buildings; Macy’s (probably); the red brick high rises; the white brick high rises (pretending they’re in Miami Beach); the brownstones; the tenements with the exquisite filigree of their rusting fire escapes—they’ll attract a new generation of strivers. And as for the remain-ers, me included, most of us have no intention of climbing out on any escape route.

Let’s let Lagos (emerging as the world’s largest city), Mumbai, or Shanghai become Numero Uno, while New York acquires the patinated allure of Paris or London. That’s where I see us heading. Anyway, hasn’t our feisty city always been at its best when it’s up against the ropes? 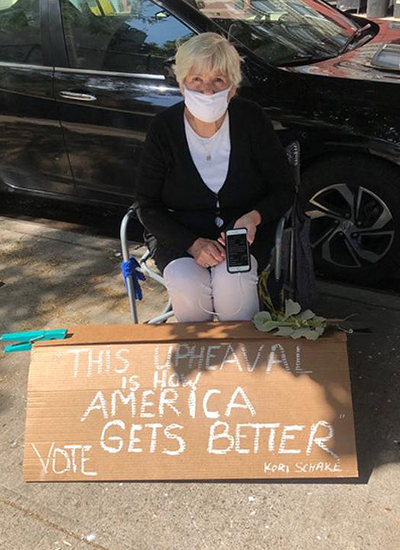 By way of a coda: One recent sunny day, I was walking along East 12th Street when I spotted a fellow senior citizen seated on a chair beneath a tree. She was holding a placard reading:

THIS UPHEAVAL IS HOW AMERICA GETS BETTER. –Kori Schake
VOTE

I stopped in my tracks to say hello and take the photo you see above. The lady, a stranger, explained that she’d been cooped up in her apartment, but it was high time to get outside and alert her fellow New Yorkers to the words on the sign. They’re from this recent Atlantic article by Kori Schake, director of Foreign and Defense Policy Studies at the American Enterprise Institute.