During the lockdown, I’ve been fortunate. My attention has been consumed—and even obsessed—with needlework. Specifically, I’ve been sewing small narrative panels—tapestries, for want of a better term. Time soars as I come up with a concept, sketch out a design, transfer it onto muslin that I’ve clamped onto a hoop, and then I embroider, embellish, bead, or appliqué the images and words in my design. The minute one tapestry is finished, I’m planning the next. No time to waste.

Over the years, I’ve had specific inspirations. While visiting the medieval Italian hill town of Orvieto a couple of decades ago, I saw Luca Signorelli’s magnificent Last Judgment fresco—displaying the likeness of a lover who had jilted the artist. By way of retribution, he painted her being carted off to hell by a very scary demon (below: detail of The Damned in Hell). 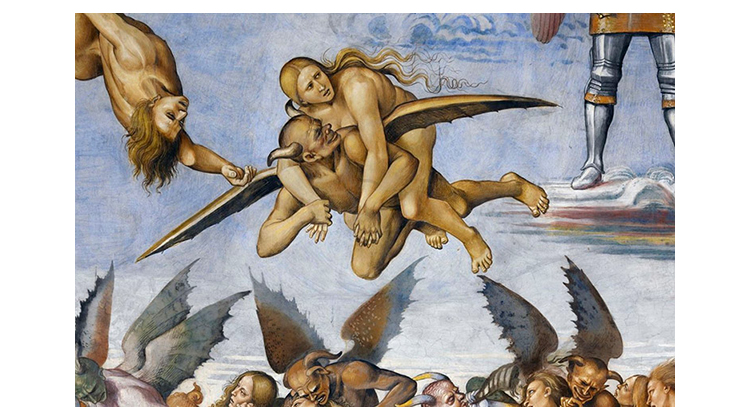 Fast forward to the 2016 election and the heart-body-mind-soul sickness that I, and millions of other Americans, suffered as a result. That was the year I came across a unique British TV mini-series, Jonathan Strange and Mr. Norell, about feuding magicians in nineteenth century England. In one scene, a young woman goes mad, and in her madness tears up her clothes and creates a spectacular tapestry with them, illustrating some of her terrifying visions. Something about that tapestry clicked for me.

Even while holding down a career writing about art and serving as book review editor of a Norfolk, Virginia, newspaper (from which I took an early retirement and moved to Connecticut), I always found the time to paint and draw, make assemblages, and dabble in a variety of crafts. I did some research on a form of needlework called narrative tapestry, and decided making one would be a pleasurable way to use my skills and distract myself from Trump-related misery.

As it happens, over the years I’d been accumulating boxes and boxes of material for just such a project. Whether at tag and estate sales or thrift stores and flea markets, I would invariably buy somebody else’s neglected embroidery thread, fabric, trim, buttons, bangles, baubles, and beads. At last, with these tapestries I found a use for them.

Then the day came when, feeling overwhelmed by the D.C. horror show, I began picturing Trump, his lackeys, and his enablers damned to some version of Dante’s inferno. My mind recalled Signorelli’s Last Judgment and that demon with the ex-girlfriend on his back. She could be Melania!

And so I began working on what turned out to be a monthslong undertaking, getting tremendous satisfaction sticking needles, voodoo-like, into the damned White House cohort, with Stephen Miller as one of the demons. The piece eventually acquired the title At Last! Judgment! (below). 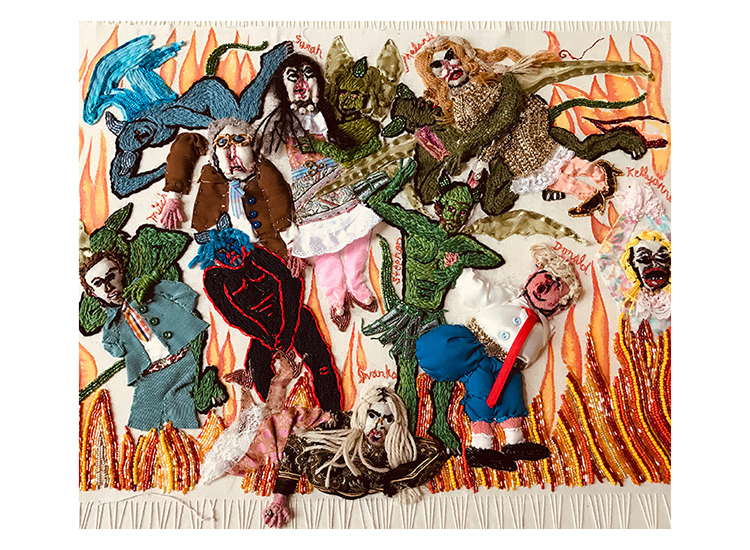 Soon afterwards, while rummaging through a pile of embroidery supplies at an estate sale, I started chatting with a fellow needleworker whose name was Priscilla. She told me about a political protest piece she was working on for a public art project that had been started by the Canadian artist Diana Weymar in 2018, in which contributors around the world embroider outrageous quotes from Donald Trump’s speeches or Tweets. That project has taken off in a major way. As many as 5,000 of these pieces are being gathered together for presentation in 2021.

The name of this project? Tiny Pricks.

Want to contribute, or at least learn more? See tinypricksproject.com 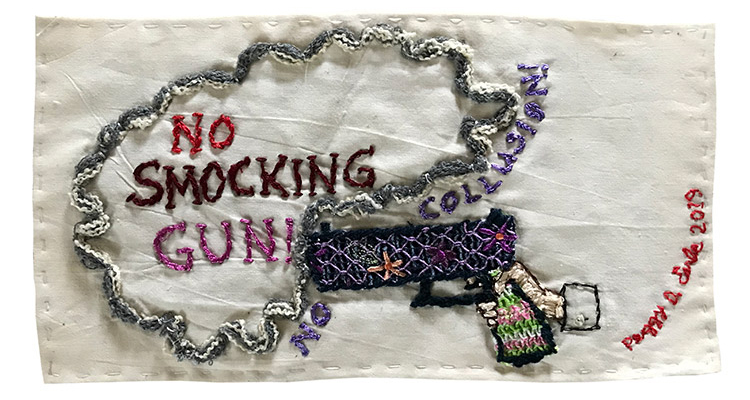 Priscilla had a look at a photo of my Judgment work-in-progress and, based on that, encouraged me to make a needlework contribution to Tiny Pricks. I came up with a small piece commemorating Trump’s memorable misspelled NO SMOCKING GUN tweet, surrounding his words by a cloud of revolver smoke (above), which, you’ll notice, is made from smocking fabric. It became the kickoff item on my Instagram post (@peggyearle8). Next, I went back to working on my large tapestries, including one about Fox News and its ilk, with the hate-mongers being tormented by monsters inspired by Hieronymous Bosch (below). 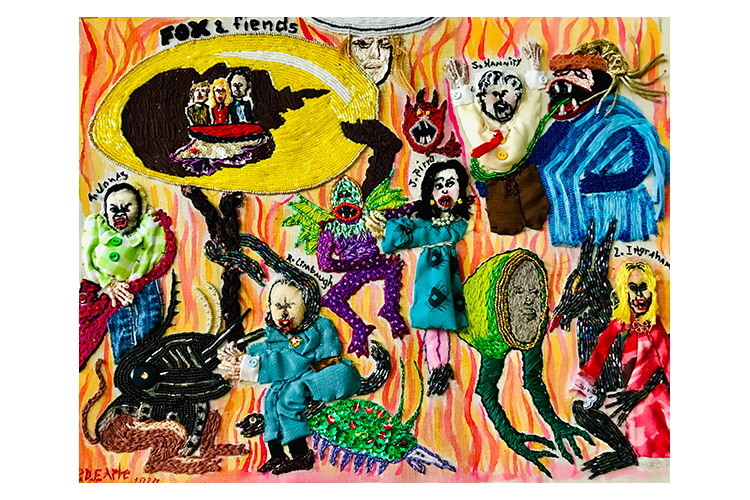 Then came the pandemic. Shortly pre-quarantine, my partner and I drove down to New York to see an installation at the Whitney by Liza Lou, an artist I greatly admire. That exhibit caught the attention of the New York Times, which on March 26th published an article about Lou and her virtual community project called Comfort Blanket, that was inspired by a patchwork quilt-cum-security blanket from her childhood. 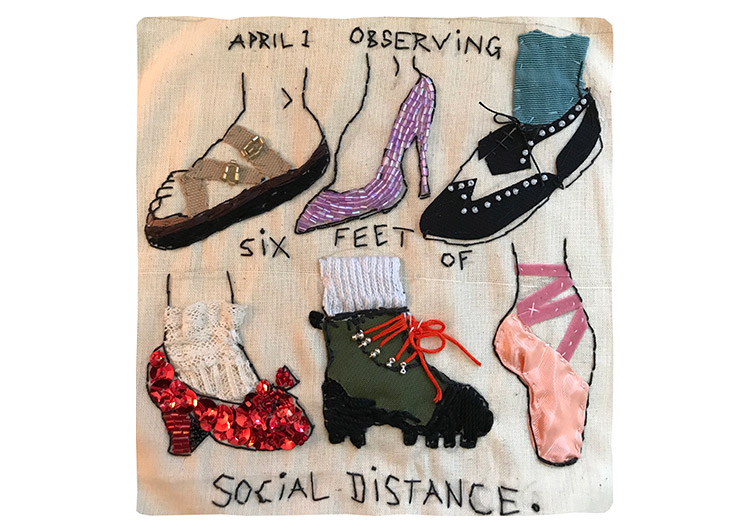 Lou requested that participants only use materials they already had in their possession, then post Instagram photos of the progress they made as they sewed their versions of comfort blankets. It was a project tailor-made for me. I dove in. I made small embroidered squares, comprising a random journal of the lockdown, with each fabric panel illustrating something I did or thought about on a particular day. After I made enough squares, I sewed them onto an old tablecloth and—voilà!—comfort blanket. (Six Feet of Social Distance, above—and a completed blanket.) 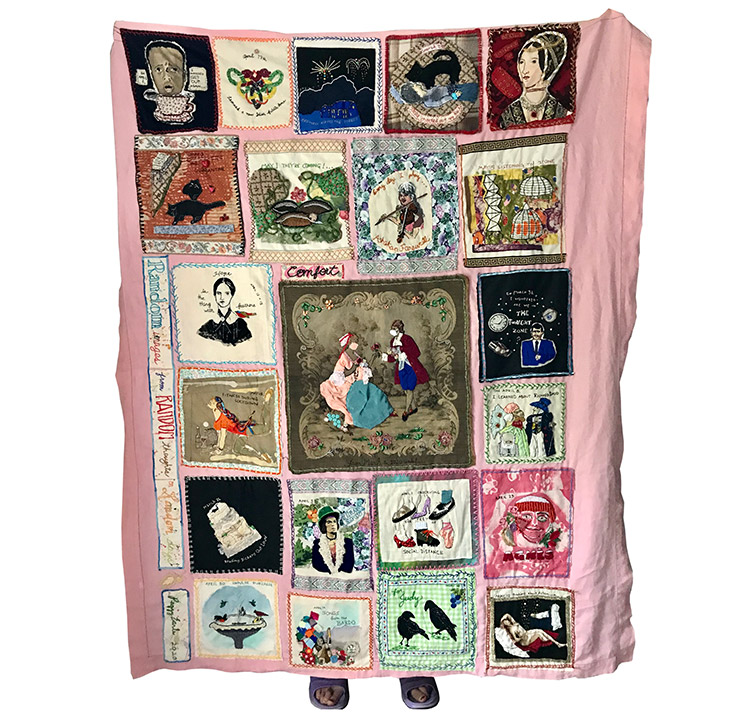 When I finished that project, I couldn’t bear the thought of not making more little tapestries, so I revisited Tiny Pricks. I’ve been on fire with it ever since, happily stabbing Trump with my needle, while getting hooked on the likes and words of praise that some of my pieces have garnered. I’m not sure where else my political embroidery will take me, but I know I’ll have plenty to work with for at least the next four and a half months. (below: Coronation and Sick and Tired). And hopefully after Tuesday, November 3rd, the focus of my attention will be able to change. 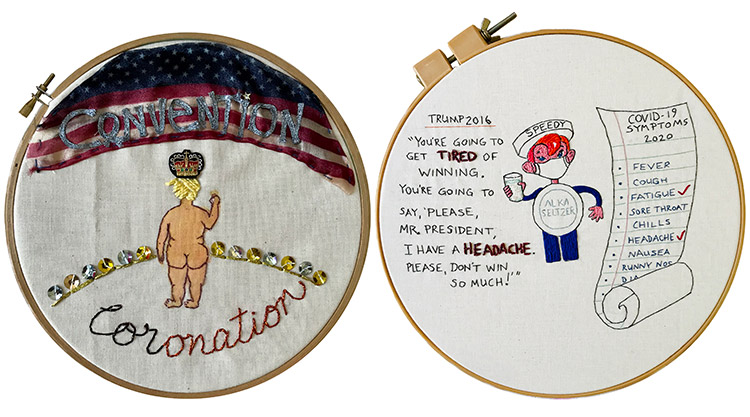 Peggy Earle is a Brooklyn, New York native and lifelong artist. She paints, makes assemblages and mosaics and has recently taken up sewing small narrative tapestries. She retired from The Virginian-Pilot newspaper in Norfolk, VA., where she was a research librarian, writer, and book review editor. She is the author of Legacy: Walter Chrysler Jr. and the Untold Story of Norfolk’s Chrysler Museum of Art.