In the funny and heartwarming documentary Cyber-Seniors, teens teach parents and grandparents the Internet. 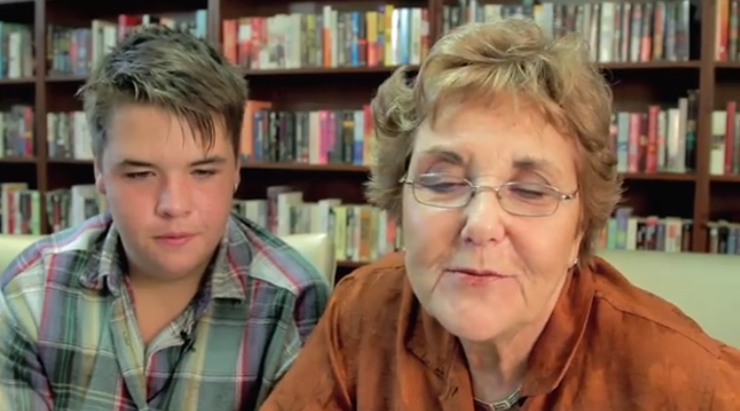 Henri and Annette on the computer in the documentary Cyber-Seniors.

After Toronto high school students Kascha and Macaulee Cassaday watched their 80-year-old grandparents master a hand-me-down computer, they decided to embark upon a community outreach project. In 2009 they enlisted other students to teach seniors at a local retirement complex how to send emails and also use Facebook, YouTube, and Skype.

As 80- and 90-year-old students were getting the hang of going online, the girls’ older sister Saffron Cassaday, a professional actress and psych major at York University in Toronto, decided to shift gears. She used her acting experiences and behind the scenes skills as editor on the TV series, “Key of Z,” to switch hats and become a director. At first, Saffron filmed the process to help support the program—but she wound up with a comedic documentary that became a full family collaborative when Mom came onboard as film producer and Dad served as a helpful sounding board.

When I first got wind of this documentary opening last May in lower Manhattan, I was not dying to see it. I thought it was going to be a dull “How to Teach Seniors the Internet.” Besides, my own mother has a full cyber-life of her own: She has been on email and the internet for years; she texts her grandchildren and “likes” my posts on Facebook. (Of course, my parents habitually blew away age stereotypes: Mom ran the NYC Marathon to celebrate her 60th birthday and Dad went bungee jumping at 85.) And what I found with Cyber-Seniors was a fun and comical film about people of all ages connecting and celebrating life.

But since I teach Internet marketing and social media, I have seen a glaring generational divide: Most of my students over 45 understand how to send and read emails, but they are bewildered by social media. They start out with fear (masked as disdain) towards Facebook and Twitter. They complain that they don’t see the point and resent this feeling of pressure to learn. 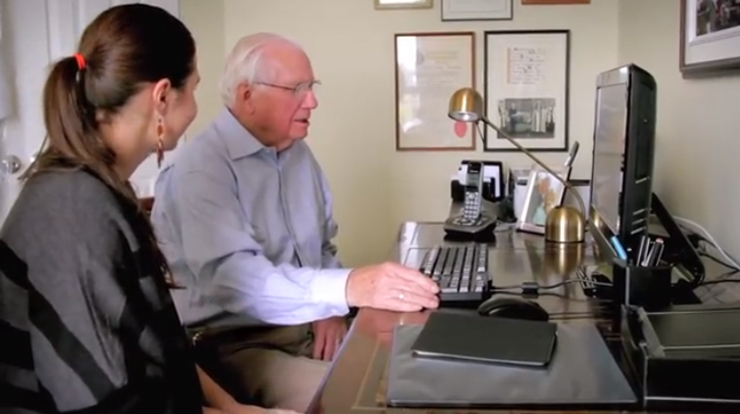 Ebert gets computer help in the documentary Cyber-Seniors.

I often hear, “I don’t have time to hear what somebody had for breakfast.” They’re oblivious to how out-of-touch that makes them sound. But, by the end of our first hour, they have at least one “aha” moment where they see the light and understand that it’s not difficult to learn social media nor is it a waste of time.

As Ruth, one of the seniors in the film, says, “There’s a huge generation gap because it’s come so fast.” Bridging that gap is what this program and documentary are all about. While watching the character-driven film I developed affection for the seniors and the teens. Eighty-eight year-old Shura stole the movie as her cooking tutorial on YouTube about how to make a grilled cheese sandwich with tinfoil and an iron inspired a video competition among the seniors. “All my kids are in their 60s, even my youngest, Tommy,” she says. “He was born in 1953 and he’s my baby.” Shura’s teen mentor, Max, asks if she’d like to spend more time talking to her kids. Shura says, “Yeah, but I can’t. They’re not around and people don’t write letters the way they used to.” Then Max takes her to Facebook and Shura squeals with delight when she sees her son’s Facebook page; Max then teaches her how to view Tommy’s posts and photos and how to converse with him.

Marion, 93, gives Shura some serious competition with her entry as a rapping granny during which she gets to brag about still having all of her teeth. Marion uses the initials O.G., which stand for “original gangster” in hip hop slang, but for her O.G. stands for “original grandma.”

The youngest senior, Annette, 77, seems the most averse to joining the world online, but even she comes around. Her lessons begin with learning how to turn a computer on and off as her tutor, Henri, handles the lessons with humor and patience. Annette is no easy student. When Henri suggests they set her up with a profile on Facebook, Annette says, “Oh, this is where you delete friends and make everybody angry?” Then she shakes her head, frowns at the screen and says, “These machines are very dangerous.” 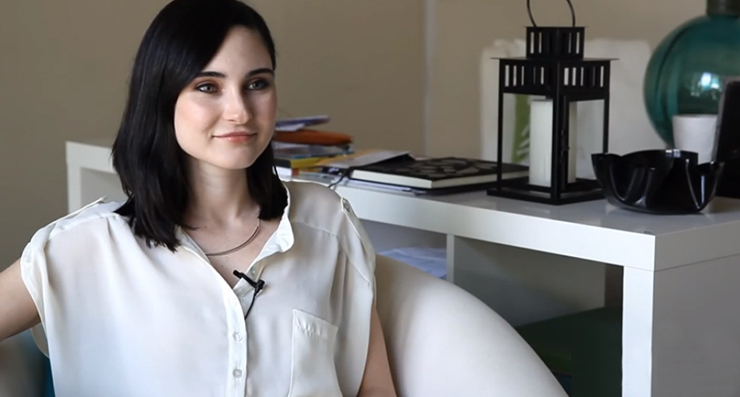 Saffron Cassaday, the director of Cyber-Seniors. Photo by FilmCourage.com.

I met the film’s director, 26-year-old Saffron Cassaday in the outdoor garden of my Chelsea building. She’s a beauty—her green eyes are striking and she’s quick to smile. The weather was cooperating except for a little wind. I asked Saffron what she thought the teens learned from the seniors. “How to be patient,” she said. “A lot of them started out their lessons saying rapid-fire, ‘Do this, do that, move your hand, push that button,’ and a lot of them are used to looking down at their phone when they’re talking, but they learned to speak clearly and slowly and make eye contact.”

As for the overwhelming editing process, I asked Saffron if she’d had any burst-into-tears moments. “There were a couple of times when I had these nervous hives break out on my body,” she said. “I had to take Benadryl to keep them at bay. And I couldn’t drink coffee to stay up because after editing 10 hours in a day, I was so wound up I had trouble sleeping at night. My mind was just racing.”

I asked Saffron if she and her sisters own the program. No,” she told me. “And AARP has a similar program called Mentor Up, which they have just launched. It’s the same thing—young people teaching seniors tech-related things. So AARP has come on board and sponsored several screenings of our film across the country, which is great because they’re using it as a tool to promote their own program, which is what we want. We want people to take it into their own hands. We’ve provided resources on our website so viewers can go out and do their own thing.”

On the Cyber-Seniors website you can download handbooks for anyone who wants to become a mentor and for any seniors who want to become participants in the program. I recommend visiting the Cyber-Seniors Corner. There you’ll find clips from the film and some of the senior’s videos from their spirited competition.

Dorri Olds is a freelance journalist and social media coach.