Our critic, a music insider, gives this film a reality check—and finds it lacking 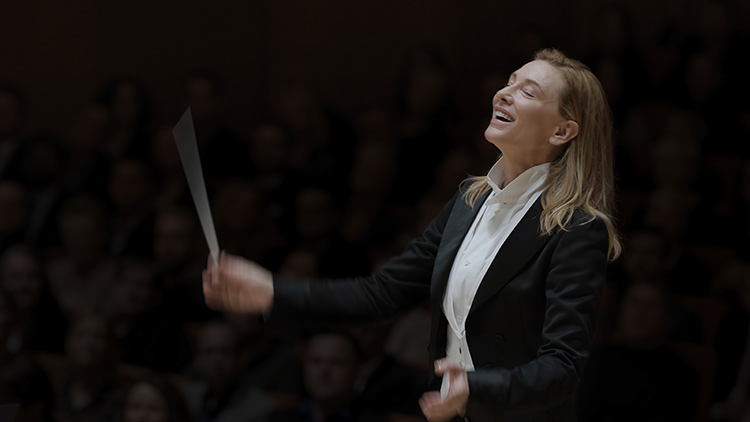 Writer-director Todd Field’s long-awaited first new film in 16 years, Tár, follows a protean composer-conductor (female and queer) as she contends with our grim new world of unforgiving social media and political correctness. Can a musical genius survive its prying gaze and self-pitying hypersensitivity?

Be forewarned. This film cares only about its protagonist, played by Cate Blanchett in a bravura performance winning widespread praise and Oscar buzz. It’s a vehicle for her. Everyone else onscreen seems like a mere footnote to Lydia Tár’s demanding and domineering talent, as she leaps from success to success in the most exalted realms of classical music. Presented to us as the first female music director of the Berlin Philharmonic, undoubtedly one of the world’s great orchestras, she is supposedly so exceptional that she’s often compared to her mentor and musical lodestar, Leonard Bernstein. All well and good. But do we believe it? Can we?

First off, can Blanchett conduct? Based on the few minutes in the film where she actually does lead an orchestra, I’d have to say no. She’s no conductor, but she has studied the craft thoroughly. She throws herself fiercely, perhaps a bit too fiercely, into a rehearsal of Mahler’s Fifth Symphony with the very capable, very game Dresden Philharmonic—and it does rather resemble a genuine orchestral rehearsal. As for the choice of Mahler’s Fifth, which is highlighted throughout the film—I found it dismaying. As Blanchett’s character accurately notes, this work has already been played to death in the cinema world. Visconti’s Death in Venice practically wallows in it, as does Tár. It gives the film an excessively sentimental cast, quite at odds with the affect of its imposing, acidic protagonist.

Tyrants at the helm: The one on the right is Arturo Toscanani. That’s Cate Blanchett on the left as Lydia Tár, rehearsing with the Dresden Philharmonic masquerading as the Berlin Philharmonic, while being carefully observed by Nina Hoss, playing the concert master—who’s also Tár’s wife. (It’s complicated.)
. . . . . . . . . . . . .

I’m an insider, having attended hundreds of such rehearsals—perhaps too many for the good of this earnest, heavily worked film. I grew up in a family of classical musicians. At home in Midtown Manhattan, my parents often entertained such famous maestros as Fritz Reiner, Pierre Monteux, and Karl Boehm. And not only did I attend many of their concerts, but I often heard them discuss music. And later, when I became an opera stage director, I collaborated with scores of conductors, some of them world-famous. But I never met anyone remotely like Lydia Tár.

Alas, the character portrayed by the magnificent Cate Blanchett is far more pretentious and offensive than any self-infatuated musician I’ve run across—and that includes the recently (and deservedly) disgraced superstars James Levine and Charles Dutoit. She seems absurdly overdrawn, a retread of the tired cliché of the great artist as a sacred monster, a predator, who terrorizes lesser mortals with her egomania. What conductor today would dare act with the omnipresent, icy arrogance of the fictional Lydia Tár?

Hardly anyone, I’m happy to say. The podiums of classical music have had enough of the infantile tyrannies of Arturo Toscanini and his ilk. The excellence of Toscanini’s performances arose despite his outrageous tantrums, not because of them. His was not the only way to make great music. Quite the contrary.

The film begins with an interview of Madame Tár by The New Yorker writer Adam Gopnik, playing himself as an adoring lapdog. She responds to his softball questions with an overbearing pretentiousness that even the most self-infatuated artist would take pains to avoid—because his or her fellow musicians would find it preposterous. (You must remember that conductors are completely dependent on an orchestra. If they prance about like self-satisfied potentates, they’re far less likely to receive its full engagement and support.)

And that’s what Ms. Blanchett does the whole way through this highly praised film; she struts, glowers, and pontificates. Lydia Tár may well be a musical genius, but she’s also an unrelenting trial. So was Richard Wagner, of course, but, lucky us, we’re spared the misery of his company. All we’re left with is his majestic music.

An autocrat at home. Tár in composing mode at her grand piano. Accompanying her is Sophie Kauer, a real-life cellist playing a cellist who could be Tár’s next predatory conquest. (As mentioned, entanglements in this film get complicated.)
. . . . . . . . . . . . .

Egregiously overlong at two hours and 38 minutes, Tár spends far too much time following someone we dearly would like to avoid, even if she’s the dazzling Cate Blanchett. Furthermore, the film has the unfortunate habit of trying to prove its authenticity with insider comments that no insider would ever be foolish enough to make.

It gives me no pleasure to say this. Todd Field, of In the Bedroom (2001) and Little Children (2006) acclaim, is clearly a talented writer-director, probing and insightful. Early on in his career, he was a jazz musician. But he also evidently knows and loves the world of classical music, as do I. He chose his German locations with skill and imagination.

Each member of the cast inhabits his or her role comfortably, with standout performances by Nina Hoss as Lydia’s ever-forgiving wife and Sophie Kauer, a brilliant young cellist-actress, who plays her instrument gorgeously. Of course, towering over them all is the film’s leading lady. While I can’t accept her character as a musical genius, I certainly celebrate Cate Blanchett as a genius actor. Thanks to her broad emotional range and unwavering concentration, Lydia Tár’s unraveling takes on epic proportions.

If only this film could deliver at that exalted level!

Ian Strasfogel is an author, opera director, and impresario who has staged over a hundred productions of opera and music theater in European and American opera houses and music festivals. His comic novel, Operaland, and his biography of his father, Ignace Strasfogel: The Rediscovery of a Musical Wunderkind, were both published in 2021.