Curators in major NYC museums resist by exhibiting works by and about Muslims and immigrants in their galleries. 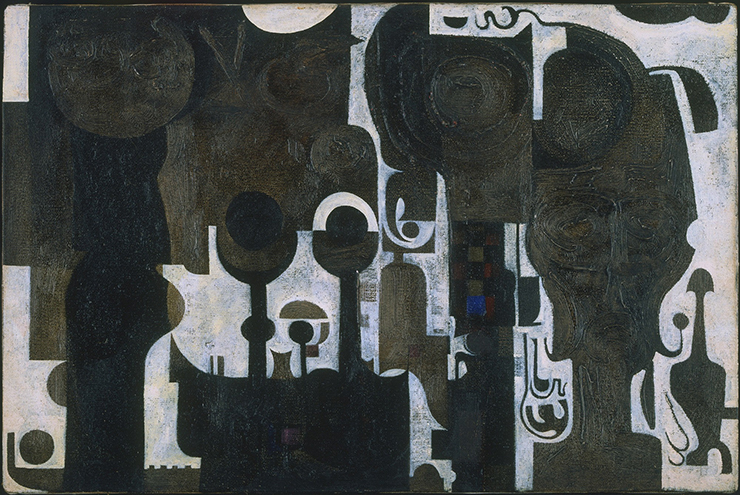 When President Trump issued his executive order to ban visitors and refugees from seven predominantly Muslim nations, protestors took to the streets and outraged lawyers headed to airports to aid stranded travelers. At museums and galleries, curators worked round-the-clock to engage in the battle against prejudice. In New York City—where there are 270,000 Muslims—the pushback has been particularly visible.

Almost immediately, the Brooklyn Museum issued a statement: “The Brooklyn Museum is a catalyst for a more connected, civic and empathetic world and we uphold the American ideals of liberty and justice for all. As such, we do not stand for discrimination of any kind. Whatever your background and beliefs, we welcome you…” The museum is hosting a series of public talks about immigrants’ rights. 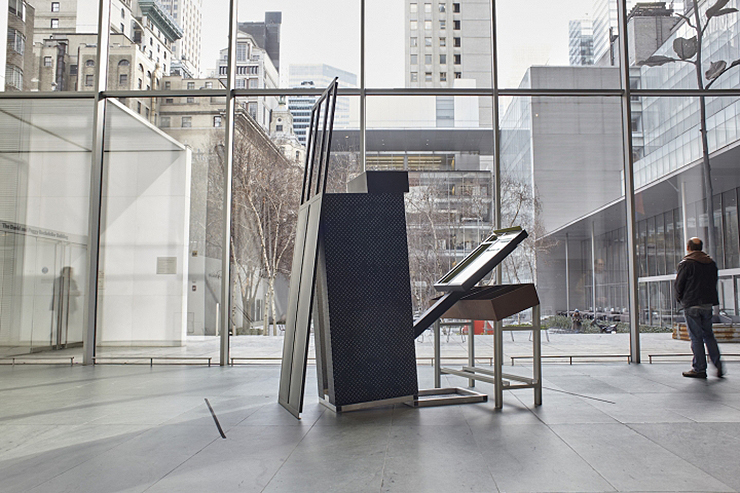 To underscore the intent, a statement accompanies each work of art: “This work is by an artist from a nation whose citizens are being denied entry into the United States, according to a presidential executive order…This is one of several artworks from the Museum’s collection that have been installed throughout the fifth-floor galleries to affirm that the ideals of welcome and freedom are as vital to this Museum as they are to the United States.” A towering sculpture of steel and aluminum by Siah Armajani (above), an American artist born in Iran, greets visitors in MoMA’s courtyard.

More artists’ works will be added in coming months, continuing the museum’s tradition of respecting the work of immigrants which dates back to its inception, when it welcomed such artists as Duchamp and Josef and Anni Albers, who fled war-torn Europe. 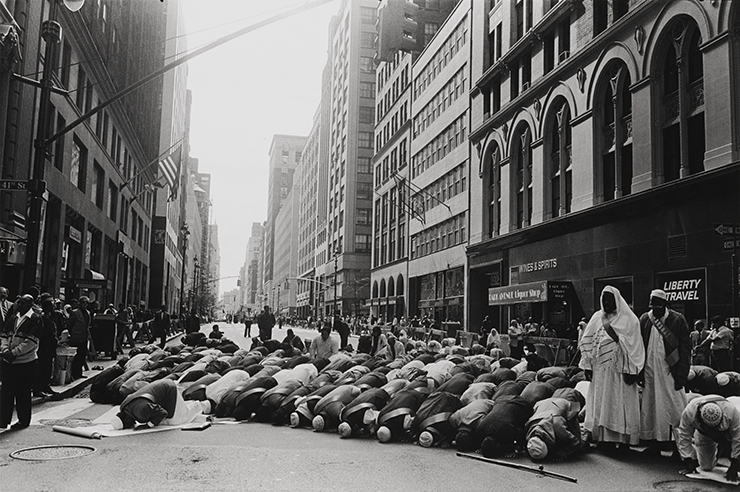 Uptown The Museum of the City of New York is continuing to explore “what makes New York New York” with a special installation “Muslim in New York: Highlights from the Photography Collection.”

The new exhibition spotlights thirty-three images, including photographs by Ed Grazda from his 1990’s project “New York Masjid” (one standout shown above: a score of Muslims praying in the streets of Manhattan before the Muslim Day Parade.) Museum director Whitney Donauser notes that the exhibit “speaks eloquently to the enormous diversity of our city and the many ways in which immigration and religious diversity have enriched and benefited New York, the quintessential city of immigrants…it comes at a time when the place of immigrants from Muslim-majority countries is being scrutinized.”

Exhibitions in the Works 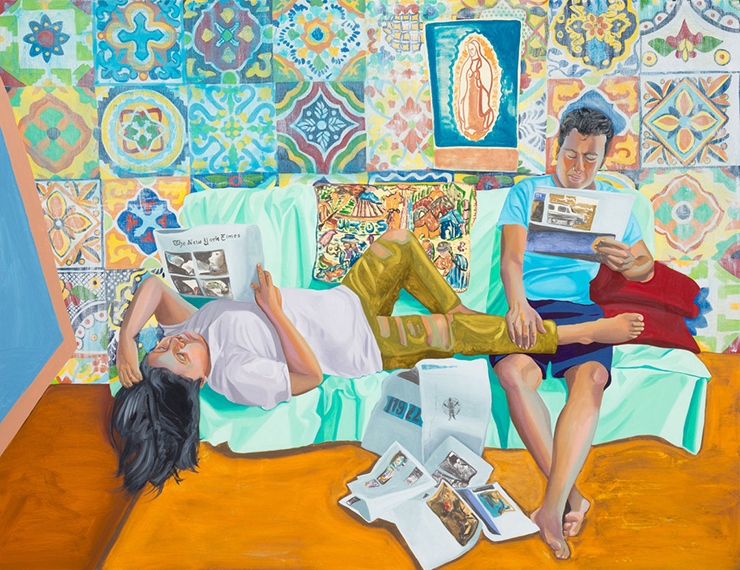 Exhibitions long on the planning boards are taking on a keener, more urgent and poignant focus on immigrant’s plights: The Whitney Museum of American Art’s Biennial (March 17 to June 11) will reflect the tumult of the times, according to the two foreign-born curators, Christopher Y. Lew and Mia Lock. A number of the sixty-three artists in the Biennial will specifically look at the lives of immigrants in the U.S. Aliza Nisenbaum, an immigrant, started painting portraits of the city’s undocumented immigrants—mostly from Mexico and Central America (above)—after teaching an English class at Immigrant Movement International.

Post Commodity Collective, a Native American performance group, will display its 2016 video installation, “A Very Long Line,” in which the camera moves along the US/Mexican border, a visual shout out against “the dehumanizing and polarizing constructs of nationalism and globalization.”

Smaller venues are also weighing in. The James Cohan Gallery is presenting a critical look at otherness in Yinka Shonibare’s, “Prejudice at Home: A Parlour, a Library and a Room” (below)—a reminder that unchecked prejudice can cripple a society (through March 18). In one installation, The British Library, 6,000 books wrapped in Dutch wax paper are embossed with the names of first- and second-generation immigrants who have contributed to British culture, ranging from Hans Holbein and Henry James to Mick Jagger. Also in the library: opponents of immigration, such as Nigel Farage. 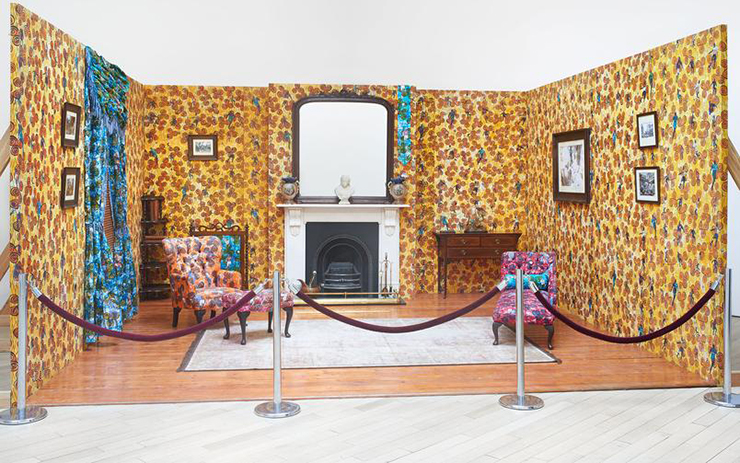 In New York Crystal Palace 1853 at the Bard Graduate Center (March 24 to July 30), scholars will examine the work of immigrants whose work was displayed at the nation’s first world’s fair. Officially known as The Exhibition of the Industry of All Nations, the fair touted America’s innovations in new technologies and culture. Caroline Hannah, associate curator, noted that “many 19th-century manufacturers in New York depended on the skills and adapted technologies of European-trained artisan migrants.” Among the new industries were cut-glass, kick-started by Joseph Stouvenal, a native of Baccarat, France, who created a machine for the process. English potters from Staffordshire adapted their skills to new soil and labor conditions and started ceramics companies.

On May 11, the Bard Graduate Center will hold a panel discussion, “Marginalized Histories of NYC,” in which scholars will explore the histories of these communities and how they have contributed to revitalizing New York while overcoming discrimination and prejudice. 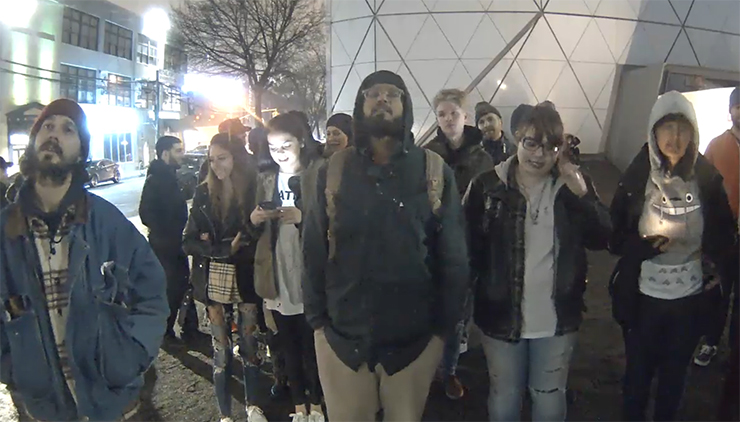 These are disruptive times, as the short-lived exhibition He Will Not Divide Us (above) at the Museum of the Moving Image in Queens reminds us. When the artist Shia LaBeouf opened his work on inauguration day, he intended the exhibit to last as long as Trump’s presidency. It didn’t: Less than three weeks later, the museum closed the exhibit noting that it “had become a flashpoint for violence” after LaBeouf had an altercation with a white supremacist. On February 18, the project relocated to a wall outside the El Rey Theater, Albuquerque.

BE PART OF HISTORY

The New York Historical Society is collecting signs, posters, banners, sashes, buttons, and flyers from the Presidential inauguration in Washington, D.C., as well as material from the January women’s marches and other nationwide protests.

To donate material, contact the curatorial team at responses@nyhistory.org. Include your contact information and the name of the event the objects are from. No phone calls, please.

Curators’ note: “Due to the high volume of donation requests, we are not able to accept all items we receive. Emails with images will be given first priority for review and consideration. No drop-offs, please.”