How to find fabulous designer fashions on a recession budget. 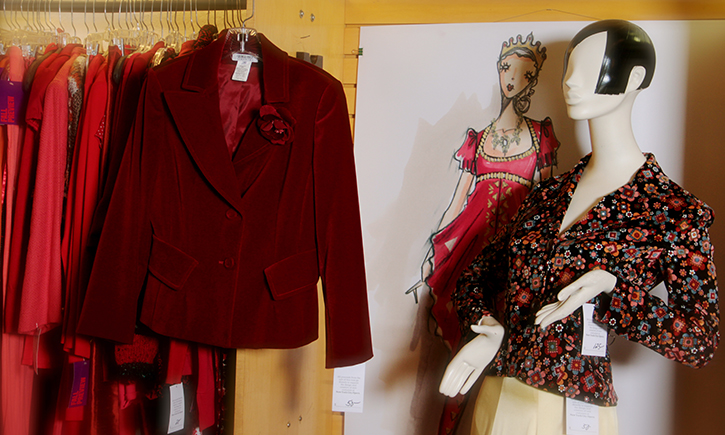 I pride myself on being a savvy shopper. During my teenage years, when I became interested in style, my mother taught me how to navigate bargain basements, tag sales, church fairs, bazaars, flea markets, and thrift shops.

The skill set came in handy when I became a fashion editor and had the privilege of shopping sample sales. Chanel was the most coveted invitation. The event was akin to speed dating. One needed a gimlet eye and steely determination to compete with top editors for the limited reserve of luxury bags, jewelry, shoes, and runway samples.

As I gradually outgrew these clothes, I recycled them at consignment shops, which in turn became for me a new frontier to shop. My big score was in Sun Valley, Idaho, where I snagged a Chado Ralph Rucci dress suit—retail price $13,200—for $750. A large savings but, nonetheless, still pricey.

Which is why when a stylish friend, whom I call “Lady Chic,” confided her recent thrift shop triumph—a L’Wren Scott sequined sweater (retail price $2,049) that she bought for $12.99 at Goodwill on 90th Street and Second Avenue—I realized it had been too long since my last thrift store forage when I scored a Chanel jacket (with the signature inner chain) in Indianapolis for $75!

Lady Chic is one of a secret sisterhood of savvy thrift chic shoppers who typically don’t share their success in finding what-to-wear treasures for fractions of the original cost. Some ladies in the sisterhood have the style gene, but can’t feed it financially. Others want a great deal that looks fabulous on them. And some are in it for the thrill of the hunt. When we visited Memorial Sloan-Kettering Thrift (1440 Third Avenue), our photographer Larissa was thrilled to find a Christian Dior sweater ($65), a Max Mara skirt ($20), and a designer leather jacket ($65).

While shopping thrift stores requires more time, patience, and style-confidence than shopping in consignment shops, the rewards of wearing a found treasure for your own exquisite enjoyment is priceless. But achieving success requires a strategy.

Thrift shops are often located in clusters, so chart your course and tackle one neighborhood at a time. Housing Works, Salvation Army, and Goodwill have stores located throughout the city. The best merchandise is typically found in those located in or near affluent neighborhoods, or in those affiliated with high profile charities such as City Opera or Memorial Sloan-Kettering Cancer Center.

Before you head out, dress to shop so you can try on clothes without undressing. Wear shoes you can kick off, and never go barefoot. Some shops are dusty, so bring hand sanitizer. Since purchases are often bagged in plastic, carry a tote to hold your loot.

Like any shop, each has its own personality. The shopping experience often starts with the window display. Some places, like Housing Works and Vintage Thrift (286 Third Avenue), feature items for auction. Others dress up windows with a thematic selection of merchandise they have in abundance. Don’t be deterred if the window display isn’t enticing. I spotted an original Louis Vuitton purse in top-notch condition hanging among less pedigreed bags at an uptown Goodwill store. 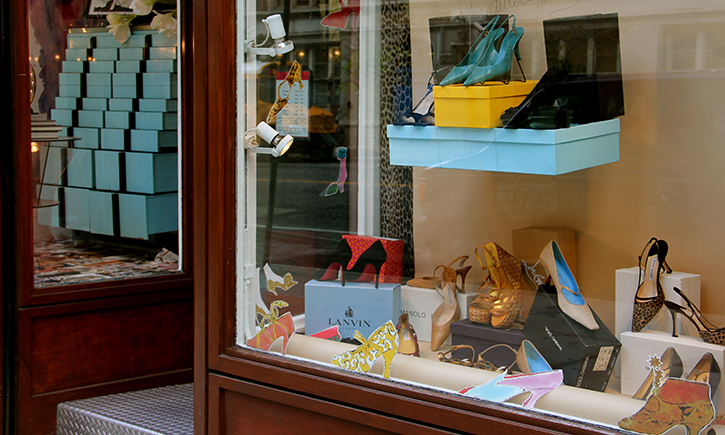 On our October outing, Larissa and I began with a visit to City Opera Thrift on 222 East 23rd Street. Its windows exhibited reproductions of Andy Warhol’s whimsical illustrations of footwear (above) to draw attention to a selection of designer shoes that ranged in price from $75 (Manolo Blahnik) to $225 (Christian Louboutin).

Later that day, we scooted uptown to the Spence-Chapin Thrift Shop (now closed) on 1473 Third Avenue (at 83rd Street). There, we chatted with Michael Javelos, an interior designer who specializes in thrift chic décor and volunteers his eye-for-quality to dress their windows. In the photo above, he and Leslie Case, an executive at Spence-Chapin Adoption Services, are preparing an arrangement of gently worn evening gowns by Lanvin, Vera Wang, and Ashley Isham ($1,000 each, about 75% off retail). Javelos wears his own fabulous thrift finds: A Turnbull & Asser shirt, Charvet tie, Bergdorf Goodman jacket, Loro Piana trousers, and John Lobb shoes. 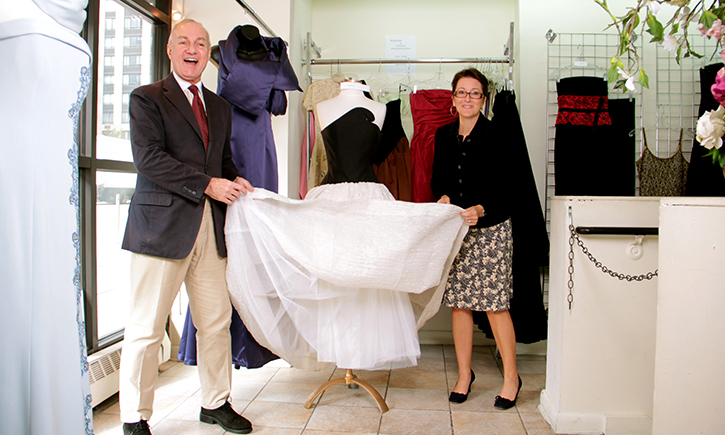 Once you enter a thrift shop, music frequently sets the mood. Opera, jazz, rock. The better ones hang clothes in color groupings, which is both attractive and easy on the eye when browsing. Go through everything at least twice—first for a look over, so you won’t feel as overwhelmed the second time around. Ignore the size on tags. They’re often mismarked. Besides, tailoring can turn a bargain into a treasure.

Unlike retail, it can be frustrating to fancy something that doesn’t fit and know you can’t order it in your size. I am still fantasizing about a size 4 perfectly tailored Yves Saint Laurent suit that was selling at Angel Street Thrift (118 West 17th Street) for $125 (below, right). Undeterred, I was delighted to find a long shearling coat (below, left) while browsing the Salvation Army Store on 208 East 23rd Street. At $24.99 it was a steal, guaranteed to keep me warm and feeling chic this winter. I was also happy to find a notable selection of large and plus-size designer clothes at Angel Street and City Opera by Valentino, Vera Wang, Dennis Basso, Bill Blass, and Calvin Klein. 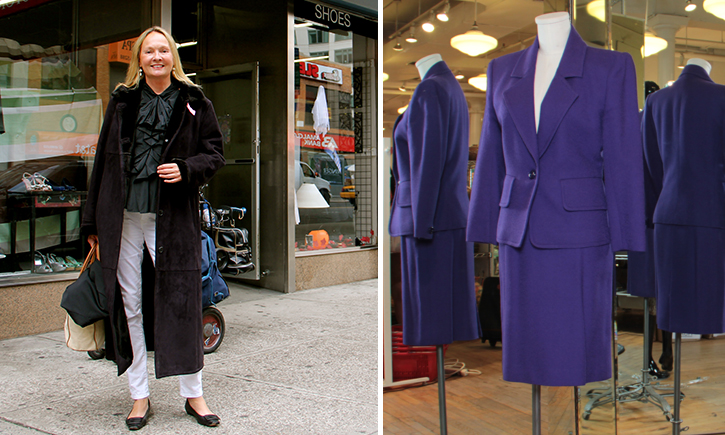 Don’t shop just for a particular item. Keep an open mind and look at everything. The unexpected find is often the most fabulous. I had hoped to find a black wool pencil skirt, which I did at City Opera (Agnes B., $20), and was surprised to find at Angel Street this $40 red cashmere Donna Karan sweater, left center, shown with a red Adolfo skirt ($75). However, the Chanel jacket (left; $1,000) and suit (right; $2,000) also on display were, I felt, still a bit of ouch for a thrift shop, but a bargain nonetheless. While thrift shops associated with tony charities discreetly discriminate in the used clothes they offer, designers often contribute never worn end-of-season samples to those affiliated with a cause they hold dear. 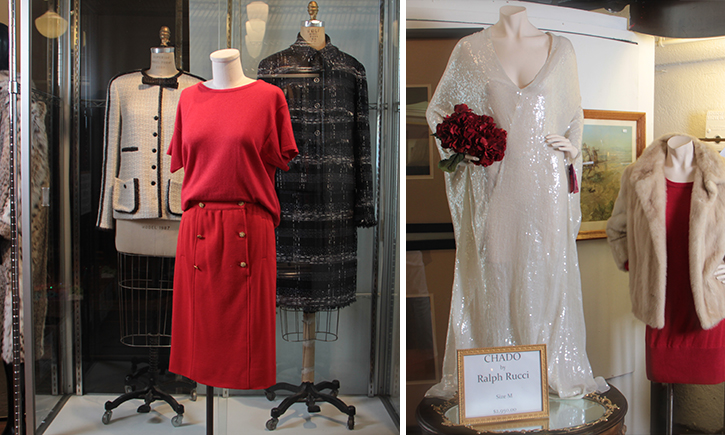 Designer Ralph Rucci supported City Opera by donating a diva worthy sequined gown (right) that would normally sell for 5 figures, but it was marked down here for $2,950. A bit pricey for a thrift find, but still a great deal.

Stubbs & Wooten gave an assortment of summer shoes (below) to Memorial Sloan-Kettering that normally retail for $275 to $400; here they sell for $75 to $80. And your daughters might be happy to shop Angel Street for the racks of clothes donated by the hip fashioner Charlotte Ronson. 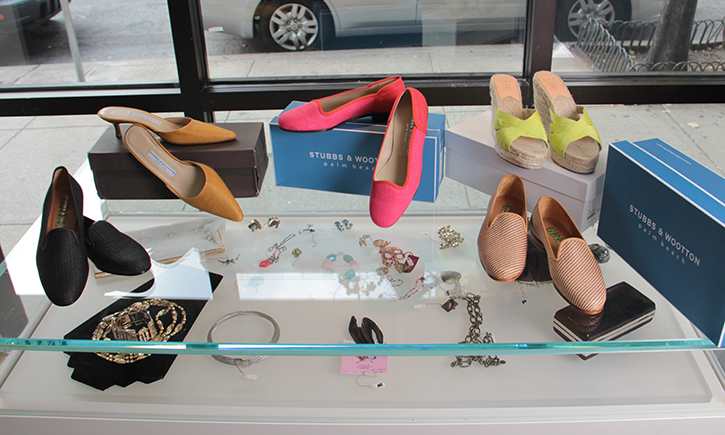 Get friendly with the manager for a heads up when these windfalls arrive. Within hours of delivery, the clothes that Diane von Furstenberg regularly donates from her line to Spence-Chapin are sold out.

Always inquire about special deals. Goodwill has a frequent shopper program. For every $100 you spend, $10 will be applied toward your next purchase. Memorial Sloan-Kettering places top designer clothes in a designated room at the rear of the store. And don’t miss the sale racks upstairs at City Opera. If you find a treasure that is more than you planned on spending, quietly ask the manager if the price is negotiable. But never buy anything just because it’s a bargain if you don’t think you’ll wear it. That is of course, unless you plan to resell at a consignment shop for a profit!

Few shops offer personal shopping assistance. If you lack style-confidence, shop with a fashionable friend or personal shopper. A good one can well-earn her fee by helping you pull together fabulous finds while theoretically saving you thousands.

Don’t despair if you didn’t score on a visit. The experts drop in their favorite shops at least twice a month.

Inspire our NYCitywoman.com sisterhood by sharing your best thrift chic buy and where you found it by posting a comment below.

FOR A GOOD CAUSE

Recycle, repurpose and reuse while supporting your favorite cause by donating clean clothes in good condition. Depending on management costs (rent, free pick-up services etc), typically between 20 and 30% of sales will go to charity. In exchange you will receive a tax credit for approximately one-third of the original retail price, along with a huge sense of satisfaction knowing that others will enjoy what you once did. Several thrift shops offer a free pick-up service.

A few of our favorites:

Cancer Care Thrift Shop: 1480 Third Avenue (at 84th Street). ?Sales support a variety of free professional support services for those with cancer and their families.

Kim Johnson Gross is the author of What to Wear for the Rest of Your Life and co-creator of the Chic Simple book series. She was Fashion Editor at Town & Country, Style Director at Avenue, Fashion Director at Esquire, and columnist for InStyle and More magazines. Visit Kim’s inspirational Fabulous Firsts After Fifty.