New Beau? Check Him Out Online

When Ron began behaving erratically, I decided to look him up on Instant Checkmate’s extensive public records. 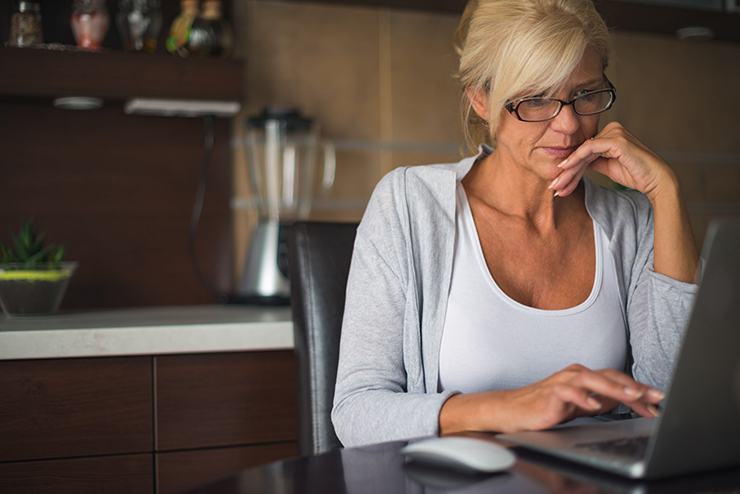 We were seasoned and senior women, Pamela and me, still in the game of life when we met for dinner in my Hell’s Kitchen apartment. I’d been divorced for decades, had grandchildren and several dead-end romances, probably because I preferred an affair to marriage. Yet, my friends trusted my sensible and direct advice about their relationships.

Pamela had been engaged once but never married nor had children. She was 68 and lonely when she wrote “Sunshine” as her moniker on a reputable senior dating website, which was perfect for her upbeat personality and profession as an actor. But after meeting Ron online, their six-year relationship had imploded, leaving her destroyed and inconsolable at 74.

“What happened?” I asked, as she sank into my comfy chair and fluffed her salt-and-pepper hair to frame her lovely face complemented with hoop earrings.

“Ron walked away and never looked back,” she said with trembling lips and tear-filled green eyes. “No response to my calls or emails. Is he dead?” she wailed.

It had been several months since he emailed his Christmas Eve goodbye. He was traveling, as usual, and it arrived hours before their holiday party for 14 guests at Pamela’s Upper West Side apartment. He said he loved her but saw no financial future together after two failed job interviews. Sorry for the pain, but it was over. Pamela hid her anguish during the bash, only to collapse on their bed when everyone left, alone with her grief and primal moans.

I’d met Ron once. He was in town attending Pamela’s performance at Don’t Tell Mama. A few years younger than her, he was a well-dressed corporate guy with passable looks but seemed evasive and standoffish. I didn’t like him especially since she had told me he kept few papers or clothes in the apartment he periodically shared with her, although one stay stretched into 18 months. He claimed a minimalist’s life, storing work-related necessities in his car or at the office. She accepted his peculiar habits because she traveled for her career and lived out of boxes.

When Ron missed some holidays with Pamela, he blamed his adult children. They were scattered in other cities and would disown him if he didn’t visit. She never met them or his friends. Why intrude? He, however, was absorbed into her family and friends’ lives.

“Did you ever give Ron money?” I asked, setting our dinner table and sensing a con man.

“I offered but he refused. But I paid for our vacations and that bothered me. And he didn’t share living expenses like he promised,” she said. “You should have seen the adorable way he proposed to me on one knee.” When a jeweler friend said the engagement ring was fake, Ron was flabbergasted, claiming he’d bought it from a co-worker whose engagement failed.

Who was this senior Lothario, I wondered? But there was something about living in a transient city like Manhattan that allowed strangers to use and bed desperate savvy women who didn’t want to show up alone anymore.

“Have you done an online search of Ron’s public records?” I asked her. I had on past lovers. The process was easy, legal, cheap, anonymous and instantaneous. She admitted to not being tech savvy or suspicious.

I was both, heightened when I met a man on an international flight and ran off with him for two weeks when we landed. Back in the states, we continued as long-distance lovers, as I snooped through his online real estate assets and read his father’s obituary with correct family names. I even found his Amazon Wish List verifying the music he enjoyed. Unfortunately, not included was his alcoholism, which I witnessed firsthand and became the death knell for us.

But he continued to intrigue me, enough to follow his professional demise as a pill mill physician who lost everything. His state’s Department of Corrections records were public so I followed his trail to prison, accessing its layout where I imagined him there. His solemn mug shot produced a late-night chuckle.

On Pamela’s behalf, I could have used many background sites, including Spokeo with its simple and free search that includes a person’s age, probable family members and states where people with the same name live or clicked on Intelius that claims to search 30 billion public records and has an app.

I decided on Instant Checkmate and paid an initial $39, followed by $20 more for extensive public information on Ron or anyone else included in the one-month, background-search membership. What popped up were his former addresses and neighbors; relatives; traffic, criminal and employment records; social media accounts; phone numbers Pamela didn’t have; DUI records, gun permits and more.

His homes led me to free searches of property deeds and his real estate transactions in those counties. Google Maps detailed street close-ups. Real estate sites such as Trulia and Zillow revealed photos (interior shots if ever listed for sale).

Although time consuming and suggestive of peeking in someone’s underwear drawer, I mumbled, “Gotcha, you bastard,” when I printed Ron’s voluminous report.

Pamela sat ramrod straight in her living room’s wingback chair when we met again, insisting I hold nothing back.

“His marital home sold in six months after you met him, not the years later he told you,” I revealed. “He and his wife then purchased a three-bedroom home with a pool in Florida. They still own it today. I can’t confirm they live together. He votes from that address. No social media or LinkedIn profiles, which is strange for a businessman. No bankruptcies or criminal records. I’m sorry, Pamela, but there’s no divorce on file.”

Her anguish was painful to experience. “I lied to you,” she confessed. “He’s not divorced but papers were drawn years ago. He’s $80,000 in credit card debt. I know nothing about Florida or where he votes.”

“How about I create a Google Alert for him? You’ll get an email if he shows up on the internet,” I said. She rejected that or any attempt at revenge.

Pamela recalled grilling Ron hard in their final days about his scarcity of clothes in their closet, job failures, no money and his odd moods. She’d pulled back on their lovemaking. “Am I to blame for his leaving me?” she asked.

“Some of it, yes, but he never should have been in your life,” I said. Maybe he loved her but he was close to 70, a liar, a cheat and probably flat broke. Be thankful she’d dodged a bullet. “Meeting a stranger on a dating site for seniors should be coupled with a background search. Period.”

As I walked home alone in a refreshing midnight mist, Pamela’s text interrupted my thoughts about women who want to be in love at any cost.

Omg…I remember asking Ron why he looked so tan over the last several months. I thought I was crazy. He said he was running a lot—long distance. I believed him. Guess I was terribly foolish, wasn’t I? I missed so many signs.

Judith Glynn is a freelance travel writer and author of The Street or Me: A New York Story. She loves life, which includes her family and  a long career of entrepreneurial projects.