We are each haunted by some harsh imperfect thing that we believe sets us apart. My bonsai breasts are my thing. 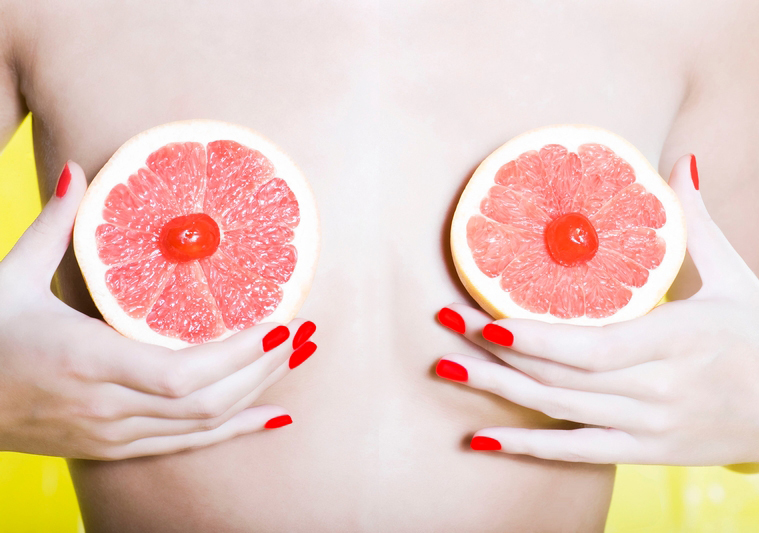 Her name tag said CONNIE, and she was offering to measure our breasts. We were in the fitting room line at the bra store two summers ago, where a sign on the wall warned that 75 percent of women are wearing the wrong size bra.

I wasn’t wearing any kind of bra that day, wrong size or right. I never wear a bra, other than a sports bra when I’m exercising. I was simply in line to keep my buxom sister-in-law company. My breasts are tiny, stunted somehow, for reasons that I’ve never quite figured out. Not just small breasts; bonsai breasts. But the idea of having Connie tell me my bra size was strangely intriguing.

A woman behind me asked to be measured. She was four months pregnant, she said, and she was sure her bra size had changed from normal to humongous.

“My name’s Connie,” said Connie, pointing redundantly to the name tag on her baby-blue smock. “What’s your name?” A nice touch, I thought, an introduction before the intimacy. Next she launched into her canned banter: “I measure here and here, and that’s your band size; I measure here, and that’s your cup size. It isn’t rocket science, but it works pretty good.” Lift up the arms and whip, whip, whip. “You’re a 38-C,” Connie told the pregnant woman, who squealed.

I stepped up. Let’s see how she handles someone like me, I thought, feeling a familiar wave of defensiveness.

“My name’s Connie,” said Connie, repeating her rap word-for-word as she measured me. Then she lowered her voice, something she hadn’t seemed to feel a need to do for Miss 38-C. “Well, your band size is between a 32 and a 34,” she whispered, “and cup size is a Nearly-A.” Sotto voce, she suggested I try a 32-Nearly-A.

Nearly-A. Does anyone even make a bra that small? Isn’t that what we used to call a training bra?

I thought that I had gotten past fretting about my tiny breasts; that I was at last able to think of them as something not to be ashamed of, but something to be proud of—they make me look younger than my age, and thinner, and busty women often tell me that having big breasts is a pain. But when Connie lowered her voice, that stung. She announced everyone else’s measurements out loud. But she was embarrassed on my behalf; by whispering my bra size, she thought she was doing me a kindness, and that’s what hurt the most.

Now, I am not a petite person. I’m tall, five foot eight, and I weigh 141 pounds, plus or minus a few. If I were small everywhere, that would be one thing; my tiny breasts would at least be proportional. But I have long legs and, to my distress, plenty of heft below the belt. I once walked into a store wearing high-waisted blue jeans and a salesgirl who saw me coming actually said, “Wow, that’s a lot of blue jeans.”

But the top half of my body looks like a painting I saw recently at MOMA, an Edvard Munch portrait of a long-haired girl sitting naked on a bed, her arms crossed protectively in front of her. Like the breasts of the girl in the painting, which is called “Puberty,” my breasts are stuck forever at the age of twelve.

John Updike, in a beautiful essay called “At War With My Skin,” once wrote that every major decision of his life was driven by the source of his deepest private shame: his psoriasis. He chose to be a writer so he wouldn’t have to risk exposure to office co-workers during one of his flare-ups. He chose to live in a beach town so he could lie in the dunes year-round and bare his skin to the sun, which dried up and healed his lesions. He chose to marry young because he couldn’t believe, once he had found one beautiful woman who forgave him his scaly skin, that he would ever find another.

It sobers me to think that maybe my own private shame about my appearance was the driving force of some of my big decisions, too. Like Updike, I married young: I married my sweet and indulgent college boyfriend—who called my breasts “pearls” and thought they were perfect—one month after we graduated. Did I grab Jeff so quickly because he loved my lopsided body, and I worried that no one else ever would? Marrying young is often an exercise in insecurity, and when I was 19 my breasts were a proxy for all my insecurities—about my looks, my critical streak, my femininity, my talent, my moodiness, my ambition—just as Updike’s psoriasis was a proxy for his.

Like Updike, I, too, became a writer—a journalist, with a specialty in health and medicine. I wonder sometimes whether my breasts led me to that choice as well. As a science journalist, I write about how the human body works, and how it fails to work; how expectations about function can so easily go awry; how the things we take for granted occasionally derail, bringing us face to face with the unbearable. It’s all related, tangentially, to curiosity about natural variations, which at its heart is wondering how I got this way, so different in at least this one respect from any other woman I could see.

We are each, in our own internal prisons, haunted by some harsh imperfect thing that we believe sets us apart. My bonsai breasts are my thing; Updike’s skin was his. Other people might suffer from things that are less physical, more emotional; a yearning to look at pornography, maybe, or terror when speaking to strangers. It’s not too great a stretch to think that, if I had been a woman with C cups instead of nearly A, I would not have been quite so drawn to writing about the things that make people feel isolated, different, and afraid.

My breast epiphany, when it finally came, happened while searching the internet. I was writing an article about body image, and came upon the Normal Breasts Photo Gallery web site. There I stared at screen after screen of photos of women’s breasts—non-air-brushed, non-sexualized, non-standard breasts, the kind you would see in a locker room at the neighborhood YWCA rather than on a movie screen. No lingerie models here: just a bunch of ordinary women and their ordinary breasts. Lumpy breasts, saggy breasts, misshapen breasts, tiny breasts, huge breasts, breasts of two vastly different sizes, or with gigantic nipples and areolas, or that pointed in opposite directions.

This is what normal is, I finally realized, in all its splendid, flawed, dizzying variety. Scrolling through the images of breasts—each pair with its own brand of poignancy and beauty and, yes, sometimes even ugliness—I felt part of an endless and spectacular parade. It did not escape my notice that the women whose breasts looked the most like mine were in their teens or twenties, but somehow that no longer bothered me. Instead of longing for the shapely breasts, I was finding solace in the small ones, taking heart that there were so many women with breasts like mine, even if most of them were barely out of puberty.

What did trouble me, though, were the statements some of those small-breasted women had sent in to accompany their photographs. “The fact that I have hated my breasts since childhood outrages me,” wrote a 24-year-old woman who, naked from the waist up, could have been a younger version of me. “I am healthy and beautiful and happy, but I have never looked at my breasts in the mirror without feeling sad.” That was me, too; I could recite the facts of my fortunate life, but that didn’t keep me from feeling bereft when I looked at my breasts in the mirror.

Amid all those women’s breasts, though, something changed in me. A tenderness grew, and I wanted to take care of this sad and angry young woman with the tiny breasts. I wanted to take care of myself at her age, too, a 24-year-old Robin who was seething with a similar sorrow. I wanted to tell us both, from the vantage point of thirty years later, that we should stop feeling sad, should work hard to get past the anger and the grief, and should treasure what there was about the body we had and the people who loved it.

I wanted to tell my younger self the truth that my older self is finally, slowly, learning: that “normal” is a vast, forgiving country, and there is room enough.

Robin Marantz Henig is a freelance science writer and a contributing writer for The New York Times Magazine. Her articles have also appeared in Scientific American, Seed, Discover and assorted women’s magazines