“We all come from traditions that are pagan, in the sense that they were based on seasonal cycles.” 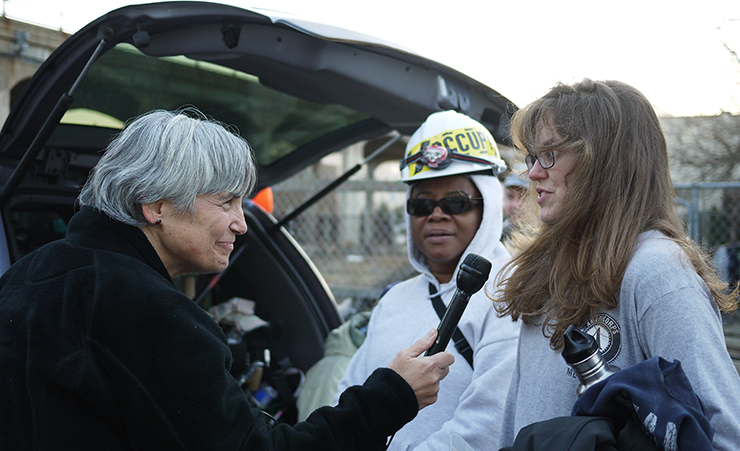 Margo Adler interviewing two Occupy Sandy volunteers who were working on a damaged house in the Rockaways after Hurricane Sandy. Photo by Amy Walters, NPR producer. (Editor’s Note: Margo Adler died in 2014, this article was written in December 2012.)
. . . . . . . . . . . .

At least half a million people in the United States will celebrate the winter solstice that occurs this year on December 21 at exactly 6:12 a.m. Eastern Standard Time. Centuries before Jews celebrated Hanukkah and Christians celebrated Christmas, “pagans” exalted the solstice with religious ceremonies, since for them it signified the day when the sun was reborn. Days became longer and plants sent forth new shoots. Nowadays there are contemporary Pagans (often referred to as Neopagans) who include Wiccans, Druids, and other Earth-based groups. If the word “pagan” rattles, alarms, or otherwise disturbs you, you have probably never met Margot Adler or heard her reports on National Public Radio, where she covers a wide range of issues as the senior New York correspondent.

Margot, 66, a recent widow and the mother of a 21-year-old son, Alex, is a contemporary Pagan. Her salt and pepper hair is cut short with bangs, although until recently she had more predictable waist-length black hair that fell down her back. She has a hearty laugh, an unpretentious, down-to-earth style and a knack for explaining Paganism to uninformed-people like me. She speaks articulately and passionately about her religion, although Pagans do not proselytize.

Margot, whose grandfather was the renowned Viennese psychiatrist Alfred Adler, comfortably straddles the rational world of journalism and the sensuous, nature-based world of Paganism. Though she was trained as a Wiccan and has been a Wiccan High Priestess, she does not refer to herself as a witch. When I interviewed her at her NPR office in Manhattan, during a break in her daily reporting on the aftermath of Sandy, there was no peaked hat in sight.

Rather, she has had an adventurous spirit and a thirst for ritual since childhood. Margot grew up in New York City in an intellectual, non-religious Jewish family. During a class trip in fifth grade she was inspired by a Maypole celebration—she loved the flowers, the dancing, the singing—and as a teenager she was drawn to the feminine powers of the Greek goddesses Artemis and Athena. “My heart was always with the ancient Greeks,” she says. “I’m a Hellenic reconstructionist at heart.” She searched for a religion with no intermediaries, no underlying creeds, no heaven or hell, and she found it in Paganism, which she says derives its meaning from the natural as opposed to the supernatural.

After graduating from Berkeley with a Phi Beta Kappa key, Margot enrolled in Columbia University’s School of Journalism and then went to Harvard on a prestigious Nieman fellowship for journalism. She began her radio career in 1968 and married John Lowell Gliedman, an author, ten years later. She is the author of Drawing Down the Moon: Witches, Druids, Goddess—Worshippers and Other Pagans in America Today, a widely popular book that has sold 250,000 copies; she has also written “Heretic’s Heart: A Journey Through Spirit and Revolution,” a memoir of her experiences as a political activist during the tumultuous 1960’s. (She was among the 800 protesters arrested during a massive sit-in at Berkeley; she helped to register black voters in Mississippi, and she demonstrated at the 1968 Democratic convention in Chicago.)

Nowadays she attends Pagan festivals around the country, where she conducts chanting rituals and what she calls “affirmations.” An affirmation can be thought of as a self-psyching exercise with cosmic overtones. For example, Margot might help someone who is nervous about public speaking by invoking a “power in the universe” and embodying that power within him or her, thereby banishing the anxiety. She ends the affirmation by addressing the four elements—earth, air, fire, and water. Margot also leads seasonal rituals at solstices and equinoxes, conducts “croning” ceremonies that celebrate the aging processes of women, and performs legal weddings.

Chanting is central to her religious practice. The chants may be rounds or spirituals; they may be goddess and woman-oriented, political or based on the elements. They become powerful when they are sung around a campfire or in a drum circle with a group of people. In a chant workshop, “You experience the beauty and wonder of singing and harmonizing, of just being a community,” Margot says. “That’s what ritual really achieves, of course. Not only creating a special place, but you really feel you are communing with everybody else you’re with, and in some cases communing with ancestors.”

In her view, contemporary life has taken us too far afield from the experiences of these ancestors. “We all come from traditions that are pagan, in the sense that they were based on seasonal cycles, the growing of crops, the herding of animals, the celebration of the seasons,” she says. “We’re all searching around in the ashes for vibrant, juicy traditions we can recreate in a way that’s possible in the modern world.”

For Margot, that means being able to “dance ecstatically around a bonfire at night and go to work in the morning” as doctors, lawyers and teachers. She embraces the dichotomy. The weekend before the solstice she will attend a sold-out women-only festival in Rhode Island, which will feature singing, drumming rituals, energy work and an art project. She rarely conducts workshops in New York City, mostly because they are usually held at occult shops and there are “no real fabulous shops” in the city, she says.

Pagan rituals don’t require material objects; however candles, wine, and cookies are “nice to have.” Wiccans and Pagans may also use incense, a rock to represent earth, and a feather to represent air. “It’s all in your head,” she says. “The main thing about a ritual is to create a space, a place that’s separate and apart from the mundane world—making you feel that the place you are in is not just your living room.”

But at Christmas time she celebrates what she calls “the whole Christmas thing,” mostly for the sake of her son Alex. “My home does not look that different from someone celebrating Christmas,” she says. “I have a tree, stockings and mistletoe, which is an old Druidic custom. I might have mulled wine or cider, but there won’t be a Yule log. That’s because there is no fireplace in my New York City apartment.” 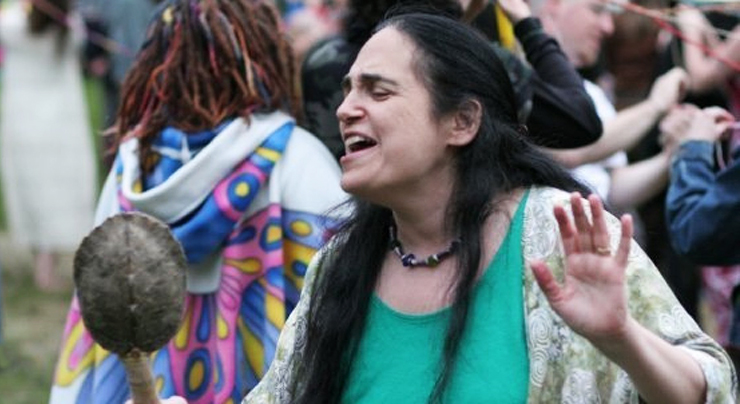 One of the most popular events for Pagans, Heathens and others of diverse beliefs is PantheaCon, a conference attended by more than 2,000 people that is held each year during President’s Day Weekend. The 24th annual PantheaCon, whose theme was “Sustainable, Caring Community,” took place Feb. 16-19, 2018, at the Doubletree Hotel in San Jose, CA. The offerings included more than 200 presentations that range from rituals to workshops and from classes to concerts.

Roberta Hershenson is an arts journalist whose features, profiles, and news stories have appeared in The New York Times and other publications for 25 years. She wrote a weekly arts news column for the Westchester section of The Times from 2000 to 2006.