Frescoes from a vanished world offer a modern take on meanings and makers.
By Maddine Insalaco 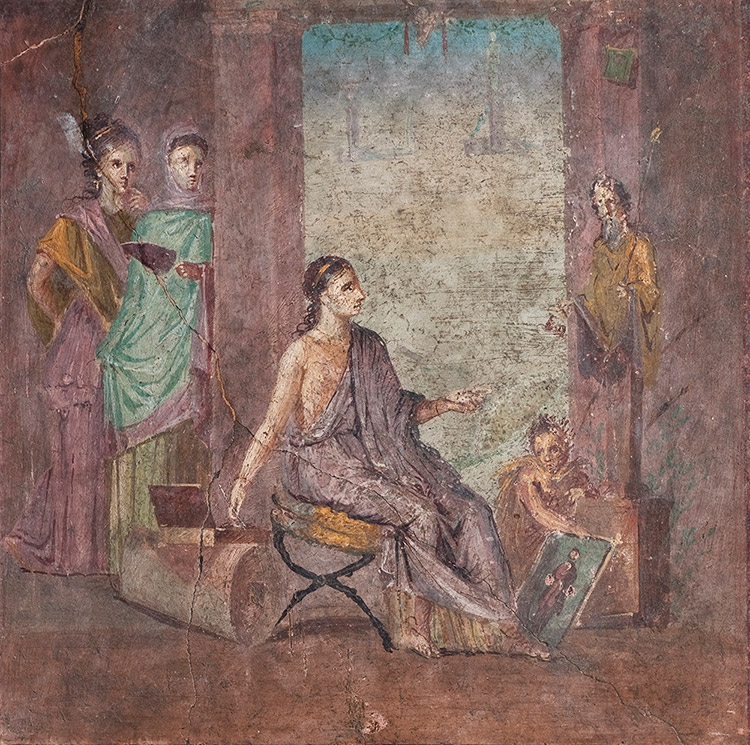 The eruption of Vesuvius in 79 BCE destroyed the Roman cities of Pompeii and Herculaneum, freezing for posterity evidence of life in these sites under mountains of ash and lava—which archeological excavations starting in the 18th century continue to uncover. Visiting them today is literally stepping into the world of Ancient Rome—an opportunity to marvel at the vivid colors and images that showcase the aesthetic of the wealthy and powerful at a precise moment in time. For everywhere, the homes of the affluent were sumptuously decorated with frescoed wall paintings from floor to ceiling.

The current exhibit (sorry, now ended…editor), at NYU’s Institute for the Study of the Ancient World, Pompeii in Color: The Life of Roman Painting, brings a slice of this world to the Upper East Side of New York. Featuring over 40 paintings and artifacts on loan from the National Archeological Museum of Naples, this small but ambitious show aims to recreate, albeit loosely, the experience of a Roman home.

Fresco painting is an ancient art, the earliest examples of which date from about 1500 BCE in Knossos, the Minoan settlement on Crete. The technique remained virtually unchanged through the height of its use by Michelangelo in the Italian Renaissance. This was due to the incredible stability and potential longevity of the finished product. Images literally became part of the walls when the paintings fused with the wet, fresh (fresco) plaster as they dried. Absent weathering by the elements or destruction by human hands, frescos can last for centuries, or even millennia, as the present exhibit reveals. 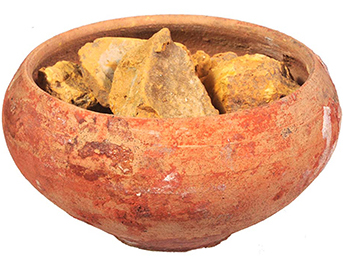 In the first room, we are introduced to the technique of wall painting with a display of tools and pigments found in a home undergoing renovation when Vesuvius erupted. Plomb bobs, or weights, and right angles used along with now-vanished strings were employed by artisans to grid out a wall and proportionally transfer a small design to scale. Pots of ground pigments (right) sourced both locally and from afar were mixed into water with binders and applied with brushes of various sizes.

All of the paintings on view were cut out of the walls either by careless excavation or looting before the advent of modern archeology and institutional protection of cultural patrimony. They were meant to be seen as part of a larger design inside specific rooms in a context that has unfortunately been lost. The show is organized with the intention of restoring such contexts to the extent possible, despite lacking the companion works and the spaces that contained them.

Roman homes were designed to serve both private and public purposes, as reflected in their wall compositions. The images tended to be drawn from a standard repertory of mythological and literary subjects, the meanings of which would be understood by the upper class viewers who had access to them. The selected themes would be a way for the owner to demonstrate his (or her?) erudition, sophistication, and taste. On a formal level, they reflected the values of Roman society at the time. But more subtly, they can reveal something about the owners themselves. What they cared about. Maybe even what they felt. For the contemporary audience, to whom the ancient iconography is largely inaccessible, conjecture about possible meanings allows us most easily to connect with this vanished world and its people. 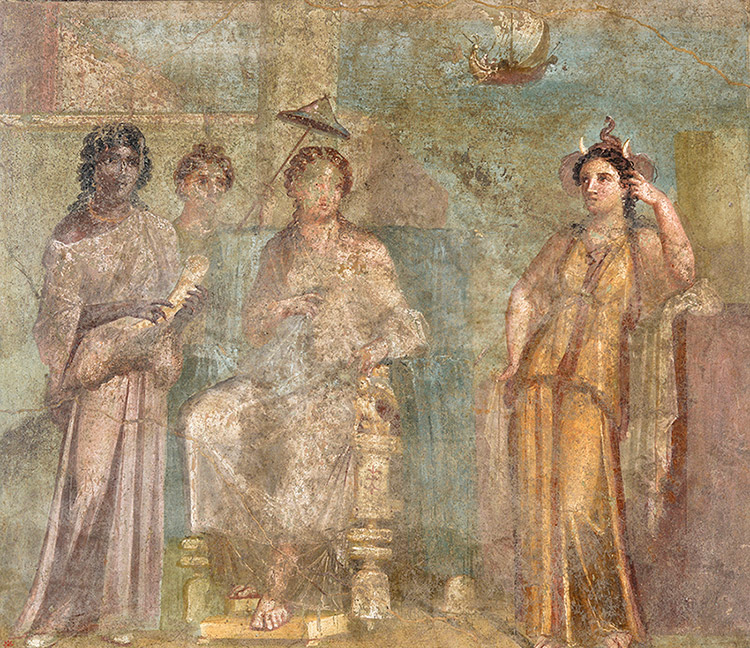 The image of Queen Dido of Carthage taken from the atrium of the House of Meleager offers multiple readings. In a key episode from Virgil’s Aeneid, the love affair between Dido and Aeneas must end so that Aeneas can fulfill his destiny as the founder of Rome. Pictured here, Dido appears enthroned as the responsible ruler dedicated to her subjects, while the small image of Aeneas sailing away to future greatness appears at the top of the frame—a seemingly unrelated incident. On an official level, the painting emphasizes responsibility, fortitude, and dedication—essential qualities valued in women of that period. While nothing is known about who was behind the interior design choices here, it would not be unreasonable to suggest that, like today, this was often the preserve of the woman of the house. In this case, an alternative meaning also emerges: Dido as the quintessential symbol of the abandoned woman. Perhaps this is a message about loneliness from a wife missing an absent husband too busy with the affairs of state to spend time at home. 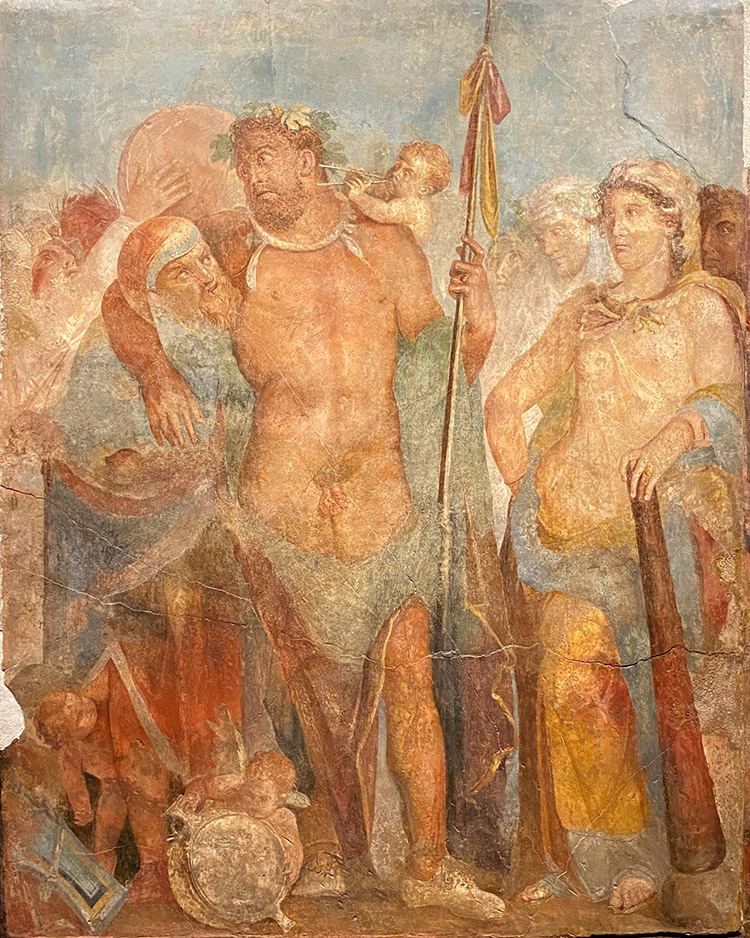 The large painting of the drunken Hercules with Omphale from the triclinium (dining room) of the House of Marcus Lucretius officially served as a humorous warning to guests about the dangers of excess. But consider another interpretation, relating to a lesser known fact about the Greek hero remembered for his marvelous feats. To atone for a wrongful murder, Hercules agrees to be sold into slavery and is purchased by Omphale, the Lydian queen. While the two eventually fall in love and marry, during his tenure of servitude Hercules is made to dress in Omphale’s clothes and do women’s work. She in turn wears the skin of the Nemean lion and carries Hercules’ club. The fresco depicts this hilarious gender role reversal. But the calm, restrained pose of Omphale, naturally donning the hero’s attributes, contrasted with the staggering, intoxicated stance of Hercules, seems an unambiguous statement about who really controls this house!

Insight into the physical world of ancient Rome is offered in a variety of still life, landscape, and portrait paintings. Furniture; writing tablets and scrolls; fruits, fish and fowl: all these images painted from observation give us a glimpse of what daily life looked like. 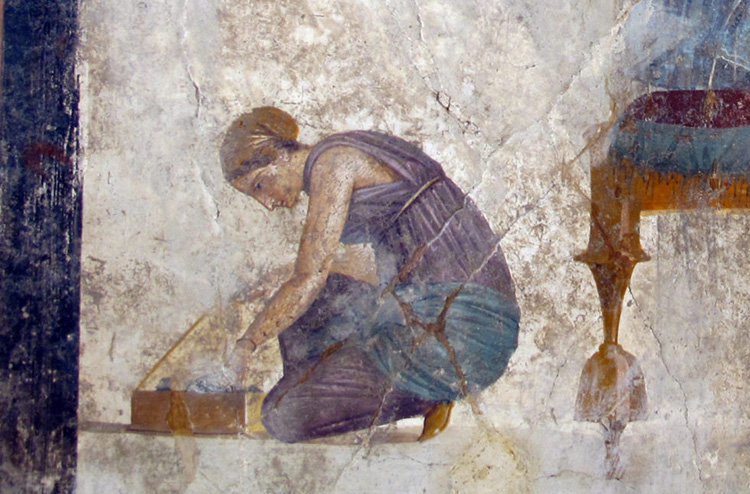 There is a range of quality in the works on display. Some are highly rendered and finished, while others are sketch-like and formulaic. This can depend on where the works were situated in the house. For example, a panel located in the center of an important wall would tend to be of superior quality and finish. In general, however, it was the skill of the artists themselves that accounts for the caliber of the works. Displayed side by side, two large images show what must have been a common theme: Achilles on the Island of Skyros. While the works are very similar and possibly reflect the use of stock compositional templates, the painting from the House of the Dioscuri clearly shows a more sophisticated technique in the modeling of forms and creation of space, as well as a superior ability to endow the figures with emotion. The work from the House of Achilles, meanwhile, is technically crude and uneven in its execution.

There were two categories of wall painters employed to decorate Roman villas. The first were responsible for laying out the grids and background color schemes. This involved arduous physical labor which included setting up scaffolding and moving heavy objects. More highly paid were the image makers–skilled artisans who executed the figure compositions. It is not clear who they were. Given the strength required for the basic wall painting tasks, it seems logical that men would occupy this role.

However, it is not outside the realm of possibility that women were also employed as image painters. In fact, there is evidence in the exhibition itself indirectly suggesting this. The tools on display—plomb bobs, compasses, and even paint pots—are all of slight dimensions, lightweight, and suited for use by smaller female hands. Particularly compelling is the final work in the show, “Painter at Work,” from the House of the Surgeon, which depicts a remarkable image of a seated woman in the act of painting. Intent on her task, she is indifferent to her audience of female onlookers as well as what might even be her own child holding the painting while she works! 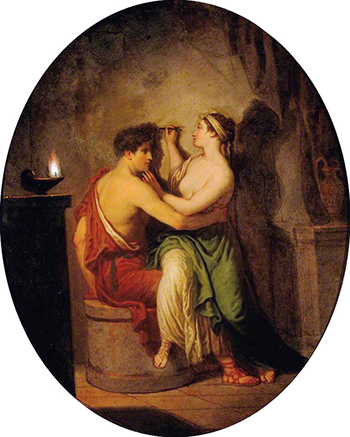 The most famous victim of the catastrophic Vesuvius eruption was Pliny the Elder, whose Natural History not only documents the event, but also recounts the legend of the origin of painting by the hand of a woman. Known as the maiden of Corinth, an infatuated young girl, distressed by the imminent departure of her lover, traces his shadow on the wall to fix him in her memory. The story is probably apocryphal, but seems a clear endorsement for women to paint!

. . . . . . . . . . . .
Maddine Insalaco is a painter who divides her life between New York and Tuscany, where she organizes landscape painting workshops and gastronomic tours with her artist husband. An authority in the field of early open air painting, she has published, lectured, and curated museum exhibitions on related subjects in the USA and Italy. Instagram: @maddine_insalaco.