Fencing: A Unique Sport for Women of All Ages 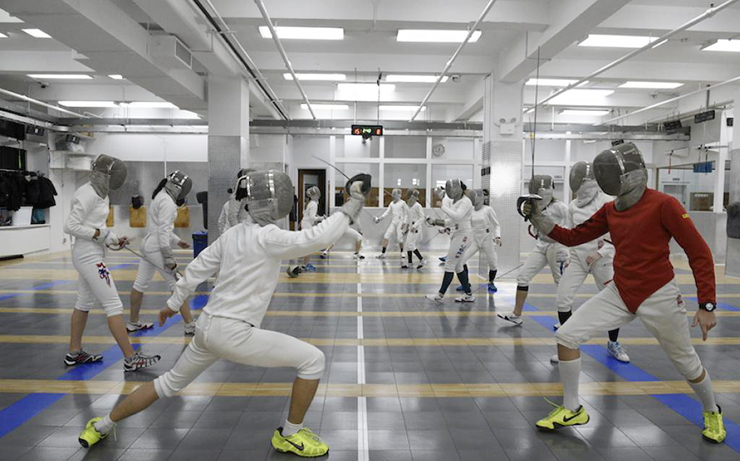 Of the many choices for fitness and health pursuits, fencing doesn’t typically come to mind. Yet this unique sport, not readily understood by many, can be an excellent option for challenging both mind and body as we age. And talk to any fencing coach or fencer and they will say you are never too old to learn to fence.

The sport offers many health benefits, such as increased flexibility, agility, strength, coordination and balance and improved mental focus. It can also help reduce stress. A sport requiring strategic thinking and often referred to as physical chess, fencing has been associated with reduced age-related cognitive decline in a study by the Medical & Science in Sports & Exercise (MSSE), the monthly journal of the American College of Sports Medicine. Fencing is considered a lifelong sport and there are people fencing in their 80s.

Fencing as a sport dates back to the 14th or 15th century when it began to transition from a form of military training to an athletic activity. It was first included in the Olympics in 1896 in Athens and has been part of the Games ever since. The Olympics first featured women’s fencing in 1924 in Paris. The sport features three weapons: foil, épée and saber. Each has its own set of rules and strategies. In a nutshell, foil, the smallest of the three, is a point weapon and only the torso can be targeted, while épée is also a point weapon, yet the entire body is a target area. Saber, an edge weapon, can target any place above the waist. While women initially competed in foil only, it wasn’t until 1996 that women’s épée was introduced with saber following in 2004. Today, women’s fencing in the Olympics has grown and continues to grow.

But putting the Olympics aside, there are plenty of opportunities for women of all ages to learn modern day fencing and even compete on a local, regional and national level if they choose. Sharon Gordon, 58, (below) a former competitive figure skater and avid inline skater, took up the sport after years of watching her son, who is now a college fencer and top rated in the country. “It’s a beautiful and strong sport,” said Sharon, who wanted to try something new that would also help her brain as she aged.

Sharon found fencing to be an amazing workout with its constant movement of back and forth footwork patterns. And since fencers wear three layers of protective clothing, they can quickly work up a sweat. For Sharon, it’s been a big learning curve, but she feels being in shape has helped. She takes an adult group class and a private lesson each week at Manhattan Fencing.

According to Julia Gelman, Executive Director of Manhattan Fencing, around 60 percent of the adult fencers at the club are parents of students in the program or have fenced in the past and the other 40 percent are trying something totally new and loving it. “In order to be proficient, it takes time and commitment like with anything else,” said Julia. Manhattan Fencing hosts annual veteran tournaments (USA Fencing’s 40 and over divisions) and won the national medal count in the veteran women’s category last year. The club offers adult and veteran classes and bouting nights.

“I’d would go every day if I could,” said Sharon, who is a director at Bright Horizons and is also a psychotherapist and a teacher. She intends to add the club’s open bouting sessions on Friday evenings to her training regimen. Even though she has only been fencing a little over a year, she has competed in four local tournaments. In April, Sharon entered her first national competition, the North American Cup/NaC tournament in Richmond, Va. Sharon, along with 22 others, competed in the women’s veteran saber 50+ division. She had selected saber as her weapon of choice because its fast pace suits her personality. USA Fencing, the sport’s official association, sanctions tournaments across the country with veteran divisions that include ages 40-49, 50-59, 60-69 and 70 and over.

At the tournament, Sharon enjoyed meeting women from all over the country who love to fence. The competition itself was quite challenging as she faced nationally ranked fencers. Although she lost 4-10 to the woman who ended up winning a silver medal, Sharon was proud of her achievement at her level and is encouraged moving forward. “I learned a lot and realized the extent to which I need to step up my game,” said Sharon. “I need to fence more, balancing my training by fencing older children who are more at my ability, which is very humbling, as well as other veteran fencers who are my age but stronger fencers.” Next up are the Summer Nationals over July 4th weekend, her last veteran 50 event before aging into the 60s division.

In the winter, Sharon can be found zipping around Wollman rink as early as 6 am. She’s happy that now the sun is up earlier so she can ride her bike each morning in the warmer months. She also takes Pilates classes three times a week, practices the Feldenkrais Method and continues to enjoy inline skating. Like her father, 84, who has recently taken up spinning and plays golf three times a week, Sharon believes that sports keep you young. She plans to keep skating and fencing for a long time. “As long as I can keep my body intact,” she noted, referring to a prior inline skating injury that required major surgery and recovery that sidelined both her fencing and skating. But she’s happy to be in the groove again with sword in hand. Moreover, throughout her fencing journey, Sharon has met interesting people. “You will find the most diverse population of adults and children that you will ever see.”
. . . . . . . . . . . .

While fencing clubs generally focus on youth development, many also offer adult programs. Some specialize in one weapon while others teach all three. Most offer membership and non-member programs, private lessons, group classes and packages. Equipment is usually provided for private lessons and classes. Private lessons range from $50 and up. Check out the free adult beginner fencing classes at Bryant Park conducted by Manhattan Fencing.

For more information on getting started in fencing, check out Fencing 101 at www.fencing.net

Georgetta Lordi Morque is an award-winning freelance writer and public relations consultant who focuses on sports, fitness and health.

You may enjoy other NYCitywoman articles by Georgetta Lordi Morque:

Learning How to Fall Safely

Stand Up! The Road to Better Posture