With accommodations, daily life goes on during this bizarre time. Five New Yorkers tell their stories. 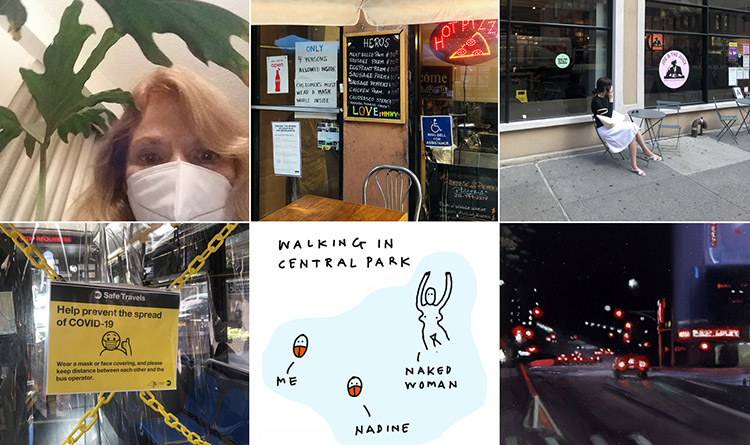 To compile the essays you’ll read below, I reached out to an artist, a writer, an industrial designer, a liturgical musician, and an editor. Each is making do, in her own way. One of them, my NYCitywoman colleague Roberta Hershenson, had a look at the others’ comments and emailed me the remarks just below, which make for a perfect introduction to this article. –Linda Dyett

I feel as though all our impressions are like brief sparks of light reflecting off the thin top layer of a deep and dark glacier. In other words—the reality is depressing, though the coping brings a fleeting sense of pleasure and accomplishment. The painter produces good work, while choruses can’t sing, actors can’t act, friends can’t hug, children can’t be where children should be, and on and on. –Roberta Hershenson

Every Turn of the Wheels

Relief from despair, anxiety and powerlessness in the face of economic catastrophe came to me from the most humble of sources: a bicycle.

At the onset of the Covid-19 lockdown, my husband and I had no viable alternative to staying in New York. We are painters and divide our lives between the city and a Tuscan village where we run painting classes and food tours. But despite having Italian residency and return rights, we had to wait until flights resumed and we found someone to sublet our apartment. So we were stuck here.

Mild panic set in as the realization grew that the events we planned to attend both in New York and Italy were subject to cancellation. My mind raced thinking about the potential devastation that the virus presented. I wisely decided not to let my thoughts go there, but instead to focus on what little was left to control in my life. The obvious answer was painting. Yet here too, a not insignificant logistical problem presented itself. How would we get to our Brooklyn studio from our Manhattan apartment without taking the subway? Walking was not an option, but we did have bicycles in the basement which we had not ridden for twenty years. Not only would they solve the transportation issue, but bicycles would give us exercise now that the gym was closed. Hope set in. 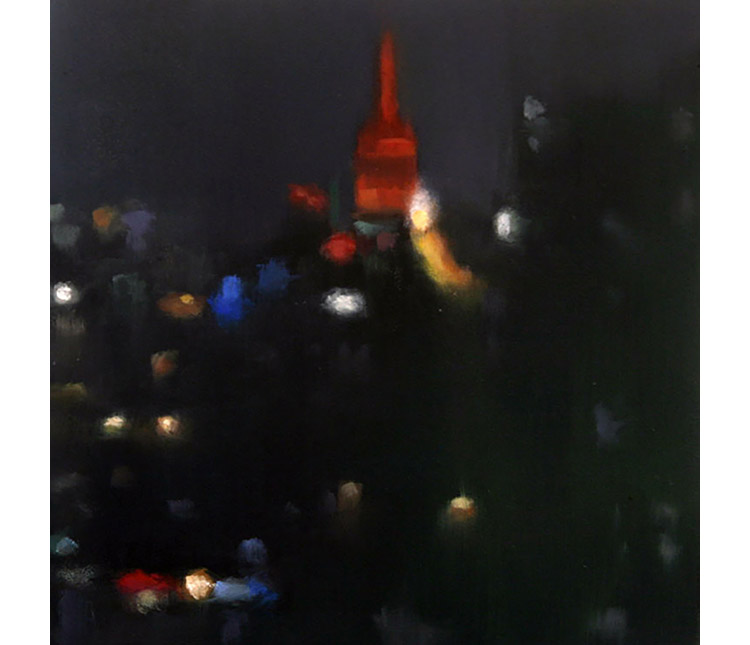 As soon as I hopped on the bike, I felt an emotional shift. Unexpectedly, the movement triggered memories of childhood, when a bicycle offered an empowering experience of freedom and independence. There was a joy racing through the New York streets. Paradoxically, as I grew more physically connected to the city, I became completely disengaged socially, moving about in my own private universe. This social detachment provided the essential pre-condition to focus on painting alone—something I had never really been able to do before. Life had always gotten in the way. The pandemic placed life on hold and freed me up to paint. The bicycle became a vehicle of transformation.

As the world around me reeled from the deepening crisis, I found a sanctuary of peace and calm in our studio. I was relaxed, productive, and happy. With no one else to think about but ourselves, my husband and I lost track of time and abandoned all semblance of having a normal schedule as our studio hours extended beyond sunset. The daily ride home over the Manhattan Bridge offered the spectacle of the streets and skyline by night and inspired a new body of previously unimaginable work. With every turn of the wheels, my relationship to the city become more intimate as I rolled along the contours of its surface through the silent nocturnal streets. I felt as if I was seeing the city for the first time.

Three months have passed, and there is no question that I am in a different, better place, mentally, than I was when this all began. I left for Italy in late June, but the sense of optimism and promise that I began feeling in Manhattan continues here. This is largely due to the empowering experience of bicycling my way through the challenge of the coronavirus in New York. 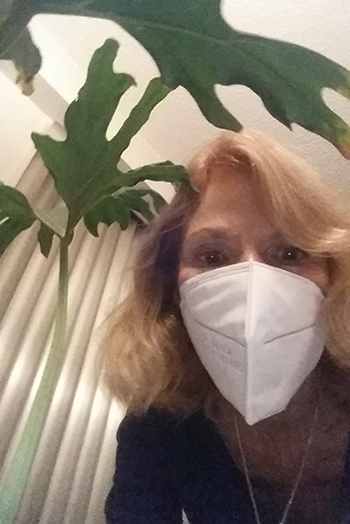 The pandemic mask brings back some of those feelings from decades ago. On the one hand, wearing a mask means no one can see my wrinkles or my now nearly invisible scar. I am hidden, the way I liked it then, when I would sit on the right side of a room to hide my right cheek and present my unblemished left cheek to my classmates.

I grew up feeling people were always looking at me, me, me, and I was continually preoccupied with that delusion. Now, with everyone wearing a mask, I don’t stand out. We are all faceless. The sense of being unnoticed is freeing. No one is looking and no one cares, just as it probably was back then.

On the other hand, my personality has regressed. No one can see me behind my mask, so there is no need to smile. Not smiling makes me feel surly and unfriendly. Maybe I really am unfriendly—more like I felt behind my bandages as a young child. Maybe this pandemic has revealed the real me, an antisocial, unsmiling person, unconsciously reliving yesteryear. Maybe the mask has unmasked me.

People look nice in their designer masks, the designs co-ordinating with their summer outfits. I cling to my medical masks, my N95s, refusing to dress up the obvious—that we wear them in order not to become infected or to spread disease to others. Maybe after months, I’ll give in and wear a fashionable mask. Maybe I’ll smile again behind it.

Roberta Hershenson is a writer in New York. She covered arts and culture for the New York Times and is now working on a mystery novel with a feminist/music theme. 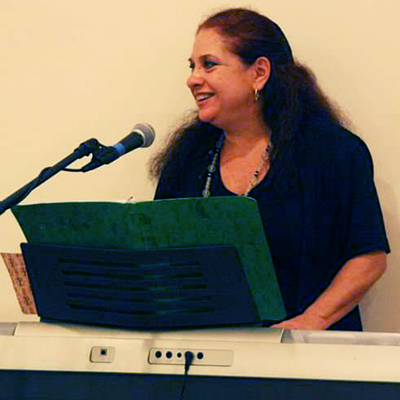 Back when life was normal, I kept a calendar, both as a ritual and a necessary organizing task. Now, the date blocks are mostly empty; there’s simply no need. And though the weather says summer, the actual date is more accurately March 14oth or thereabouts. I no longer count days in the same old way.

Living this way is not unpleasant, and my husband and I (so far) are blessed with good health. Still, the period since sequestration began seems to be one incredibly long and strange day.

Career-wise, I started out as a college sociology instructor, and then, twenty years ago, I fell in love with Judaism and Jewish liturgical music, gradually developing skills as a cantorial soloist, song leader, and music teacher. And I’m one half of a cross-country performing and recording duo. Much of my satisfaction in recent years has come from conducting Sabbath and holiday services for groups of older seniors, and from making music with children in Hebrew school. During Jewish holidays, I find a special joy in using music to enhance the meaning and traditions of our sacred celebrations.

But now we know…singing—even when social distancing—is a Covid-19 super-spreader. So most vocal music-making and ensemble playing is suspended indefinitely. True, some technologies are enabling limited performances, such as prerecorded “virtual choirs.” But for many musicians, time has stopped as we await a confluence of perfectly honed scientific discovery and an effective universal vaccine. Meanwhile, for me, the vocation that I came to later in life, and with such intensity, is jeopardized. Along with so many others around the world, I despair of losing such a treasure of the heart.  And yet, despite the new realities, I sing and I hope. 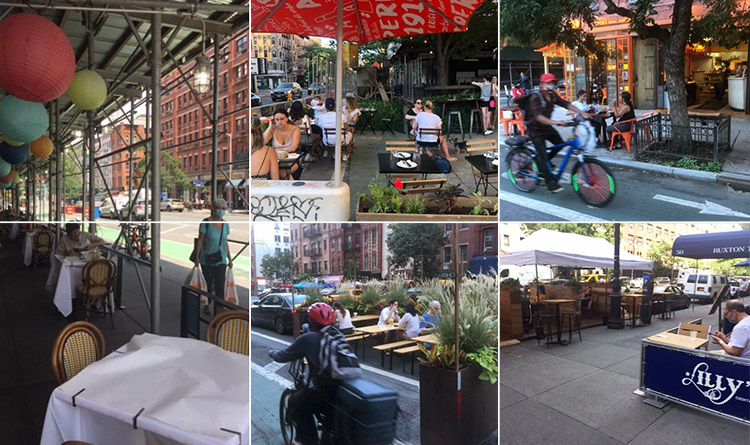 The Upper West Side is trying valiantly to create a new normal. Especially on weekend afternoons, the locals have been out on the streets in droves, settling into the cafes that are now allowed to serve out of doors. No one would mistake the scene for the Cote d’Azur. Lunch at Nice Matin the other day was tasty but noisy: Trucks rumbled along Amsterdam Ave. while impatient drivers signaled their displeasure in the time-honored New York way, leaning on their horns. Seating was arranged under unsightly scaffolding, which seems to have become a permanent fixture here. A little further uptown, at Bella Luna, things were considerably calmer, if a bit cramped, and easier on the ears. On many UWS streets—all around town, in fact—outdoor seating has advanced to the sidewalk and beyond (which the city is officially sanctioning, for now.) Lilly’s Wine Bar now spills out right onto West 72nd Street—prompting an aggrieved local to approach the maître d’ recently and say, “What a waste of a beautiful parking spot.”

But credit some restaurateurs with real resourcefulness: Most of these new patio spaces went up in the blink of an eye—a little plywood here, a trellis there, maybe plexiglass separators between tables, or a tent over the whole shebang. The aforementioned Lilly’s used to be a tiny, nondescript wine bar. Now, with vastly increased seating, all of it out in the open, it’s impossible to miss. On one occasion, a roving singer even stopped by to entertain the guests. Restaurants in this part of city, and elsewhere, are still in for a rough ride; each day seems to bring news of another dining institution closing up shop for good. (Lilly’s neighbor, Le Pain Quotidien, gave up the ghost mere days after the pandemic-dictated restaurant closures, while stalwarts ranging from Fine & Shapiro to the Oxbow Tavern have also gone under—though the former, a classic Jewish deli, will soon be replaced by a branch of Pastrami Queen.) With indoor dining still a distant dream in these parts, you have to root for the dining establishments that are relying on takeout, delivery, and the great outdoors to stay alive.

Evelyn Renold is a writer/editor who lives on the Upper West Side. She provides editing services at evelynrenold.com.

Random Events While Living Under Covid-19 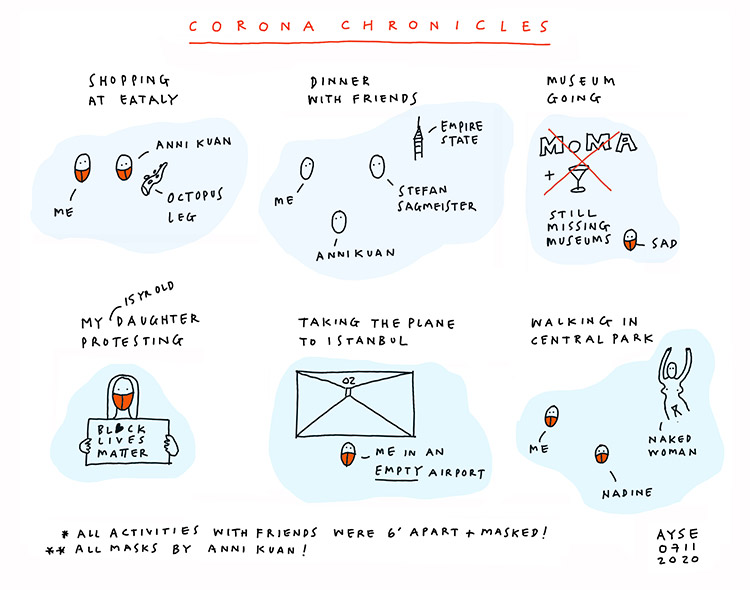 KEY
Shopping at Eataly: My first time socializing in New York after Covid-19 hit was with my friend Anni Kuan, a fashion designer and foodie who inspired me to buy a leg of octopus to make an octopus salad.

Dinner with friends: the graphic designer Stefan Sagmeister, Anni Kuan, and the energy healer Kellie Kulton and I had been having virtual dinners every Wednesday while sheltering in place. This was our first in-person dinner. (Kellie couldn’t come).

My daughter protesting: My teenage daughter told me the hardest and most heartbreaking part of the Black Lives Matter protest was to kneel for 8 minutes and 46 seconds in honor of George Floyd.

Taking the plane to Istanbul: I recently traveled to Istanbul to visit my parents. Traversing empty airports felt surreal.

Walking in Central Park: My realtor friend Nadine Frenette and I have the same birthday, which we celebrated by meeting in Central Park and having a little wine and dessert. Among others we saw was a naked lady!

The industrial designer Ayse Birsel is one of Fast Company’s Most Creative People 2017. She is the author of Design the Life You Love. Her work can be found in the permanent collection of the Museum of Modern Art. Since the pandemic began, she has offered free virtual teas to help those of all ages redesign their life during the new normal. For upcoming events, tools, and tips, join Ayse’s newsletter.