How I went from U-shaped to ramrod-straight 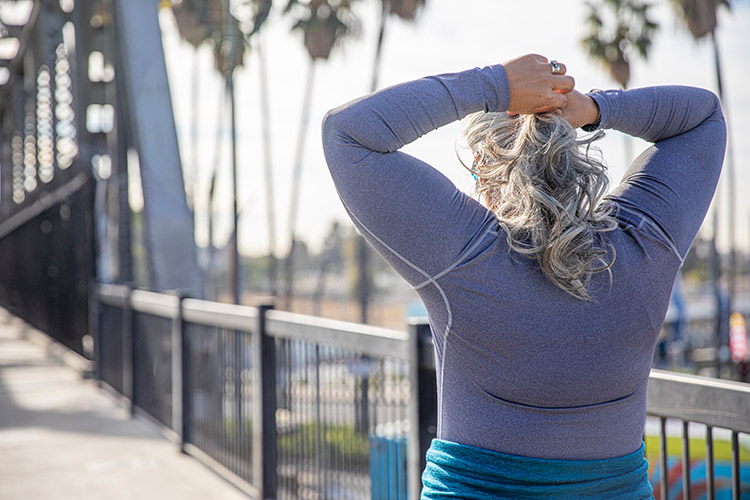 “You gave us a lot of trouble,” announced Mark Henry, senior physician assistant at Mount Sinai West’s Department of Orthopedic Surgery in New York City. “Why?” I asked, several months after I had had back surgery there. “Because you were so twisted,” he replied.

I was twisted because I had developed scoliosis, a sideways curvature of the spine, along with kyphosis, an abnormal forward bend in the spine. Over the past few years, this double trouble had become more pronounced and painful: I was stooped, off-balance and needed a rollator to walk. Orthopedists I consulted, in the early stages of my ‘pretzeling,’ offered an unrelenting drum roll of negativity: All I heard was that I’d get worse but was not a candidate for surgery, because my problems were too complex. “If I operate on you,” one orthopedist told me, “you’ll never speak to me again.”

Yet by 2019, at age 74, deciding that I could not face a bent-over future, I set out to find a doctor who would say Yes.

A friend referred me to a spine surgeon she had seen who specialized in scoliosis, Dr. Themistocles Protopsaltis, at New York University Langone’s Orthopedic Center. His talking points surprised me. After looking at my X-rays, he confirmed that, indeed, I was a surgical candidate. But first, he told me, I should see a rheumatologist, get a bone density test and, if my density was low, take a bone-strengthening drug called Forteo. “After that,” he said, “come see me again,” He referred me to Dr. Paula Rackoff, a rheumatologist, also at NYU. She diagnosed me as having osteopenia, or reduced bone mass, and put me on Forteo for five months—a regime that did indeed build up my bones.

But I also decided I needed a second surgical opinion. Through dogged research plus a bit of luck, I found my way to a doctor whose resume and personality seemed right for me: Dr. Samuel Cho, chief of spine surgery at Mount Sinai’s Department of Orthopedic Surgery.

Dr. Cho said he could straighten my curvature by about 80 percent by performing a spinal fusion. This would correct problems in my spine’s small bones, or vertebrae, by fusing them from the back of my shoulder blade to my pelvis, so they could heal into a single, solid bone. I’d be a bionic woman, with titanium rods on each side of my spine with screws between each vertebra. (Ultimately, Dr. Cho placed two rods on my left side and one on my right, to add stability and reduce the risk of breaking.)

Eventually, following the Forteo regime, we scheduled the surgery for May 29. On D-day, I lay down on the operating table and my world went black—until the next morning, when I woke up in a drug-fueled fog. Dr. Cho was at my bedside, and he told me the surgery, lasting a staggering 10 hours, had been successful. Plus, he gave me a great surprise: Despite saying that he couldn’t straighten my back completely, he had done just that.

Six days later, I was transferred to New York’s Riverside, my rehab center of choice, where I recuperated for a month. For the first few weeks, the pain was excruciating, even with liberal doses of medication. Engraved in my memory is the image of a doctor standing over me while I screamed “Ouch!” over and over again.

Moreover, I didn’t want to drag my aching body out of bed, but three hours of daily physical and occupational therapy were mandatory. And I couldn’t even dress myself at first because I wasn’t allowed to bend or twist. But four weeks later I was once again a functioning adult, wielding my trusty rollator with my ruler-straight back. I went home feeling minimal discomfort, stopped my meds three weeks later, and had six more weeks of PT. Since then, I’ve pretty much ditched the rollator and graduated to a cane, but slowly I’m beginning to step out without it. Now, simply walking is all I need to make me smile.

According to the American Neurological Association of Surgeons, scoliosis affects 2 to 3 percent of the U.S. population, or an estimated six to nine million people. If you’re one of them and want to correct your curve, here are some suggestions, based on my experience, for how to proceed:

Go cyber-crazy There is an embarrassment of riches on the internet. To be an informed patient, ferret out every last detail about your condition and those who treat it. I designated a separate notebook for all things spinal, with tabs for each aspect, including labeled drawings of the spine and surgeons’ credentials. In addition to my own Google-fueled search, my savvy social media nephew introduced me to Instagram and showed me how to find fellow sufferers who’d gone the spinal fusion route. Many other resources, from organizations to chat rooms, can provide facts.

Use your network Ask friends, family, doctors, your third grade teacher, and everyone else you can think of, for information and contacts. You’d be amazed at who might be a resource. My rheumatologist paired me up with one of her patients who had had the surgery. She turned out to be the most meticulous researcher I’d ever met and became my guide.

Buddy up When you go to see spine specialists, take a friend. Two pairs of eyes and ears, as the cliché says, are better than one: While you’re asking questions or listening to the doctor, your pal can take notes. I was lucky: My dear friend Fran Carpentier, a veteran journalist and PR professional, came with me to every visit with Dr. Cho, and is still doing so, months after surgery. Her help has been invaluable.

Be selective I looked for scoliosis specialists at the major hospitals in New York with at least 10 years’ experience in spinal fusion surgery. One major surgeon, too busy to take on new patients, recommended his fellow who was just starting out. I rejected him—no newbies for me.

Get the facts Brainstorm before your appointment with the doctor. Then ask a million questions, such as, “Do you frequently perform surgery on people my age?” “What is your success rate?” “To what extent can you straighten my spine—80 percent, 100 percent?” “How long, typically, is the rehab process?” Dr. Cho listened patiently and respectfully while I fired away at him, and his keen attention cemented my decision to choose him. Also, find out if your prospective surgeon can put you in touch with other patients and call or meet with those willing to talk.

Check out rehab centers It is likely that, post-op, you’ll have to spend some weeks in an in-patient facility, where you’ll get physical and occupational therapy and overall care while recuperating. You’ll probably have to provide a list of choices while you’re in the hospital, so call or visit places you’re considering in advance. Speak to the resident social worker and maybe even a personal care aide (PCA) so you’ll know what to expect.

Be a patient patient Understand that this is a process, not a sprint. Your condition is complicated, and so is correcting it. Many people are involved, and it’s your responsibility to be informed and make this journey calmly, carefully, and with attention to detail.

Margery Stein, a former editor at The New York Times and at several magazines, writes about travel, health, business, and lifestyle issues for major consumer publications. She also consults, edits, and provides content for a range of online sites.