Super-professional acting, glossy production—but do they make a full theatrical meal? Is this play any more than an inflated biopic? 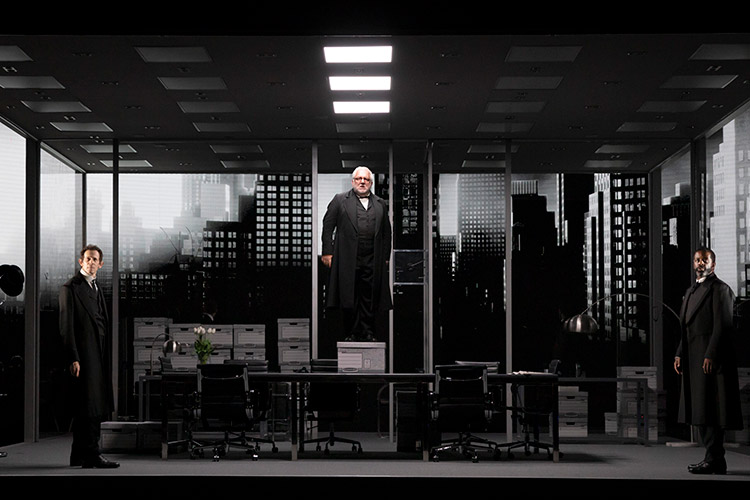 This isn’t exactly a review of The Lehman Trilogy. Even with Covid, the three-hours-plus production has been running off and on to sell-out houses in New York over the past three years, at ticket prices that would make the original Lehman brothers snap their suspenders with glee. (It closes on January 2.) Whatever the play’s flaws, most theater-goers will enjoy it as a bittersweet take on Jewish success in America, a celebration/critique of American capitalism, an epic family saga, a display of super-professional theater—all reasonable ways to look at this lengthy biopic of a play.

And it was lovely to be back in a Broadway theater—in this case, the 100-year-old Nederlander—the original home of The Little Foxes and the first production of Who’s Afraid of Virginia Woolf? My body had forgotten the dizzying heights of a Broadway theater’s mezzanine steps, the hip-hugging seats, the smell of worn carpets—as well as the excitement of sitting packed together like eager kids, waiting for the curtain to go up. What a simple if expensive pleasure!

The first act of The Lehman Trilogy (originally a five-hour, multi-night experience) starts fast and doesn’t slow down. Simon Russell Beale (three-time winner of a Laurence Olivier Award as well as a Tony) recites the exposition (written in a kind of quick-sketch verse) in a light, tripping voice, and soon we’re speeding through Henry Lehman’s arrival from Bavaria to New York in 1844, his original fabric store in Montgomery, Alabama, his brothers’ arrival in 1847 and 1850, Henry’s brainstorm that instead of selling cloth they should invest in raw cotton and sell it to fabric manufacturers—in short, become middle-men. (The play makes much of this discovery, but surely it wasn’t news to a European Jew who in the Old Country was prohibited from owning land or factories.) 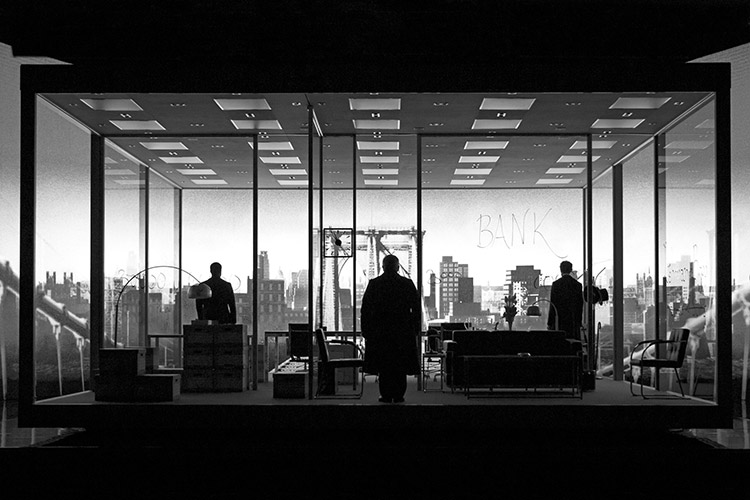 But cotton. That’s the problematic word. Making money off cotton in the South? Before the Civil War? There’s a moment early in the play where the cotton fields around Montgomery catch fire (vividly shown on the wraparound projection screen). One brother laments the cash losses, but the visionary Henry rubs his hands together in a gesture worthy of Dickens’s Uriah Heep: “To restart the farms, the farmers will need seeds, equipment, wagons—and we’ll be there to supply it to them!”

Hmm. After a statement like that, it’s going to be hard to like these guys; and when there’s hardly any mention in the play of who’s been picking that cotton, how is a liberal, even-partially-woke 21st century audience supposed to react? (For a comprehensive look at the Lehman brothers’ involvement with slavery, see Sarah Churchill’s article, “‘The Lehman Trilogy’ and Wall Street’s Debt to Slavery” in the New York Review of Books, June 11, 2019.)

Still, you have to give the Italian playwright Stefano Massini points for taking on this project. How do you dramatize three generations of a family who built a business empire that evolved from selling fabric to buying and selling cotton to speculating in everything from railroads to oil to movies to computers, then developing one of Wall Street’s most successful trading arms and ultimately losing its shirt on subprime mortgages? How do you simultaneously address thorny questions like slavery, intrafamily envy and competition, the decay of family roots and connections as its members become more and more “American”? Most daunting of all, how the hell do you deal with the moral contradictions of capitalism—its innovation and faith in the future vs. its greed, ruthlessness, amorality?

One way is to substitute acting and stagecraft for insight. The Lehman Trilogy eventually looks at most of these questions—but lightly, hastily, irresolutely. In the meantime, there’s plenty of stage-stuff to delight the senses: a sleek, revolving glass box of a set, that wraparound background projection screen, scene-stealing piles of file storage boxes stacked in myriad ways to simulate everything from a Jacob’s Ladder to a coffin to stepping stones in water. The three shape-shifting actors (Beale, Adam Godley, and Adrian Lester—all three are Brits) play men and women, girls and boys, a bawling baby, Southern plantation owners, hipster marketing experts. All of it is well—if facilely—done, though it has to be said that the depictions of the Lehman brothers’ wives and girlfriends are outrageously stereotypical, and played, dare one say it, mincingly.

But those nagging questions remain. Are we seeing a critique of capitalism or a paean to its drive and acquisitiveness? And if we’re seeing both, is this ambivalence presented with enough depth for us to see how it affects the people who live at its center?

Act Two seemed to me the strongest of the three parts. It slows things down a bit and does what drama does best—explore the tensions in and around a family. Playwright Massini and director Sam Mendes focus on Philip Lehman, the pedantic, brilliant son of middle brother Emanuel. Philip takes over as head of the company. Personally cautious yet financially ravenous, he suggests—no, insists, presumes, as only a spoiled rich kid can do—that they concentrate on future ideas rather than faits accomplis. A showdown between Philip and the executive of an as-yet-unbuilt railroad flies as no other scene in the play does, which is fitting: wasn’t it Donald Trump himself who taught us that the dramatic high point of Big Business is The Art of the Deal? Philip’s rapid-fire, no-nonsense joust with the railroad executive neatly encapsulates what was good and bad about 19th century High Capitalism—its visionary reach, and its ruthlessness in pursuing that vision. 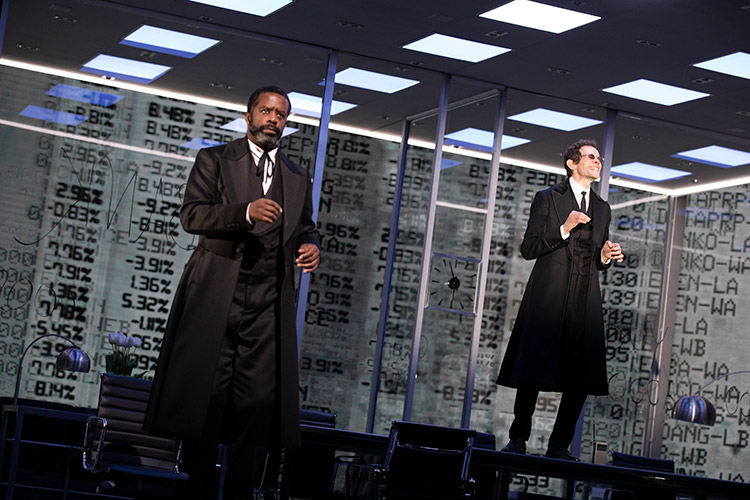 But the third act of The Lehman Trilogy speeds up again, and sort of rushes us out the door. Granted, there’s a lot of ground to cover: the Crash of 1929, the rivalry between third-generation Lehman cousins Herbert and Bobby, the bank’s investments in movies and early TV, the addition of a trading wing, the eventual transfer of the company into non-Lehman hands. There’s an entertaining bit of dance-contortion by actor Adam Godley as Bobby Lehman ages before our eyes—but having such a good time doing the Twist as he amasses money that he’s unaware, so the script tells us, of “the ground coming up to meet him.” The last 40 or so years of the company’s history—its seesawing back and forth between asset management and securities trading—are barely mentioned, its reckless gambling in the subprime fiasco not at all. But no matter. After the death of Bobby Lehman in 1969, Lehman Brothers was indistinguishable from the other Wall Street houses—except that it took a few more risks than Merrill and Goldman Sachs, and ended up the sacrificial lamb of the Crash of 2008. No one really mourned. As the play suggests, there wasn’t time: people had to get back to work.

But what exactly do we experience during those intense three and a half hours? Certainly we see first-rate professional theater, 21st century style. In fact, we’re kind of bombarded by all the professionalism and pyrotechnics that money can buy. But it also feels a bit like going to a fancy but overrated restaurant: the atmosphere is more memorable than the cuisine.

It’s even hard to say exactly what we saw. The play isn’t really a tribute to capitalism, but it isn’t a critique of it either. The success of the Lehman brothers wasn’t totally unique, but it was pretty impressive (and, at the same time, fairly despicable), and the decline of the company they created wasn’t really tragic, but in its way was lamentable. Maybe it’s this very wishy-washiness that accounts for The Lehman Trilogy’s success. For doesn’t it reflect perfectly the confusion that any prosperous, decent-thinking citizen of the First World feels about the system that we all live under—if this life is so good, why do I still feel vaguely guilty? Where did we kind of go wrong?

George Blecher writes for The New York Times and for a number of European publications about American politics and culture. This year, he is a fellow at the CUNY Graduate Center’s Writers’ Institute. See georgeblecher.com