Sex and the Senior Man: Advice from the Experts

How to keep your man’s libido in high gear. 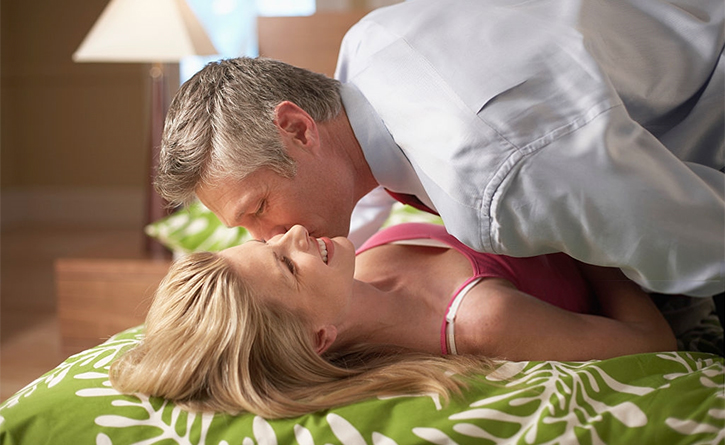 What makes a penis lose its pizzazz somewhere north of 55? Are reliable erections the province of youth only? Can medicine or mojo fix an otherwise healthy man’s broken hydraulics? And how can you, a woman with a healthy libido, help your man recover his?

When Bob Dole went public about his Erectile Dysfunction (ED) in the late 1990s, memorably appearing in ads for Viagra, the first oral medication to help with ED, a formerly hush-hush subject became part of a national conversation. Sort of.

ED—the inability to achieve and sustain an erection for intercourse—is so freighted a condition that many men just close their eyes and change the subject. Your formerly avid bedmate would suddenly rather watch the latest TV series. Reruns, even.

Resist self-doubt or focusing on your own unfilled desires. Of course they must be faced and requited, but for now you’re not the  patient. Get informed. Stay calm. Lovingly rise to the occasion.  Accompany your mate to the right doctor—not one who ignores sexual functioning during an annual physical or hands over a Viagra sample without warning that a high fat meal eaten before may quash the impact and that it won’t work without stimulation. (Some men won’t even tell their wives that they’ve taken Viagra for fear of giving insult, as if the partner wasn’t a crucial part of the equation.)

Sex therapists like to talk about “outercourse” for older couples: kissing, hugging, caresses, orgasm by other means than penetration. For many post-feminist women, this is a fine agenda: warmth and intimacy preserved, and a clitoral orgasm was always the big thing, anyway. Other women are wired otherwise.

Advice From the Experts

Sometimes they see things differently from one another. OK: sex is complicated and it’s good to know that if one approach doesn’t work, another may. We can’t be young again, but we can be latecomers. And so can our men. We are sexygenarians!. As long as we breathe.

NW: Is ED a matter of circulation, hormones, overall health, lifestyle (diet/smoking) or some combination of the above?

Eli F. Lizza, MD: All these risk factors can contribute to ED, individually or together. The main health issues that can impact on ED are diabetes, hypertension, and elevated cholesterol. Most risk factors affect penile function by inhibiting the circulation of blood to the penis.

NW: Is it inevitable at a certain age—if so, what’s the range—or after prostatic disease, even if successfully treated?

EFL: ED is not inevitable simply by age, but it tends to occur more frequently in older men, mainly because they are more likely to have these risk factors. And the longer a man has diseases such as diabetes or hypertension, the more likely he is to suffer the effects of these diseases on his circulation in general and on the penile circulation in specific.

NW: Some men (and their partners) seem to believe that pills such as Viagra create instant erections. Can you kindly set the record straight on the need for stimulation from a partner or oneself? (And any other advice beside the usual cautionary note about cheeseburgers & fries as inhibitors of blood flow?)

EFL: Medicines such as Viagra allow more blood flow into the penis and a better erection. For this to happen, the medicine must be in the blood stream and there must be sexual stimulation to initiate the nervous stimulation to the penile blood vessels. That is why there is a waiting period after you take the pill and when you experience the effects of the medicine. The method of sexual stimulation can vary, although most men find stimulation by their partner to be more intense. Diet and exercise will not only improve general health and stamina, but may in some cases improve erectile function. More importantly, men should be sure that diabetes and hypertension, if present, are under good control.

NW: If the pills cease to work, how easy is it for most couples to approach injection therapy, and what’s the likelihood of success?

EFL: When oral medicine ceases to work, this can be a sign of progression of the underlying cause of the ED. Further evaluation is needed at this point. In general, about half to 3/4 of men who do not respond to oral medicines alone will respond to injection therapy or some combination of treatments. The technique is easy to learn by almost everyone who tries.

NW: Perhaps the next generation will be different, but many men over 60 are skeptical that lovemaking without an erection can bring satisfaction to them and their partners—no matter how many sex therapists sing the praises of “outercourse” for older couples. What do you think?

EFL: I agree with your observation and your hope for the next generation. I encourage my patients to explore alternative methods of affection with and without the aid of therapy.

NW: I know many men, including physicians, who doubt it’s possible or worth the trouble to have an orgasm without an erection. Would you explain the mechanics?

EFL: The nerve pathways for erection (parasympathetic) and for ejaculation (sympathetic) are different, although the nerves travel together at some points. Erection requires increased blood flow into the penis compared to the blood flowing out of the penis. Ejaculation is more reliant on tactile stimulation to the penis.

NW: Viagra, Cialis, Levitra, the others. Does the suitability of an oral helper change as man ages? Is one better than the others for daily use? Does diet affect all the pills or just Viagra?

Joel Block, PhD: I don’t know of any evidence that suggests one vasodilator to be more effective than others in relation to age. I think it’s more about the match between a man’s chemistry and the meds’ chemistry. I do think the question implies that an aging man needs some Big Pharma help. Yes, many men may need assistance, but not because of age, more so as a result of how they age. If a man eats a mostly plant diet (and not too much), exercises regularly with decent vigor, manages stress well, doesn’t smoke and has an optimistic attitude as well as a partner he is still attracted to, pills are not going to be necessary on a regular basis.

Randall Stickrod: Cialis already has a program of daily administration . . . anything that contributes to spontaneity is a good thing!

Diana Wiley, PhD: A heavy meal will take blood for digesting and impede it for the penis. Eating lightly before sex is a good idea.

NW: When the pills stop working—say, when a man is in his 80s or there are medical reasons not to use them, what about injection therapy in the penis?

JB: Well, more emphasis on that almighty erection—and I realize I am in a distinct minority, after all, why should those who have followed a less than ideal health regimen be penalized? That is NOT my intent. My clinical experience with injection therapy: First, the needle gauge is very thin, so while “sharp object and penis” in the same sentence is off-putting, to say the least, I’ve spoken to many men who adjusted quite well. Since the medicine is direct, not systemic, the result is better than the pills.

MC: Some men might go for injections, but urologists I’ve talked to say the typical guy who uses them is much younger. Men in their 80s can still make love (cuddle, kiss, hand jobs, oral, toys) but not too many elderly couples continue to have intercourse.

RS: The injection method strikes me as inimical to the spirit of the intimate sexual encounter. This seems a tipping point issue to me—if one is at the stage when an injection is necessary, I’d start thinking about alternatives to ordinary intercourse. A tough call, admittedly. Anything for an erection! Our poor male psyches!

DW: Most men who really need injection therapy overcome the ick feeling of a (fine gauge) needle in the penis. The prospect of having intercourse may override everything! Sometimes the female partner can help with the injection—thus eroticizing it.

NW: How can a woman help a man reach orgasm without an erection? Especially if the guy is turned off by vibrators?

RS: It strikes me as not particularly worth the effort. The purpose of sex should be pleasure, not just orgasm.

Goodbye to All That?

NW: Is there a time when wisdom dictates saying goodbye to sex? Do you know any end-of-sex ceremonies?

JB: I suspect there are more couples—older and not-so-old—living a non-sexual existence than one would guess. Are there stats on this? Probably, but I don’t have them handy. Unfortunately, for many couples in my experience, when sex ends, sometimes the baby goes out with the bathwater—affection dries up as well. The reasons for sex ending vary—health concerns, an unspoken, but mutual lack of attraction—for example, the couple have evolved more like sibs, or one is more like a parent, the other the child (but too much of other assets remain to end the marriage), chronic but unexpressed resentment, etc. Rituals? What, like throwing a “we’re not gonna fuck anymore” party? I’d settle for an intelligent, honest discussion, no need for champagne. Well, on second thought, why not! And why wait for MJ to be legalized in NY, light up as well.

MC: Sex is a gift that lasts a lifetime. No one has to say goodbye to it.

RS: I would prefer to keep my head in the sand on this one and not even think about it until it rudely trips me up.

DW: I tell my clients, sex does not equal intercourse. There are so many other pleasurable things you can do! Steer clear of common turn-offs. Don’t blame. If possible, a couple should remain sexual forever in some form. Cuddling, for example, increases oxytocin. One British study found that men who reported having three or more orgasms a week experienced 50% fewer heart attacks… perhaps because orgasm triggers the release of the hormone DHEA, which helps with circulation and arterial dilation. Yes, sex is good for your health!

Saving Your Sex Life A Guide for Men with Prostate Cancer, by John P. Mulhall, M.D. Dr. Mulhall sees ED patients and their partners by appointment at Sloan-Kettering Memorial Hospital in Manhattan.

Books and articles by Joan Price

Nancy Weber, is an experienced caterer who enjoys writing about food. She is a prolific writer who has written 23 books including Life Swap, and is currently writing Party Math, about the how much and how many of entertaining.