“Now, everyone is here. This is the tale of a renaissance,” says tour leader Cindy Keiter. 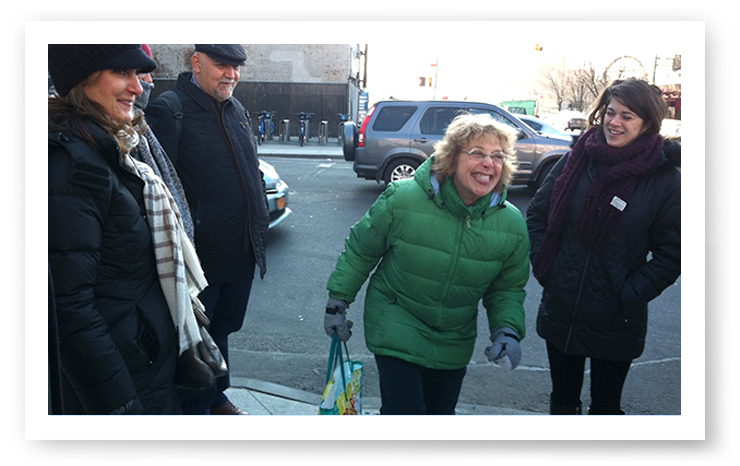 There are stories that run under the cobbled streets of the Meatpacking district, up along the High Line and within the walls of the sprawling Chelsea Market. Cindy Keiter knows them all. 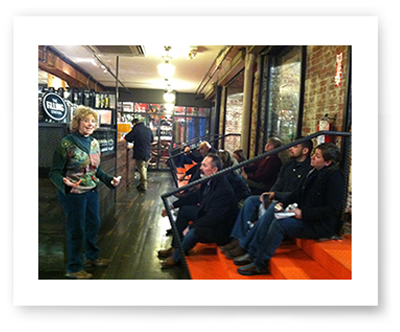 “Some people knit,” says Keiter. “I eat up the city in terms of culture, history and food.” If Keiter has an hour free, she’s at the Museum of the City of New York, reading every plaque and caption so as not to miss a word or she’s walking a neighborhood just to learn it, listening closely for the stories it tells. What she loves most—as a guide at Foods of New York Tours—the popular food tasting and cultural walking tours—is passing those stories on to others.

On this chilly morning, she greets 10 people from upstate New York, Texas, Australia and Turkey gathered in the Chelsea Market for a three hour tour of Chelsea and the Meatpacking District. She warms them up with a “G’day mates!” Keiter’s first career is acting; entertaining a crowd is second nature. “Some days I’ll have people from New Haven, Rome, the Upper West Side and Berlin,” she says. “So many times a New Yorker will say ‘I’ve been walking this city for 20 years and I never knew that!’ I love when that happens.” 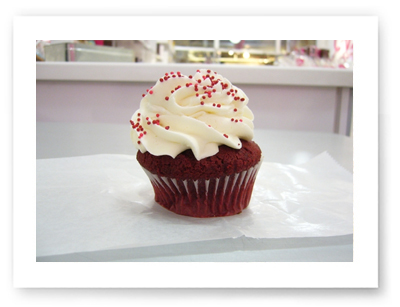 The tour, equal parts tasting and exploring, “starts backwards with dessert” at Eleni’s with a red velvet cupcake (right) and washed down with chocolate milk across the market at Ronnybrook Dairy. Then her group hopscotches over to Dickson’s Farmstand Meats for steak tartare on potato chips and later, an artisanal grilled cheese with fig jam at Lucy’s Whey (below). “This is not your mother’s grilled cheese,” she says.

“Delicious,” several on the tour say, as they tuck in.

All the while, Keiter teems with information: The Chelsea Market (below left) was once home to the National Biscuit Company where the Oreo cookie was invented. She points to a bank of windows where a steam train once passed back and forth, transporting flour, sugar and cinnamon to the bakers below. At a million square feet, it is the longest indoor walking space in the city, home to the Food Network, MLB.Com, Google and NY1. 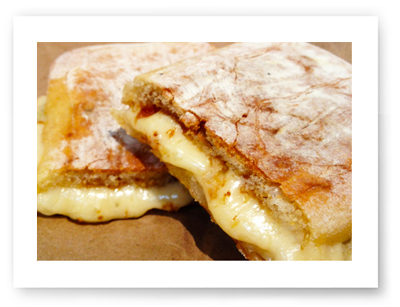 Later, on the Highline (below right), she stops to let everyone take in the spring beauty of the city, the Hudson River and the Empire State Building off in the distance. In the streets below “there used to be 200 meat packing businesses,” she says. Now, there are seven and, in their place, an array of shops, artisans, restaurants “and Stella McCartney dresses.”

She shares the story of Irwin Cohen, who envisioned a new life for the former National Biscuit Company and the desolate stretch around it, and developed the Chelsea Market in the 1990s. She also tells the story of the High Line, now one of the city’s most-visited public spaces. “Not too long ago,” she says, “if you were headed down to the Meatpacking District, you weren’t telling anyone why! Now, everyone is here. This is the tale of a renaissance.” 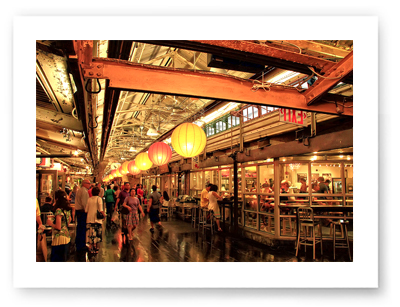 Hers is the story of renaissance too. One of five children whose father was the renowned sportscaster Les Keiter, she lived in Pennsylvania, New York and Hawaii, studied acting at NYU and then acted in L.A. When she returned to the city 15 years ago, she sought work that would complement her acting life. Knowing Keiter’s encyclopedic knowledge of the city, a friend suggested, “Why not be a tour guide?”

“I discovered you had to take a test with the Department of Consumer Affairs, which was intimidating,” Keiter says of the 150-question test. “I boned up on the history of the city for a few months and when I felt ready, I had about nine cups of coffee and said ‘Give me the test.’” 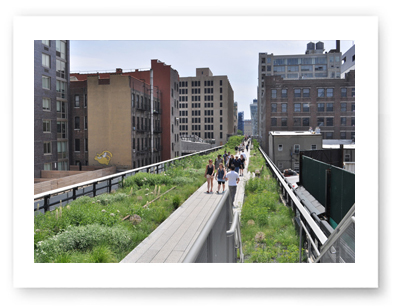 She passed and became an independent contractor with a sightseeing guide license and called Todd Lefkovic, who had recently started Foods of New York Tours. She was his first hire. “She was a natural,” he said. “She’s quirky; she’s intelligent; she knows so much about the city and she’s fun.” He was particularly taken with her exuberant warmth, noting that he once saw her and a tour group ambling down Bleeker Street. “Cindy was hugged by 10 different people,” he says. “People were running out of their shops to see her, or they lived in the neighborhood and had to say hello.”

On this day, her charges are equally charmed. “She’s a walking Google,” marvels Margaret Deme of Brisbane, Australia.

“She has a great sense of humor and she’s inclusive,” adds Andrew Deme. “She makes sure we all feel part of everything.”

Emily Haelen, of Middletown, New York, who is interning with the Mets, says the tour made her want to try more foods and venture all over the city. “She gives you history and all these fun facts!” 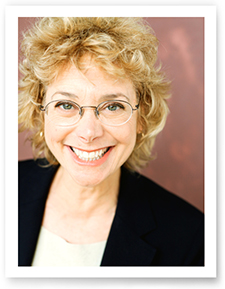 The schedule gives Keiter plenty of time for auditions, acting and creating. She just finished filming the movie Maybe There’s A Tree?, is acting and also writing “Recreating Keiter,” a solo theater piece featuring true stories from her life that are intermingled with a fantasy baseball game. Her father, who called some of boxing’s biggest matches, was known for his brilliant re-created, play-by-plays of baseball games taking place across the country, using box scores and sound effects.

She encourages women on the right side of fifty to turn a hobby or passion into a second career. “Why not? Finding what you like and going after it is what makes it fun to walk this earth,” she says. “Now that can be easier said than done, but if anyone told me that I was going to guide tours in New York City in between acting gigs, I never would have thought it.”

She calls the tours a walking party and the best part? “I meet people from all over the world,” she says. “I’m the luckiest kid in the city.”

Cindy Keiter’s been to more restaurants than she can begin to count, but here she shares four favorites. All located at or below 14th Street, they’re a mix of upscale and casual. “Keep in mind,” she says, “if it’s a holiday they all need to be called for their specific menus and reservations are a must.”

PALMA 28 Cornelia Street. Dinner entrée: $20 to $32. “Palma gives you a real feeling of being in Italy near a vineyard,” says Keiter. “The garden, if available, is a must. Whether you’re a vegetarian, meat or fish eater- mmmmm! It has a very neighborhoody, family feel.” Concurs Zagat: “Sicilian cooking made with loving care.”

OLD HOMESTEAD STEAK HOUSE 56 9th Avenue. Steak on the bone: $47 (for one) to $98 (for two) New York magazine called it “the definitive old-school Meatpacking District steakhouse” or, as Keiter says, it’s for diners wanting to go real simple and primal. “To be sure, it’s also pricey, but you will get what you pay for—terrific creamed spinach, steak medium-rare, a fine bold glass of red and—don’t talk to me, I’m eating!” she enthuses. “The shrimp cocktail, wow!”

FIG & OLIVE 420 West 13th Street. Dinner entrée $20 to $28. Says Zagat: “Small plates with big flavors are the draw” at the restaurant which has a “high-energy nightclub atmosphere” and olive oil featured in nearly every dish. “I try different dishes every time I go and they are great to share,” says Cindy. “Wonderful for either a romantic couple or a larger group. And twenty-five wines are available by the glass. Everything says, ‘Taste this!’”

MORIMOTO 88 Tenth Avenue. Dinner entrees range from $26 and up. According to New York magazine “Masaharu Morimoto, one of the reigning Iron Chefs and an original executive chef at Nobu, brings a formidable array of weapons” to the restaurant.” Zagat agrees, praising its “unforgettable Japanese cuisine.” It’s also one of Keiter’s favorites: “There’s something for everyone thanks to Morimoto’s amazing inventiveness—meat, fish or veggies. Lamb carpaccio is a highlight among all the other amazin’s!”
. . . . . . . . . . . .

Jackie Fitzpatrick Hennessey has written for The New York Times, The Washington Post, and many other publications. She blogs at jackiefitzpatrickhennessey.blogspot.com and eachdaynewgrace@tumblr.com.

You may enjoy another NYCitywoman article by Jackie Fitzpatrick Hennessey: